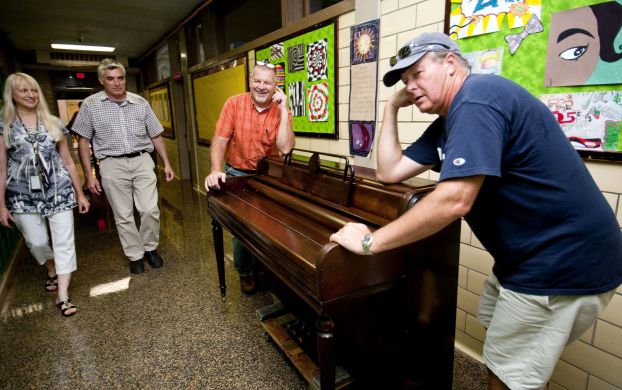 SALISBURY — Before Jonathan and Banks Kluttz lifted the Wurlitzer piano onto a dolly and rolled it down the truck ramp, Banks flexed one of his biceps for a picture.
“Get that, get that,” Banks urged the photographer.
The Kluttz brothers — kingpins of Kluttz Piano Co. — soon rolled the dark wood piano onto the sidewalk in front of North Rowan High School and headed for a door propped open for them.
Inside, they followed art teachers Cheryl Savage-Mazza and Jim Janish down a freshly buffed hallway and into a room where advanced and intermediate art classes will spend part of the coming semester putting their creative touches on the piano.
Next spring and summer, the North Rowan masterpiece will join seven other pianos located throughout downtown Salisbury. Not only will the pianos become public art, they will be tuned, working pianos made available to passersby who want to sit down and tickle the ivories.
In fact, that’s the name of this Salisbury Symphony project spearheaded by Mary Miller James. She calls it “Come Tickle Our Ivories.”
James, whose term on the Salisbury Symphony board just finished, said she got the idea from her sister Libby Fitzgerald, who “just pulled it off” in Lynchburg, Va.
“And I always like to copy my big sister,” James said.
James described “Come Tickle Our Ivories” as a partnership between the symphony and Rowan County’s high schools.
She has enjoyed great cooperation from art teachers, plus strong support from Downtown Salisbury Inc., the Public Art Committee, downtown merchants, Walmart and RowanWorks.
The pianos go beyond public art projects in other towns that have featured, for example, things such as decorated cows and pigs.
“These (pianos) will be interactive,” James said, “where anyone can sit down and play anything from chopsticks to Chopin any time during the spring months.”
Several other cities in the United States have incorporated pianos into their streetscapes with resounding success, James said. She thinks this will be the first public art-piano project in North Carolina.
“Apart from feeling this will be a terrific way to enliven our downtown,” James said, “I guess my innate networking gene thinks it will also be a wonderful way to showcase our student talent, as well as unite our often polarized city and county.”
Art students from seven high schools in Rowan County — East, North, South, West, Carson, Salisbury and Henderson Independent — will decorate the pianos.
James envisions an eighth, “prop” piano being placed near the Square to act as a sign post or kiosk, directing pedestrians to the locations of the other pianos. It will not be a working piano.
Artist Marietta Smith will be painting that one.
All eight pianos are being donated. Kluttz Piano Co. volunteered to move the pianos from the places making donations to the high schools.
The Kluttzes will pick them up again after they’ve been painted.
The local company also will be tuning each piano later for what James said is “a dirt cheap price.”
On Tuesday alone, Jonathan and Banks Kluttz picked up four pianos from private residences and delivered one each to East Rowan, South Rowan, Henderson Independent and North Rowan high schools.
James says seven downtown locations “with sufficient overhang protection” will serve as sites for the pianos. Right now, those places include Textile Products, Anna Lu’s Children Consignment & Gifts, Maia’s Fashions, the Meroney Theater, Salisbury Wine Shop, the Empire Hotel and Creative Teaching Aids.
Besides the pianos being available for random play, James envisions evenings of mini-concerts, in which schools could supply their music students to play at the pianos. Maybe the same thing could happen with colleges and churches, James said.
The exact date for when the pianos will be placed downtown has yet to be decided. James expects it to be May or June 2015, with the pianos remaining downtown into September 2015.
The pianos would be rolled inside at their locations overnight.
Walmart contributed a $200 gift card per school to help in the purchase of art supplies for each piano. James is still trying to solicit other sponsors to go with generous individual contributions she already has received from her husband, Will, and Dr. Don Fortner.
James said the money raised will go toward covering costs, supporting the symphony and, “if we raise a bunch” — helping the high school art departments.
Too often, James said, art teachers are dipping into their own pockets to pay for supplies.
The four pianos donated Tuesday came from Cathy Holladay, Mary and Randy Padavick, Lori and David Watson and Scotti and Billy Webb.
Jonathan Kluttz, owner and president of Kluttz Piano, judged the Wurlitzer that was delivered to North Rowan High probably dated back to the mid 1940s or early 1950s.
Savage-Mazza and Janish said they will incorporate the piano project into the art curriculum. Besides that, it gives their students an opportunity to do something for the community.
“We always try to make everything relevant,” Savage-Mazza said. “This will be relevant. We were glad we were brought into it.”

Wineka column: After Afghanistan tour, there’s no place like home for Spc. Mills

SALISBURY — As he picks out the melody on his guitar, Army Spc. Thomas Mills sings a song he composed... read more