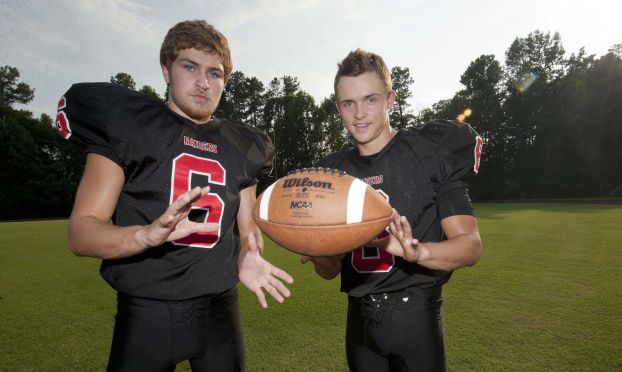 LANDIS — South Rowan quarterback Aaron “A-Rod” Kennerly held his breath the first time he got smacked in the Raiders’ scrimmage with Mooresville.

But then he got up and he smiled.

“I was a little anxious taking that first hit,” Kennerly said. “But I feel really confident now. I’m healed, and everything feels great. I put in a lot of work in the offseason with (QBs coach) Bobby Myers and (strength and conditioning coach) Jan Dowling, and I’m as ready I can be for a good season.”

A healthy Kennerly is where a South comeback — or at least a step in the right direction — has to start.

Jason Rollins agrees with that assessment. He’s convinced Kennerly’s injury was the first snowball in an avalanche that eventually buried the Raiders.

“When A-Rod was healthy, we were moving the ball and he was very important in our being able to run the ball because he has such good control of our offense,” Rollins said. “We lose him, and then our running game starts to diminish with the injuries, and then our defense is on the field all night, and those kids just wore out. That’s when some of the scores against us got outrageous.”

Outrageous is not too strong a word.

Four of South’s last seven opponents scored 60-plus, and South broke school and county records for points allowed in a season. In 11 games, South allowed 540 points. The fewest points any opponent scored was the 34 that SPC champ and 3A state runner-up Concord put up, and you have to believe the high-powered Spiders were cruising.

But Kennerly is healthy now, South has a large senior class and has a decent number of proven players back. There’s also reason to believe that three transfers, plus some better-late-than-never football comebacks by some of the school’s better athletes are going to help a lot.

“We’ve had some great additions,” Kennerly said. “More speed, for sure.”

Actually, if South stays healthy — and ‘if’ remains the biggest two-letter word in the world — there’s not much doubt the Raiders will be a better team than they were a year ago. It remains to be seen if being better will translate into a few victories.

Kennerly played six games as a sophomore after Nathan Lambert was injured, and he played six more as a junior before he got hurt. That means he’s basically played the equivalent of one full season and he’s thrown for 1,667 yards and 13 TDs with just three picks. This kid is a well-above-average prep QB.

If there was a silver lining in the black cloud of Kennerly’s injury, it’s that Heath Barringer, who was a sophomore, took Friday-night snaps in three games. Under tough circumstances, he completed 19 passes, three for touchdowns.

Barringer is a year older now, and should be a contributor not only as an insurance policy for Kennerly at quarterback but as a receiver and maybe as a defensive back.

“Heath’s a good athlete and he’s going to be on the field,” Rollins said.

Dominique Bost (72 carries, 251 yards, 2 TDs) leads the returning rushers. Bost had more than half of his season production when South played a competitive game at home against Northwest Cabarrus.

South is in pretty good shape at running back, definitely deeper than a year ago. Jamorya Cousin, a sophomore transfer from A.L. Brown who is the only soph on the varsity roster, adds speed.

So does Joey Stanback, a transfer from Myrtle Beach. Stanback will start at outside linebacker on defense, but he’ll also get some carries. Alex Parham, a starter at defensive end, will get calls to run the ball in short-yardage situations.

“If we need a yard, Alex will get that yard,” Rollins said.

South will be mostly a shotgun spread team. The Raiders will use a one-back, four-receivers package, and they’ll also use some sets with three-receivers and two running backs.

“Depending on the type of team we’re playing,” Rollins said.

The receiving corps gets a big boost from the addition of basketball players Qwan Rhyne, Tireek Wilder and Alec Stewart.

“I haven’t played since middle school, but I just wanted to play everything as a senior,” Wilder said.

Rhyne, Stewart and Wilder are seniors who have been away from the game, but they’re athletes. Rollins has been impressed with the trio and said Stewart, the son of Cox Mill football coach Craig Stewart, has “very solid hands.”

Two more newcomers in the receiving corp are Weston Tucker and Alex Helms, a transfer from New Bern.

On the offensive line, South will build around two experienced players — burly Eric Finger and Reagan May, who looks taller than his listed 6-foot-3.

Those two will probably start the season as the tackles, although Finger has experience at center.

The centers are star baseball pitcher Blake Johnson, a junior, and Jacob Eudy, a senior.

Depth will be provided by Zack Bowles and Jonathan Turner.

“We’ve got some good competition on the offensive line,” Rollins said. “So it’s still a work in progress as far as who’s starting.”

When it comes to special teams, South should be about as good as anyone in the SPC.

Lambert can put his kickoffs in the end zone, although it would be nice if South kicked off more often.

Lambert only had 11 PATs last season and no field goals, but he’ll be a lot more of a factor if the offense moves the ball as expected.

Marshall Long is an experienced punter.

“Those two kids put in a lot of time in the offseason working together,” Rollins said. “Brennan has a really solid leg, a college leg. Marshall had his ups and downs, but we expect him to be a big plus this season. He really gets the ball in the air.”

Defensively, South doesn’t have to set the world on fire to be better, and with more help from the offense, the Raiders should post stronger defensive numbers.

Part of the struggle last year was losing the takeaway tussle down the stretch. South lost the turnover battle 23-10 during its last seven games.

There are two defensive anchors returning in Parham, All-SPC at end, and Burke Fulcher, who will be starting for the third season at inside linebacker and made all-county as a junior.

Karriker (5-10, 210) will be counted on at the all-important nose guard position and will be asked to tie up two blockers.

The starting defensive ends will be seniors Grex Urey and Parham, who is listed at 220 pounds.

Davin Wilhelm will be counted on for depth, along with Tiger Mysayakhom.

Fulcher and Brian Cagler, a tough, 220-pounder up from the jayvee team, will be the inside backers.

Noah Clearwater and Johnson are next on the depth chart.

Stanback will be expected to start at one outside linebacker.

“He’s really impressed us in the way he can cover the field,” Rollins said.

Rhyne and Trey Littlejohn probably will start at the corners, with Stowe, Helms, Tucker and Ryan Ashworth candidates to start at the safeties.

“I feel good about our kids,” Rollins summed up. “They’re stronger this year because they’ve been in the weight room steadily, and I like our chemistry. We had a rough season a year ago, but I know we’ll keep plugging.”

The biggest problem for South is the SPC. None of the eight teams in the league expect to be bad, while some of them — Concord, Carson, Central Cabarrus and West Rowan to name four — are expected to be stout.

There’s not much relief in the three non-conference games either. SR will be a big underdog against South Iredell and A.L. Brown, and Central Davidson spanked the Raiders soundly a year ago.

“We’re a small school now (under 1,000 students) and our team knows that and our school knows that,” Rollins said. “But we’re excited, and we believe we can do good things. As long as the kids believe, that’s the important thing.”