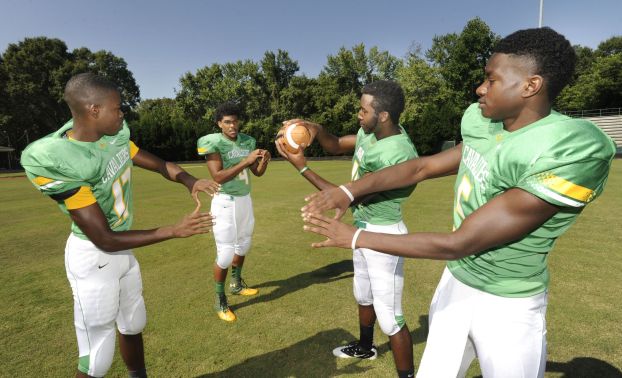 North could be even better

So what do you do for an encore after 13-1, 39.4 points per game and a football revival in Spencer.

Well, if you’re North coach Joe Nixon, you try to take the next step up the ladder.

But Nixon is a cautious, one-game-at-a-time type. He’s not talking about getting another shot at Shelby (the Golden Lions drilled North 45-21 in Spencer in the third round of the playoffs) and he’s definitely not talking about the possibility of the school’s first state championship.

All he will talk about is North having a chance to be very good.

It’s been a quiet, get-a-little-bit-better-each-day process for the Cavaliers that began shortly after the home loss to Shelby. All the Cavaliers look different. They’ve lived in the weight room. They’re bigger, they’re faster, they’re stronger, and they’re a year older.

“We’ve got 21 seniors,” Nixon said. “The majority of those guys have been with us since I came here before their sophomore year. They’ve watched some great leaders graduate, and now it’s their turn. There’s never been a great team that didn’t have great leaders. We have seniors who have the potential to be those great leaders, and we’re excited about that.”

North returns the three breathtaking guys from that record-setting offense.

Rowan County Offensive Player of the Year Jareke Chambers will be expected to repeat as the county’s most explosive running back. There’s no quarterback in the county that you’d trade Alexis Archie for. With his combination of size and speed, Sakil Harrison is the county’s most talented wideout.

Chambers (6-0, 180) is special, a Division I guy. He rushed for a school-record 2,018 yards and scored 31 TDs, including a school-record six in one night. He threw five touchdown passes, taking the snaps when Archie was out with an injury. He also caught two TD passes and ran back a kickoff for a TD.

“He’s a great player and he can play multiple positions,” Nixon said.

North’s school career rushing record has been held by Mark Sturgis since 1976, but Chambers is in position to break that mark on opening night. He only needs 72 yards.

While Chambers is the only insurance behind Archie at quarterback, there are other good ball-carrying options. Andra Cowan had 389 rushing yards in 2013, while Raekwon Wynruit had 207. Both found the end zone twice.

“We feel good about having so many experienced running backs,” Nixon said.

Archie (6-3, 215) is an exceptional pocket passer throwing for 1,457 yards and 16 TDs as a junior, but he also adds to North’s running game. It’s like trying to tackle a truck when he decides to take off, and he put the ball in the end zone with his legs nine times.

Harrison (6-2, 185) had 48 catches for 790 yards and eight TDs. It’s not like he threatened records, but he was consistent. He had at least one catch in every game and he had a six-catch, 110-yard effort against Shelby. He also possesses the strength to be a huge factor as a blocker on the edge.

Shareef Walker (8 catches, 113 yards) should be a much bigger factor as a pass-catcher this season.

North will employ four receivers in its base offense, so new faces will have a chance to emerge as targets for Archie. In that group are Tremon Massey, Trey Stoner, 6-3 basketball standout Josh Handy, Lee Sells, Alonzo Sirleaf, Charles Watkins and Ahmad Bates.

If there’s an area of concern for North, it’s replacing the entire offensive line, but that’s the specialty of Nixon, who was a standout offensive lineman at Catawba.

The big news is that Malik McGee, North’s all-conference nose guard is moving over to offense. McGee (6-2, 270) should be a force at right tackle and will protect the left-handed Archie’s blind side.

Jim Herndon, a defensive lineman a year ago, also is moving to help the offense. Herndon will be the right guard.

“Those two kids are unselfish, and they’re putting the team ahead of themselves,” Nixon said.

Brandon Castillo is counted on for depth on the OL.

North’s special teams are in good shape. Dylan Auten returns to handle punting duties. Brian Reyes is slated to handle kickoffs. Freshman Jacob Young is being counted on for PATS and field goals. Jake Pritchard is a dependable long snapper.

Defensively, North has big cleats to fill with linebacker Xavier Robinson, the Rowan County and Central Carolina Conference Player of the Year, and sacks leader Cecil McCauley moving on to the college ranks.

Robinson was a fierce leader, while McCauley was a tackle-for-loss waiting to happen.

North will again go with its 4-2-5 defensive alignment, which is usually a solid barrier against the growing wave of spread offenses in the prep ranks.

All-Rowan County Wesley Jefferies (6-5, 270) returns to anchor North’s defensive line at tackle. Defensive ends Shane Parker (6-2, 260) and Pritchard already have proven themselves. Parker made All-CCC and is strong enough to rotate inside. Steven Thurston (5-9, 250), a jayvee standout, takes over at nose guard.

“He looks good and fast,” Nixon said. “He’s got a chance to be special.”

Defensive-line depth will be provided by Terry Cathcart, Dennis Davis and Robert Gaither.

It’s going to be strange seeing the Cavaliers line up without Robinson at linebacker, but Omar Lipscomb and Dylan Riley are veterans with experience. Keance Miller and Javin Goodine will also be in the mix for playing time.

In the defensive backfield, North has a lot of experience, Kenyaun Coney likely will play the rover position after earning All-CCC honors. Tough-tackling Trae Clark is another returning starter, although he’ll be moving from safety to cornerback.

Jaleel Hitchens, a very quick guy who started several games in 2013, will man the other corner. Junior Xavier Partee is a returning starter at strong safety.

The free safety will be hoops hero Jalen Sanders (6-0, 205), who is returning to the football field after focusing on basketball as a junior. Sanders is very talented and will be an impact player.

That’s one heck of a DB group, and North has plenty of secondary depth with Paris Hillie, Jaylen Brown, Courtney Roseborough, Michael Streater and Damian Ellis.

The bottom line is that North, assuming the offensive line comes together, is going to be really good.

The schedule outside the CCC will test the Cavaliers. East Rowan and Carson are county rivals with a lot of good players returning. Davie, Statesville and Forest Hills have solid programs.

Inside the CCC where the Cavaliers rolled their five opponents by a combined 213-32 a year ago, the Cavaliers will be expected to repeat, but Nixon expects it to be tougher this time. Thomasville, Lexington and Salisbury, tradition-laden schools with excellent athletes, were all down last season at the same time, but all three expect to be better.

“We had a great team last year,” Nixon said. “I think we learned a lot, and now we’ve got a lot of guys who have played in the atmosphere of a third-round playoff game. That should help us.”

Until last season, North hadn’t won a playoff game since 2006 and hadn’t played in the third round since 2001.

The Cavaliers earned statewide respect in 2013 and enter this year ranked No. 4 in 2A.

Now, we’ll just have wait and see if they can take the next step.