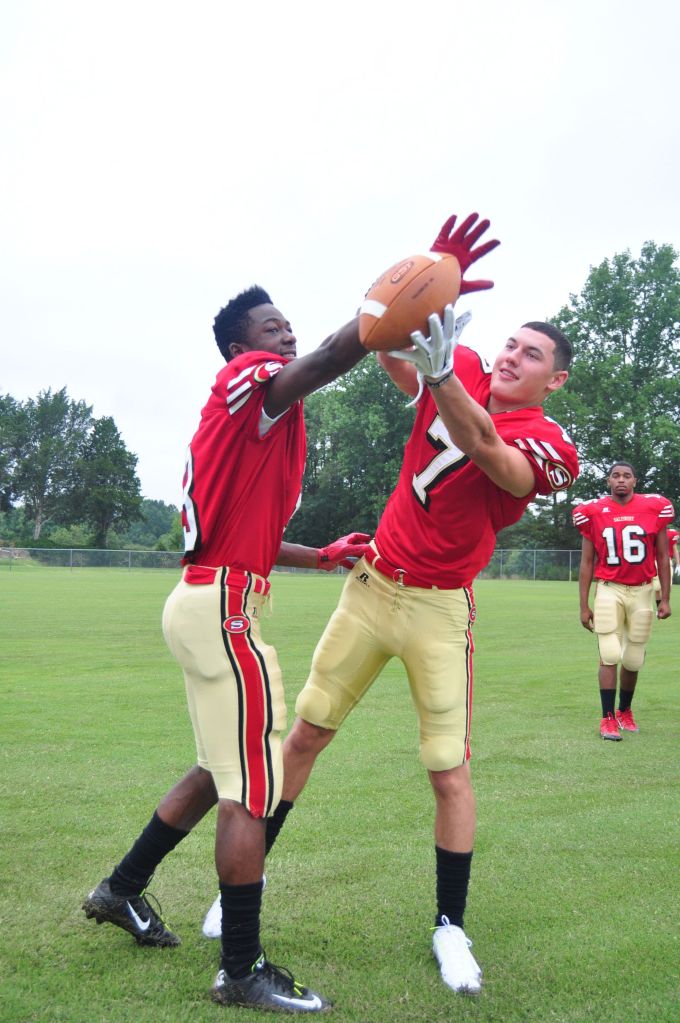 SALISBURY — Head coaching and Ryan Crowder had a rough first date. But the second-year coach has returned to the front door with flowers.

Salisbury’s football team averaged 10 wins a year from 2003 to 2013 under Joe Pinyan, now at Carson. Crowder was a part of that as the defensive coordinator for eight seasons and set the bar high with four-straight 10-win seasons.

But last year, the Hornets were shutout in four of their first six games. The 56-0 drubbing from South Iredell was the worst loss in school history and the low point of an 0-7 start that kept SHS out of the playoffs for the first time since 2001. The blanking to North Rowan in the season finale was a fitting end to a forgettable year.

Fortunately for SHS, high school goes by fast and 2013’s in the rearview mirror where it belongs. The same schedule is back with the entire non-conference slate consisting of tough 3A and 4A teams. What’s different now is there’s a new attitude that tackles their worthy opponents head on.

“You’ve got to play who’s next,” Crowder said. “It doesn’t matter who it is. You can’t really complain about it. You got to be ready to play whoever, whether they’re the best in the state or the worst in the state. There’s nothing we can do about it.”

The positive is that the Hornets were competitive once they hit Central Carolina Conference play and weren’t far away from being unbeaten in the league before the season finale at North Rowan. They won their conference opener against Lexington and their Senior Night game against West Davidson. SHS played inspired and held second-half leads against Thomasville and East Davidson, but came up short.

Even if SHS gets off to a another tough start, don’t count it out. They’re still a team making a name for themselves and finding their own identity.

“I don’t think we’ve cycled out,” Salisbury coach Ryan Crowder said. “I just think we had some bad luck with who we played. Last year, I don’t think we were anywhere near one of the bottom 2A teams in the state. You’re just one play or one snap away from being 4-1 in the conference. I don’t think we’re on a down cycle.”

Other than senior quarterback Riley Myers, there aren’t a ton of recognizable names on the roster. There’s no gaudy stats, but the Hornets are more concerned with learning to win again and regaining their stature as a respected 2A program. Crowder hopes the lessons of last year can pay off this year.

“We don’t have the John Knox or Romar Morris or Justin Ruffin,” Crowder said. “But we’re pretty solid B to B-plus across the board. We feel like we don’t have any holes.”

Willie Clark is the returning rusher with the most experience. Clark, a junior, had 117 yards rushing on 12 carries and one touchdown in the win against West Davidson last year. Clark is small but hard to bring down.

“Most of our guys are back,” Crowder said. “We have a lot of guys with varsity game experience, which is a good thing. Last year we didn’t have a lot of that. A lot of the guys starting were underclassmen and on the jayvee team the year before. We knew they were good players but because of our record, some people may not look at them as all that. The other positive is we’re more of a team as far as I don’t see a lot of weak links out there.”

Juniors Dae’Shaude White and Antwond Glenn played on varsity last year while Marcus Corry and Cameron Horne will be the other ballcarriers.

Myers partially tore a ligament in his elbow while pitching during baseball season and didn’t pitch during Legion ball. Crowder says his football throwing motion isn’t affected. The senior threw for 994 yards last year despite missing a game due to a concussion and is the emotional leader of the offense. He’s been in the program a while, quarterbacking the junior varsity squad for two seasons before last year.

“Riley has definitely taken plenty of snaps for us,” Crowder said. “He doesn’t feel pain out there right now and that’s a good thing.”

“All our quarterbacks are very intelligent kids,” Crowder said. “They understand the concept of the play and why we’re doing what we’re doing.”

Ryan Jones is the leading returning receiver, and Damann Milsaps is a dependable target at tight end. 6-2 Will Steinman and Kyaun Rice will play TE too and Malik Ford will see time there as well.

“I don’t wanna say we’re just gonna run it or just gonna throw it,” Crowder said. “We’re gonna mix in whatever it takes to move the ball.”

Desmond Millsaps and Cameron McLendon (6-3, 240) are returnees on the defensive line. Spencer Bowler is a sophomore who’s played well in practice , while junior Quandaus Gaither will provide depth. Darius Jackson is a returning starter at Hornet and is one of the main cogs of the unit.

County Athlete of the Year Clint Comadoll is being replaced at linebacker by some talented upperclassmen. Regional champion wrestler J.C. Burton and All-County basketball player D.J. Alexander are a couple. Jordan Oglesby is moving from Hornet and junior Eric Gibson could see time. Sophomore Tywun Rivens could be eight-quartered.

“We’ve always tried to pride ourselves on being able to adjust to offenses and create confusion,” Crowder said. “We’re a three-man front but we line up in four-man fronts and some even and odd fronts. A lot of the defense we run is very interchangeable and you can get a lot of different looks out of it.”

Jaylen McDowell and Murray are safeties while Dante Gaston and Shaquez Strickland bolster the cornerback spot. Matt Portscheller and Jernard Allison are depth players in the secondary.

Stephen Mazur is back for his third year carrying the kicking duties, and Crowder says Steinman will handle punts. Mazur kicked a game-winning field goal in the 2012 state playoffs at High Point Andrews.

Salisbury plays at Carson to start the year as Crowder faces his mentor in Pinyan.

The home opener is against East Rowan with dates at West Rowan and Lake Norman to follow.

The second home game pairs the Hornets up with 2012 state champ South Iredell.

A few new coaches are on staff.

Greg Derrick, who played at N.C. State and briefly with the New York Giants, is an offensive line coach. J.J. Gwyn, who played at SHS in the 2000s, is a new defensive line coach and former Catawba wideout Terrance King will help the receivers. Familiar faces like Scott Eagle, Darius Robinson and Ryan Ochier are back to assist as well.