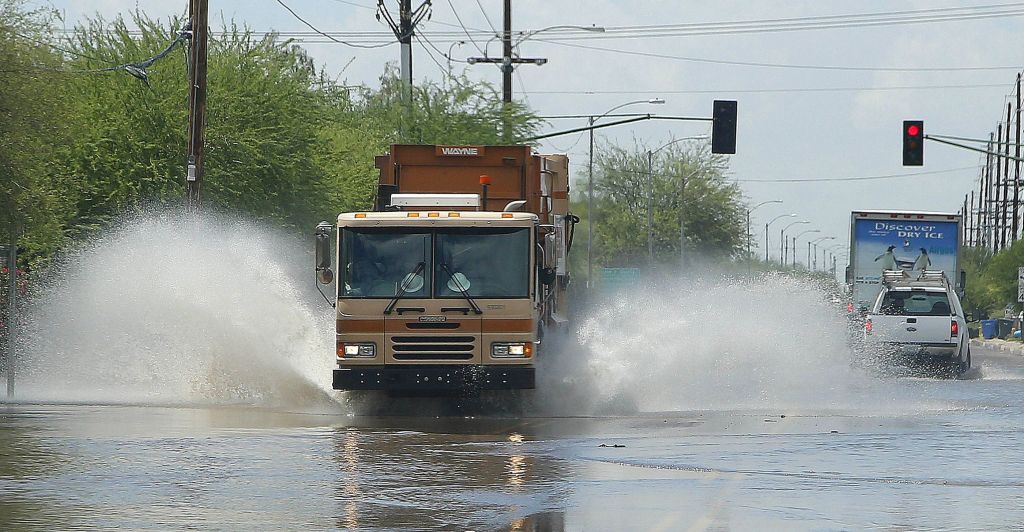 PHOENIX (AP) — Heavy monsoon season rains that swept across Arizona on Tuesday led to dramatic rescues, road closures and flight delays as a series of fast-moving storms pummeled the state.
A helicopter crew rescued two women and three dogs from a home surrounded by swift-moving waters in a town about 30 miles north of Phoenix, while elsewhere a small trailer park was evacuated, a school was flooded and first-responders pulled motorists from partially-submerged vehicles.
The National Weather Service issued a flash flood warning for much of the metro area and north of the city where up to 8 inches of rain fell by midday in some of the mountainous regions along Interstate-17, the main north-south freeway in Arizona.
Dramatic aerial television footage showed a river of muddy water rushing down I-17 about 25 miles north of Phoenix as motorists changed lanes to avoid the deluge. Other footage showed authorities pulling an elderly woman from a van stuck in rushing floodwaters, scenes repeated across the region throughout the day as motorists became trapped while driving through typically dry desert washes.
Gov. Jan Brewer said her office was monitoring the effects of the storm and will take additional action if needed. She said she had been glued to the TV all day watching the rescues.
“It looked absolutely devastating,” Brewer said. “For the last 10, 15 years, we’ve never seen anything the likes of this.”
Officials said nearly 5 inches of rain fell around the town of New River, where a helicopter dropped two rescuers onto the roof of a home after one had been waving a white piece of fabric from a window to draw attention. The rescuers later walked the women and dogs to safety as the water receded.
That’s more rain than that area saw during all of last summer’s monsoon season, said meteorologist Gary Woodall of the National Weather Service.
A roughly 15-mile stretch of northbound I-17 was reopened later Tuesday after authorities were forced to reroute vehicles for several hours into the southbound lanes sending them back to Phoenix because of floodwaters.
“It looks like the heavy rain is pulling out to the east and northeast out of that area,” Woodall said Tuesday afternoon. “But with all the rain that fell this morning, we’re going to see continued flooding, continued runoff probably into the early evening.”
Kathy Mascaro said her typical 15-minute commute from home to work in the Phoenix area more than doubled because of the traffic nightmares caused by the flooding.
“It’s crazy. You’d think, how could the desert flood, but it really does,” Mascaro said. “I’ve never seen it this bad. I’ve been here over 20 years and it has never flooded this bad.”
The Cox Cactus Farm in Phoenix was inundated by a nearby creek as rushing waters sent workers scrambling to save their plants.
“Everything just washed away,” employee Mitch Bell said.
The desert around Phoenix sees very little rain most of the year, so when storms roll through with such intensity as they did Tuesday, the water has nowhere to go.
“With so much rain falling so quickly, the water doesn’t have a chance to soak into the hard-packed rocky soil,” Woodall said.
Arizona’s monsoon season runs roughly from June to September, when powerful storms form with heavy rain and whipping winds. It’s a phenomenon that occurs each summer when the winds shift, bringing moisture north from the Pacific Ocean and Gulf of Mexico to produce radical and unpredictable changes in the weather.
Sporadic storms were expected to continue across the Phoenix area for the next few days, according to the weather service.
On Tuesday morning, rocks washed down a hillside onto I-17 about 60 miles north of Phoenix, causing several vehicle collisions, but no deaths or major injuries have been reported, said Bart Graves, a spokesman for the Arizona Department of Public Safety.
Meanwhile, residents of a small trailer park in Black Canyon City along a river about 40 miles north of Phoenix were evacuated late Tuesday morning, according to the Yavapai County Sheriff’s Office.
There was minimal flooding damage to the park, but authorities wanted to get residents to a safe location because water had damaged roads in the vicinity, sheriff’s spokesman Dwight D’Evelyn said.
Firefighters from Phoenix and the Daisy Mountain Fire District on Phoenix’s northern outskirts rescued at least six motorists in separate incidents, Phoenix Fire Capt. Benjamin Santillan said.
“We’ve got units jumping from one car to the next to the next,” Santillan said, adding that there have been no reports of injuries.
Flights from Phoenix Sky Harbor International Airport were delayed up to two hours while some inbound planes were diverted to other airports until the storms passed.