Cougars charging into a new season 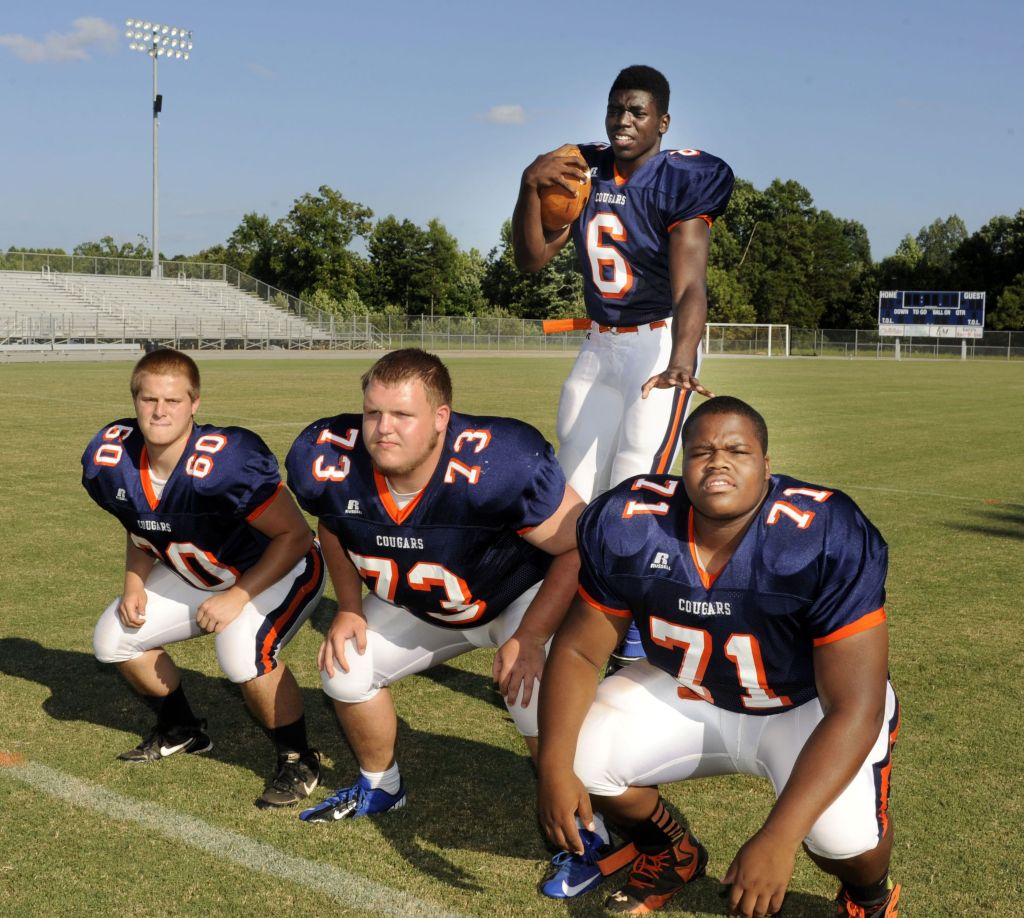 CHINA GROVE — Life on the road had its ups and downs for the Carson football team last year.

Sure, they had a winning season for the first time since 2010,

The Cougars have seven home games this season. Their first three games are at home against Salisbury, North Rowan and South Piedmont Conference foe Central Cabarrus.

“The good thing about last year is we didn’t have to paint the field very much,” Pinyan said. “It’ll help our athletic director balance the budget a little bit.”

Carson beat West Rowan for the first time last season as part of a four-game winning streak that had the Cougars 5-2 at one point. They finished 7-5 after falling to Gastonia Forestview in the first round of the state 3A playoffs.

We’ll spare the suspense. Carson’s going to run the ball a lot. The return of some pivotal skill players and depth on the defense should keep the Cougars in contention in most games.

A deep collection of halfbacks predicates that. Pinyan’s teams usually are deep in the backfield and this year is no exception. Their bellcow is back in four-year varsity player Brandon Sloop. Sloop’s is at the forefront of the mix with 3,463 career yards, seventh in County history. Good health and similar production could shoot Sloop (5-10, 190 pounds) up into the top five.

“You can say a lot of great things about him,” Pinyan said.

Sloop is coming off of some leg complications, but Pinyan says he’ll be ready to go for the opener.

“There’s no secret if we need 3 yards,” Pinyan starts. “There’s a good chance that the ball’s going to be under Sloop’s arms.”

Sloop’s also a factor at the state level in wrestling and a competent addition to the baseball team,

“He gets better as the season goes on,” Pinyan said. “I think it’s because he plays so many different things and his body changes for wrestling and then for baseball. He’s still a great running back.”

Senior Darren Isom will get carries after running for 580 yards in 2013. Isom caught a 66-yard, fourth-quarter touchdown pass in a 10-3 win at Mt. Pleasant.

“Darren has the ability to be a gamebreaker,” Pinyan said. “He’s gotta step up and be the guy.”

The wild card at HB is Marquez McCain, who’s back after a two-year absence. McCain, a senior, was an All-Rowan County basketball player last year and carries good speed and agility.

“Marquez is one of the better athletes in the school,” Pinyan said.

Quarterback Andy Lear guided the jayvee squad to a 9-1 record with the only loss coming to North Rowan in the finale. Lear, a junior, was eight-quartered last year and played on varsity in mop-up time.

“He gives us more weapons,” Pinyan said. “His arm may not be the same as [Austin] McNeill, but he does a good job of running the offense and making good decisions.”

Josh Copeland is the backup QB and a fellow junior.

At wide receiver, Brandon Huneycutt can be a viable option. The 6-1, 170-pound junior caught 13 passes last year, six for touchdowns, and has an existing connection with Lear.

“He’s got a set of hands that are amazing,” Pinyan said. “If he played in some of these other offenses that throw the ball a lot, he’d break every county receiving record there is. He’s not slow either. He’s pretty quick.”

Logan Parker, Justin Copeland, Sterling Dial and Jacob Raper are pushing for the other receiver spot.

Senior Cody Brown (6-1, 270) is the projected center and the leader of the offensive line. 6-2, 300-pound Tyler Mason is a big deal at guard as is 6-3, 210-pound Chris Martin at tackle. Josh Hawk could have a breakout season at tackle. Left guard is junior Ethan Collins (6-1, 240). Mason Keller, Christian McCora and Ryan Harwell will see time in the trenches as well.

“We have an abundance of what we think can be good linemen,” Pinyan said. “We feel like we’re two-deep across the line. That gives us a chance to be pretty good. A lot of those guys are seniors, but our young guys may push through there and take their place if they’re not careful.”

On the defensive line, state champion wrestler and senior Alex Lyles (6-4, 260) will be the primary hellraiser at tackle. He’s the first guy Pinyan mentions when talking defense.

Austin Russ and Tanner Christie are well over 200 pounds and give the Cougars size at the other tackle position.

Connor Wilson and Carlos Sanchez are battling for nose guard while Kymeric Alexander will provide depth.

Steve Hannon and Adam Funderburke will also put their hands down on the d-line.

“These guys all have pretty good size, so we’re solid up front,” Pinyan said. “This enabled us to take a guy like Ryan Bearden and put him where we need him.”

Senior Anthony McCurry bolsters the linebackers at 5-11, 195 pounds. Pinyan thinks he’s one of the better defensive players in the county.

“He has a nose to play the game,” Pinyan said. “He racks up stat after stat and doesn’t get enough credit for the player he is.”

Bearden (6-3, 220) is being moved back to LB and is right there with McCurry as far as impact. Jacob McCurry, Keshori Johnson and Luke Seropian also hope to be difference-makers.

At Spur, Carson’s having to replace Williams, Max Lear and Will Zentmeyer.

Potenial spur Andrew Germann, a sophomore transfer from First Assembly in Concord, has gathered the respect of the coaches. Alex Deal, Garrett Pell, Matt Efird, Braxton Peele and Kyle Roe are candidates for the outside linebacker/defensive end/safety hybrid.

Returnees in the secondary include Austin Lear, who’s back at safety, and cornerback Jonathan Rucker. Armani Hogue, Aldyn Blackwelder and senior Levi Strickland give depth at corner and safety.

Heath Mitchem returns to punt and Cole Howard is the leading candidate to kick.

“A lot of them have a year under their belt now,” Pinyan said. “We were fortunate to have some positives in that first year. Whether we can continue that is the challenge. The foundation is set, but you can’t build a house with just a foundation.”

Back-to-back state finalist Concord is the favorite in the SPC, but the league is competitive enough that Carson could pose a threat.

“[Concord coach] Glen Padgett told me he doesn’t know how anybody can get out of this conference undefeated this year,” Pinyan said. “I think our conference is that balanced. I know there’s some tough leagues throughout the state, but there’s no gimmes out there.”