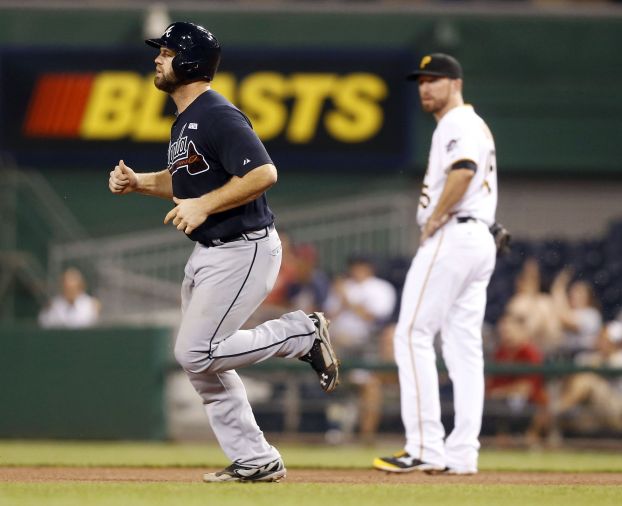 PITTSBURGH (AP) — Fredi Gonzalez has seen this before. Every summer it seems.
There will come a time during the season when something clicks in Justin Upton and all the rest of the Atlanta Braves have to do is hop on and enjoy the ride.
Like now, for example.
Upton went 2 for 4 with five RBI in Atlanta’s 11-3 thrashing over reeling Pittsburgh on Tuesday night. The Braves have won five straight and are 7-3 during Upton’s current 10-game hitting streak.
“He gets hot and he can carry us,” Gonzalez said. “He’s done that a few months so it’s nice to have that big bat right behind (Freddie) Freeman, who is starting to roll the pole a little bit also.”
Upton’s 24th homer — a three-run shot off Francisco Liriano (3-10) in the third — broke things open early. He added a two-run single off reliever Brandon Cumpton in the fifth as the Braves extended Pittsburgh’s losing streak to a season-high seven games.
Jason Heyward went 2 for 5 with three RBI for the Braves while Evan Gattis hit his 19th homer on a tape-measure shot that landed halfway up the rotunda behind left field.
“That was a joke,” Upton said of Gattis’ shot.
Aaron Harang (10-7) struck out four without a walk in 8 1-3 innings, his only misstep coming in the ninth when he couldn’t quite nail down his first complete game in 14 months.
“I was locating, getting ahead early, not deep into counts a lot,” Harang said. “They were being really aggressive and swinging at pitches out of the zone. Guys were there to make plays for them.”
Harang even added his first RBI in two seasons, a single up the middle in the second that put the Braves up 1-0. Upton did most of the rest as the Braves ruined Andrew McCutchen’s return to the lineup for Pittsburgh.
McCutchen went 0 for 4 in his first game back after missing two weeks with fractured cartilage in his ribs. The reigning National League MVP left the game after grounding into a double play in the bottom of the eighth. He reported no discomfort but allowed it may take a bit for his timing to come back.
“This is definitely something I’m trying to do, get back in the rhythm of things, get back in the swing of things,” he said. “That will come sooner rather than later.”
Travis Snider, Starling Marte and Russell Martin had two hits apiece for the Pirates, whose current losing streak is their longest since dropping seven straight Sept. 7-14, 2012.
Liriano’s real problems began in the third. He allowed singles by Phil Gosselin and Freddie Freeman to start the inning. Upton sent a lined shot over the wall in left to make it 4-0 and the Braves kept piling on.
Liriano gave up nine runs, seven earned, in four-plus innings. He walked three and struck out four while his ERA rose from 3.78 to 4.18.
“One of those nights anything you throw is gonna get hit,” Liriano said. “They’ve been pretty hot last couple games. I’ve got to put it behind me, got to move forward.”
TRAINER’S ROOM
Braves: After failing to retire a single batter against Charlotte in an International League game on Wednesday night, rehabbing right-handed reliever Shae Simmons will make a third appearance for Triple-A Gwinnett on Wednesday. Simmons, who has been on the disabled list since July 27 with a strained right shoulder, pitched one scoreless inning in his first outing last Saturday against Norfolk.
Pirates: Shortstop Clint Barmes was given a night off in Triple-A Indianapolis as he recovers from a strained left groin that has sidelined him since late June. The 35-year-old Barmes went 0 for 3 in his first game with the Indians on Monday night.
UP NEXT
Braves: Alex Wood (9-9, 3.07 ERA) goes for his third straight victory on Wednesday for Atlanta. The 23-year-old has a 1.45 ERA over his last six starts but remains at .500 on the season because he receives the second-lowest run support in the majors.
Pirates: Ace-in-training Gerrit Cole (7-4, 3.78 ERA) returns from his second stint on the disabled list on Wednesday. Cole hasn’t pitched in the majors since being sidelined by right lat soreness on July 9. He pitches seven scoreless innings for Triple-A Indianapolis last Friday. Cole is 4-1 in his last five decisions. He will be making his first career start against Atlanta.