A lesson in mud boggin’ 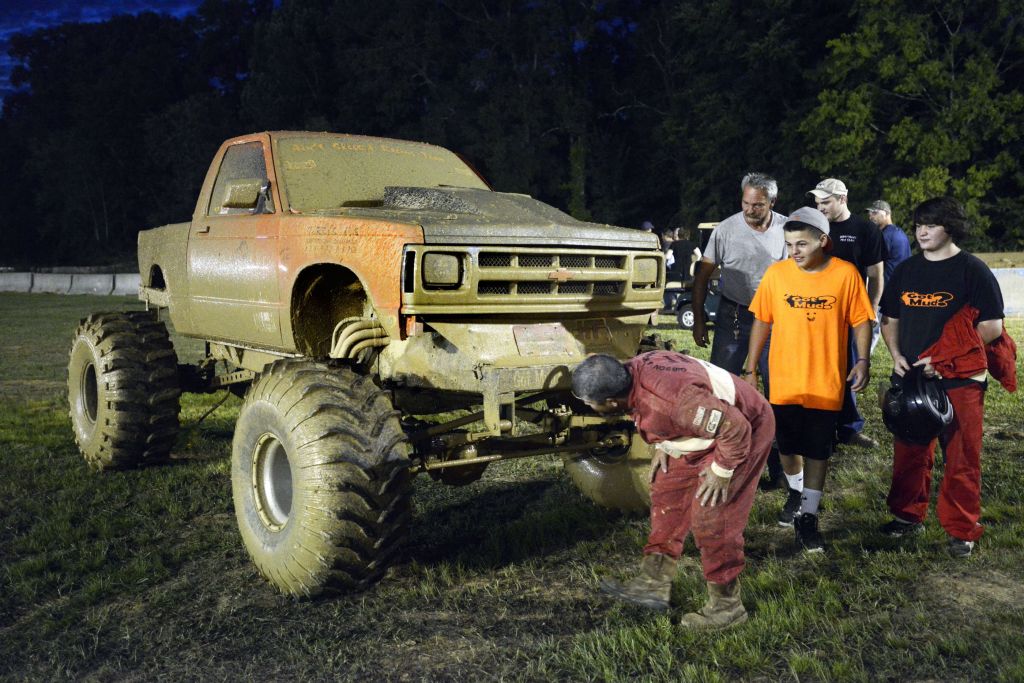 The email from the Salisbury Post Editor Elizabeth Cook came to me simply asking, “Are you available to cover the mud bogging at the fairgrounds on Friday night at 7:30 p.m.?
Mud bogging? My mind was clicking away, trying to remember what mud bogging is. My mind came up blank, so I went to “my back-up mind,” the Internet. Sure enough, there were many YouTube videos of trucks splashing through tons of mud.
“I can do it,” was my email response. It will make great photos.
At the Rowan County Fairgrounds, I met Peewee Gibson from Lexington who is a veteran of mud bogging. He’s been racing since 2007 and was last year’s champion in the Open Renegade Class. He was eager to show me his truck, a 1985 Chevrolet S-10 pickup called the “Bounty Hunter.” It doesn’t look at all like the little red 1996 S-10 truck that I have that once was my dad’s.
By the way, Peewee is a good name for this driver, since he is only about 5 feet, 2 inches tall. He custom built his truck. The radiator has been moved from the front to behind the cab to keep out the mud. The windshield has a neat hole cut out in the shape of the Chevy emblem so that he can see out once the front is covered in mud. The bed of the truck is gone and all the door panels and extras inside the truck are gone to make the Bounty Hunter lighter in weight. It has a rollbar in case it should turn over, and Peewee always wears a racing helmet and straps into the seat with a seat belt.
I don’t know much about trucks and horsepower and motors or wheel sizes, but I heard all kinds of conversation around me on the infield with the drivers. I thought I was in a foreign country. They were speaking English, well, Southern English, for the most part. Sometimes, it was Southern English with a lot of spicy words. I could hear the words, but I didn’t know the meaning.
Then the racing started. The announcer, Johnny Love, called for Peewee to take the Bounty Hunter to the starting line. The big, watery mud pit was a foot and a half deep with a big hump about halfway down the racing lagoon.
There was the smell of the freshly dug earth of the lagoon, the biting of bugs around my ankles and the roar of motors popping and sputtering while warming up.
The spectators in the concrete bleachers edged forward. The fans sitting on the backs of their big-wheeled trucks in folding lawn chairs and the ladies on top of the hauler trailers were all ready to see Peewee take that little Chevy S-10 truck into sure disaster in the mud pit.
Peewee tightened his seat belt, adjusted his helmet, revved his engine and drove that red truck into the muddy water. It never slowed, but speeded up like a dog eager to run wild. Mud flew 20 feet into the air in all directions, making artistic patterns in the air. That little truck disappeared in the mud, but I could still hear the motor roaring and popping. Then all of a sudden, the little truck with Peewee as the pilot, leaped out of the water like a porpoise coming up for air. It was flying right at me at the end of the lagoon.
I thought, “Oh no, I’ve had it. I’m going to be hit and covered in mud by a S-10 Chevy running for daylight.”
Relieved, I was safe. The Bounty Hunter calmed down as Peewee pulled on the reins and drove past me into the infield. It was dripping muddy water and the red truck’s paint was now somewhat orange covered in the white mud. The crowd cheered for Peewee.
I had my photos and that was mud bogging.
The same sequence was repeated for over two hours with different trucks and drivers in Rowan County’s first mud bogging event. It looks like a success for the new local sport.
Photojournalist Wayne Hinshaw lives in Salisbury. The mud bogging competition was part of the Rowan County Fair Association’s first Fin, Feathers and Fur Outdoor Expo last weekend.

Praise in the Park