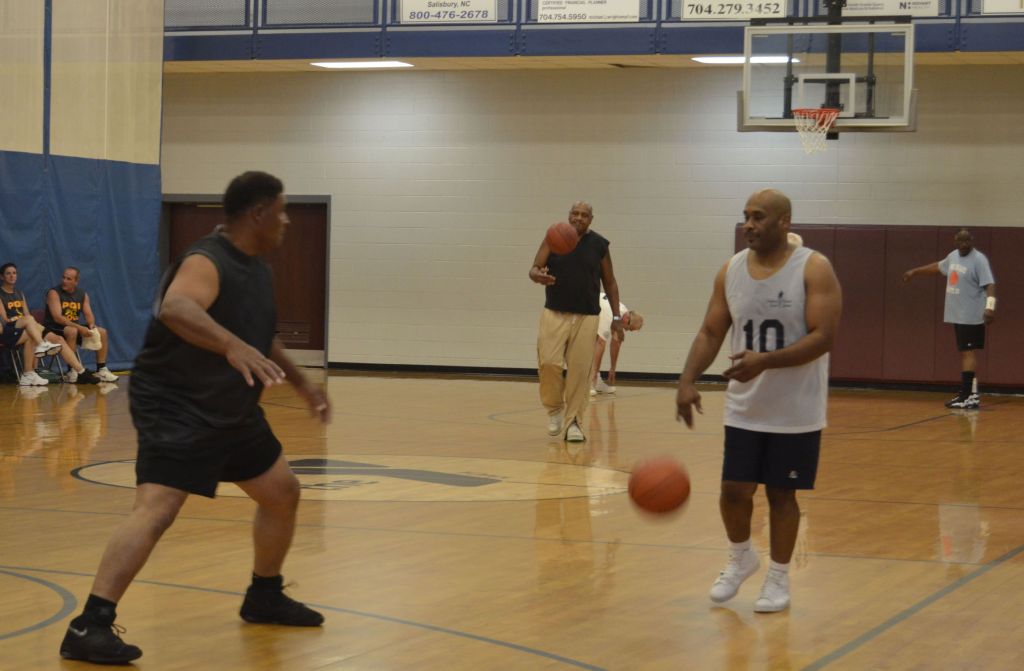 ROCKWELL — Curtis Hill has actually been looking forward to playing in the Rowan Senior Games basketball tournament since his 20s. He’d always been a basketball player but through the years had gotten out of the game.
Now in his late 50s, the Salisbury resident is part of the men’s 55-59 age group.
“I always knew I’d be an old guy,” he said with a chuckle.
Hill and more than 130 players from North and South Carolina as well as Tennessee gathered Saturday at the Saleeby YMCA in Rockwell for the Salisbury/Rowan Senior Games basketball tournament. The tournament determines who will go on to play in the North Carolina Senior Games State Finals at East Carolina University in October. This is the fourth year for the annual tournament.
Hill was recruited while walking through Walmart and talked to a guy “who knew me when I was younger.”
He told the friend he’d love to play basketball, but there was no one to play against. Hill still loved the game but “didn’t think there was anybody like me that still wanted to play.”
He now plays on the basketball team as well participating in basketball shoot and table tennis, in which he won gold medals in a competition earlier this year. He played with the “Rowan 50 Plus” team.
Hill said longtime Senior Games participant and medalist Hazel Trexler-Campbell is his inspiration.
“She’s amazing,” Hill said.
The 91-year-old Trexler-Campbell has competed in the Senior Games for 30 years.
Hill said he wishes more Rowan County seniors would get involved in the events.
John Peterson of Salisbury has helped out in the past with the tournament but decided to play in it this year.
“It’s a lot of fun. You get to meet different guys,” Peterson said.
He’s part of the Rowan Ringers basketball team and also plays softball.
“I used to play a long time ago. It’s fun getting to be out on the court,” he said. “I’m glad I’m in good enough shape to play.”
He also wishes there were more participants on the softball team.
Eddie Watts was recruited by Senior Games Coordinator Phyllis Loflin-Kluttz and her husband one day while walking in the mall.
“It’s been great. I got the chance to meet a lot of people,” he said.
He participates in corn hole, softball, horse shoe, basketball tournaments and basketball shoot.
This is the Woodleaf resident’s first year participating in the Senior Games.
He recently retired and was looking for something to do with his time, Watts said.
Jim Epperson recalls a time when there were no team sports for seniors and he played basketball whereever he could.
He said the program is a great way for the men and women to stay in shape and provides camaraderie.
Epperson said it’s great to “still be able to gather to do something we all enjoy.”
He said Saturday’s tournament gives the players something to look forward to and provides a goal of reaching the state finals later in the year. Epperson is part of the “Rowan Triple Threats” the men’s 75+ team.
Garth Johnson and Wallace Lewis have been part of the annual tournament since the beginning.
“We love the atmosphere, and Phyllis has been good from the inception of the tournament,” Lewis said.
Johnson said they really enjoy the tournament and the “great competition.”
The men are part of team Wazee, based in Wendell, and finished No. 2 in the country.
The camaraderie is what the men like about the tournament, Lewis said. “All the credit goes to Phyllis.”
James Daves traveled from Columbia, S.C., to play with his team, the “High Country Mountaineers.” He’s traveled to several states — from California and Arizona to Florida and Louisiana — to play with the team in tournaments.
“It’s good exercise. You make some friends and the competition,” Daves said of why he likes the tournaments.
He loves to play basketball and says it makes him want to play other sports and get involved in other activities. He also competes in track and field as well as tennis.
He’ll try a 5K in Minneapolis, Daves said.
Daves is very active and regularly runs laps on the road, runs up stadium steps and does sit-ups. He’s always been in shape, Daves said.
Kathy Campbell is the team captain of one of the few women’s teams in the state. Rowan County does not have a women’s basketball team.
She and the other members of the Red Foxes are part of a four-county team — Catawba, Alexander, Burke and Caldwell.
“I’m glad we have the opportunity to play in competitive play,” she said.
Teammate Janet Stinson not long ago underwent chemotherapy after she was diagnosed with ovarian cancer.
“We used to play and love the opportunity to live life to the fullest,” Stinson said.
These Rowan County teams won the following medals:
Silver — “Rowan Triple Threats,” Men’s 75 + division
Silver — “Rowan 50 Plus,” Men’s 50 + division
Bronze — “Never Too Late,” Men’s 60 + division
Contact reporter Shavonne Potts at 704-797-4253.