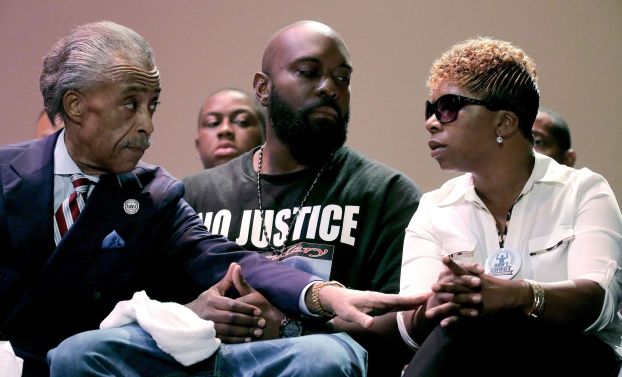 FERGUSON, Mo. (AP) — Attorney General Eric Holder on Sunday ordered a federal medical examiner to perform another autopsy on a black Missouri teenager whose fatal shooting by a white police officer has spurred a week of rancorous and sometimes-violent protests in suburban St. Louis.
The “extraordinary circumstances” surrounding the death of 18-year-old Michael Brown and a request by Brown’s family members prompted the order, Department of Justice spokesman Brian Fallon said in a statement.
“This independent examination will take place as soon as possible,” Fallon said. “Even after it is complete, Justice Department officials still plan to take the state-performed autopsy into account in the course of their investigation.”
The Justice Department already had deepened its civil rights investigation into the shooting. Officials said a day earlier that 40 FBI agents were going door-to-door gathering information in the Ferguson, Missouri, neighborhood where Brown, who was unarmed, was shot to death Aug. 9 in the street.
David Weinstein, a former federal prosecutor who supervised the criminal civil rights section of Miami’s U.S. Attorney’s office, said a federally conducted autopsy “more closely focused on entry point of projectiles, defensive wounds and bruises” might help that investigation, and that the move is “not that unusual.”
He also said federal authorities also want to calm any public fears that no action will be taken on the case.
President Barack Obama, who has been getting regular updates on the situation in Ferguson while on vacation, was to be briefed by Holder upon returning Monday to the White House.
The Justice Department’s announcement followed the first night of a state-imposed curfew in Ferguson, which ended with tear gas and seven arrests after police dressed in riot gear used armored vehicles to disperse defiant protesters.
Missouri State Highway Patrol Capt. Ron Johnson said protesters were not the reason for the escalated police reaction early Sunday after the midnight curfew took effect. He cited a report of people who had broken into a barbecue restaurant and taken to the roof, and a man who flashed a handgun in the street as armored vehicles approached the crowd of protesters.
At a Sunday afternoon rally, Johnson said he had met members of Brown’s family and the experience “brought tears to my eyes and shame to my heart.”
“When this is over,” he told the crowd, “I’m going to go in my son’s room. My black son, who wears his pants sagging, who wears his hat cocked to the side, got tattoos on his arms, but that’s my baby.”
Johnson added: “We all need to thank the Browns for Michael. Because Michael’s going to make it better for our sons to be better black men.”
The Rev. Al Sharpton told the rally Brown’s death was a “defining moment for this country.”
Sharpton said he wants Congress to stop programs that provide military-style weaponry to police departments. He said he expects police to “smear” the slain teenager, his family and his attorneys.
He also condemned the recent spate of violence and looting in Ferguson.
As the sun began to set Sunday, the protests had a party-like atmosphere, with crowds lining the street in front of buildings that had been looted. Some people were barbequing outside the burned-out QuikTrip convenience store that was destroyed earlier in the week.
The protests have been going on since Brown’s death heightened racial tensions between the predominantly black community and mostly white Ferguson Police Department, leading to several run-ins between police and protesters and prompting Missouri’s governor to put the state highway patrol in charge of security.
Ferguson Police waited six days to publicly reveal the name of the officer and documents alleging Brown robbed a convenience store before he was killed. Police Chief Thomas Jackson said the officer did not know Brown was a suspect when he encountered him walking in the street with a friend.
Gov. Jay Nixon, who imposed the curfew after declaring a state of emergency, said Sunday on ABC’s “This Week” that he was not aware the police were going to release surveillance video from the store where Brown is alleged to have stolen a $49 box of cigars.
“It’s appeared to cast aspersions on a young man that was gunned down in the street. It made emotions raw,” Nixon said.
Police have said little about the encounter between Brown and the officer, except to say that it involved a scuffle in which the officer was injured and Brown was shot. Witnesses say the teenager had his hands in the air as the officer fired multiple rounds.
“When you’re exhausted, when you’re out of resources, when you’re out of ammunition, you surrender,” Brown’s uncle, pastor Charles Ewing, told worshippers during a Sunday sermon at Jennings Mason Temple in Ferguson. “He surrendered, and yet he died.”
The officer who shot Brown was identified as Darren Wilson, a six-year police veteran who had no previous complaints against him. Wilson has been on paid administrative leave since the shooting and the department has refused to say anything about his whereabouts. Associated Press reporters have been unable to contact him at any addresses or phone numbers listed under that name in the St. Louis area.

For thousands of women in North Carolina, the hot color this season is camo. Over the past seven years the... read more