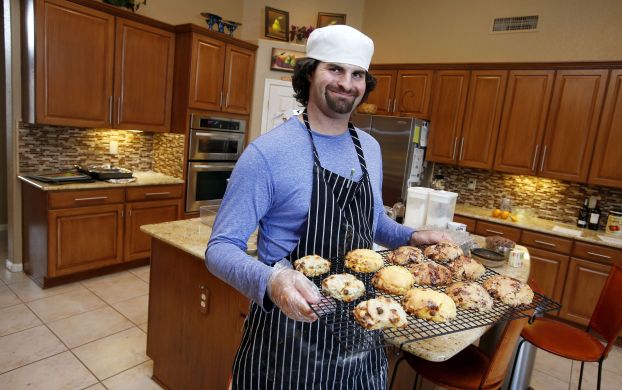 Owning a business the answer for some with autism

NEW YORK (AP) — When Matt Cottle asked his boss to let him work in the supermarket’s bakery, she told him he’d never do anything more than collect grocery carts.
After six years of bagging groceries and pushing carts, Cottle wanted more. He had already learned how to do some baking.
Cottle is autistic. And today he’s an entrepreneur, the owner of Stuttering King Bakery, turning out batches of cookies, brownies and scones for cafes and businesses and groups that need catering.
“I was like, OK, I am destined to do something greater than that,” Cottle says in the kitchen of his family’s Arizona home, where he spends hours each day filling orders. He generates $1,200 monthly. He named the business for Britain’s King George VI, whose struggles to speak were the subject of the film “The King’s Speech.”
Cottle is one of a few known small business owners with autism, a brain disorder that affects a person’s ability to comprehend, communicate and interact socially. There are varying degrees of autism, but even autistic people with the greatest capabilities can find it impossible to get a job because they take longer to read or process information, or because they struggle to hold conversations. One in 68 people has some form of autism, according to government figures.
There is a growing movement to help autistic adults find jobs, but for Cottle and his family, the answer was a business of his own.
Cottle had taken training to do search and rescue operations. And he tried working in a bakery. Both times, he encountered people who didn’t understand him, and who ended up yelling at and insulting him, his mother, Peg Cottle, says. He wanted to enroll in a culinary school, but an administrator gently told him and his parents it wouldn’t work out. Four years ago, the Southwest Autism Research & Resource Center, or SARRC, connected Cottle with a pastry chef who mentored him. In August 2012, he unexpectedly got an order from a cafe operated by Phoenix-based SARRC. At that point, Cottle told his parents he was starting his own baking business.
“I’m happy as an angel,” he says.
Many autistic people can run businesses if they’re given the chance to discover something they like and develop skills around their interests, says Temple Grandin, one of the best-known advocates for people with autism.
“If you get them exposed to something, they can get a career,” says Grandin, author of “The Autistic Brain.”
Grandin, who has autism, didn’t speak until she was 4 years old. In her teens, she was bullied by classmates who made fun of the way she spoke — she repeated the same phrases over and over.
“They called me ‘tape recorder.”’ she says.
In her teens, Grandin was exposed to horses at a boarding school and cattle on her aunt’s ranch, and she began working with farm animals. She eventually created a business designing equipment for handling livestock.
People with the most severe autism aren’t able to work because their disabilities limit their ability to learn. But it’s only in the last two decades that society has come to realize that many people with disabilities including autism can work, says Paul Pizzutello, principal of Reach Academy, a school whose students include some who are autistic.
“With many people with autism, it’s not their intellect that a problem, it’s their ability to engage with their environment and manage social contacts,” he says.
When Cottle’s parents tried to help him get a job, they explained to prospective bosses that because he is autistic, he needs more time to understand instructions. The companies either didn’t want to take the time to learn how to work with him or they assumed Cottle might do or say inappropriate things. He grew frustrated by the unsuccessful attempts to find work.
“He was at a brick wall before he started his bakery,” Peg Cottle says.
Soon after starting, Cottle and his mother attended entrepreneurship training classes offered by Seed Spot, an organization that helps socially responsible businesses.
“He’s legitimate. The product he produces is the real deal. His disability doesn’t even come into play as far as I’m concerned,” says Chris Norcross, general manager of building company and Stuttering King customer Mortenson Construction. He orders as many as 300 cookies at a time.
Autistic owners don’t run their companies by themselves. Support from family members to interact with the public, take orders and handle marketing and billing is vital.
Peg Cottle takes orders and does marketing for Stuttering King Bakery. Cottle is able to speak, but talking on the phone can be difficult. If a customer gets chatty and strays from the basics of placing an order, it can be hard for Cottle to understand.
Vinnie Ireland has little language ability but owns landscaping company Weed Whacking Weasel in North Carolina. The autistic man does leaf-blowing, hedge-trimming, mulching and other tasks, and works with an assistant trained to help the autistic. His mother, Lori Ireland, handles marketing and billing. The business has between six and 10 residential and commercial customers, depending on the time of year.
“When we tell him it’s time to go to work, he jumps up,” Lori Ireland says.
Autistic business owners are much like other entrepreneurs who concentrate on creating a product or delivering a service, and delegate the administrative work to others, says Vinnie’s father, Gregg Ireland, a mutual fund portfolio manager and co-founder of Extraordinary Ventures, a group that finds opportunities for autistic people.
“In my business, I wouldn’t be marketing. I wouldn’t be able to keep the books,” Gregg Ireland says.
Ireland’s parents wanted to find a way to keep their son occupied and to build his self-esteem. They got the idea for Weed Whacking Weasel because he enjoyed doing gardening.
“A small business is so flexible and adaptable, and it’s just suitable to solving our problems,” Gregg Ireland says.
—————
Online:
www.autismcenter.org
www.templegrandin.com
www.autismspeaks.org
www.stutteringkingbakery.com
www.poppinjoes.com
www.greenbridgegrowers.com
—————
Follow Joyce Rosenberg at www.twitter.com/JoyceMRosenberg

SALISBURY — Verne McCombs’ hands are in constant motion under the 1950 model electric grinder. “He’s a machine, I tell... read more