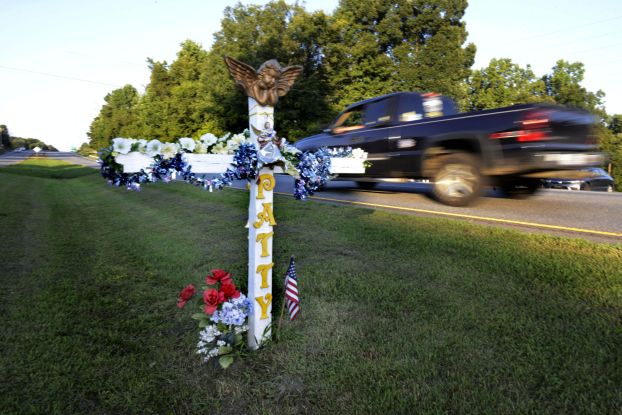 Every so many miles throughout Rowan County and along Interstate 85 lies a collection of crosses, ribbons and teddy bears nestled in the grass. The items together are often the end result of a collision that claimed a life.
Some of the roadside memorials are faded, while others have been freshened up at the holidays or on the anniversary of the crash.
In 2001, North Carolina banned these memorials after state officials said they were a safety hazard, yet these markers remain.
“According to state law, they are not supposed to be in the right-of-way,” said Pat Ivey, division engineer for the N.C. Department of Transportation.
Ivey is an engineer for a five-county region that includes Stokes, Forsyth, Davie, Davidson and Rowan counties.
He said the Department of Transportation does not remove memorials unless they are an imminent safety concern for people who stop to place them or people who look at or update the memorial.
“We do discourage them,” he said simply.
He said the policy is consistent statewide, but as a sign of respect for families and friends who place a memorial on the roadside Transportation Department employees “do not make it a practice to remove those.”
He said the department does recommend families honor their loved ones through Adopt-a-Highway programs or placing a memorial tree or shrub within miles of the crash site. The minimum cost for a tree or shrub is $250 depending on the type and size plant used.
Ivey said the state does try to work with families, but dissuades them from erecting memorials in the right-of-way.
He added the right-of-way limits vary on secondary and primary roads. The right-of-way is considered 30 feet from the center of the road, while primary roads and interstate right-of-ways can be 300 feet wide.
“We have mowed around them,” he said.
Ivey said roadside mowing is done by a contractor and some have likely mowed over some memorials if they were not immediately visible.
“I think most of the time, they try to avoid them as long as it does not create a problem,” he said.
He said there have been instances when contractors have not mowed a strip of grass out of respect for a memorial and people have complained of tall grass.
“We try to balance,” he said.
While out investigating traffic collisions, Master Police Officer Matt Benjamin said he’s seen a number of roadside memorials.
“In my personal opinion, I don’t think they are a nuisance or a hazard, the ones that I’ve seen,” he said.
The Salisbury Police Department officer said he thinks the markers serve two purposes — closure for the family and self-reflection for other motorists to slow down when traveling.
“I don’t think there’s too many people who drive by them and don’t know what they mean,” Benjamin said.
He couldn’t recall any particular accidents he’s actually investigated where families have placed memorials, but he certainly is aware of the memorials that are placed throughout the city.
Benjamin said in his opinion, if the markers aren’t obstructing someone’s view of traffic and aren’t causing a distraction, then they remain. He also said memorials should stay if the right-of-way is still able to be maintained with the memorial there and if it’s “not bothering anybody.”
“If one person changes their driving habits because of that … or second guesses something they were doing in light of the fact that someone has died on that road, then it has served a good purpose,” he said.
N.C. Highway Patrol troopers investigate many more collisions throughout the county and along the interstate. Many have come across countless roadside memorials.
First Sgt. F.C. Ferguson said he’s of the opinion that roadside memorials are fine as long as they are not a traffic hazard.
Ferguson said of the memorials he’s come across, they’ve been off the roadway.
“If it helps the family with their grief process, I don’t have a problem with it,” he said.