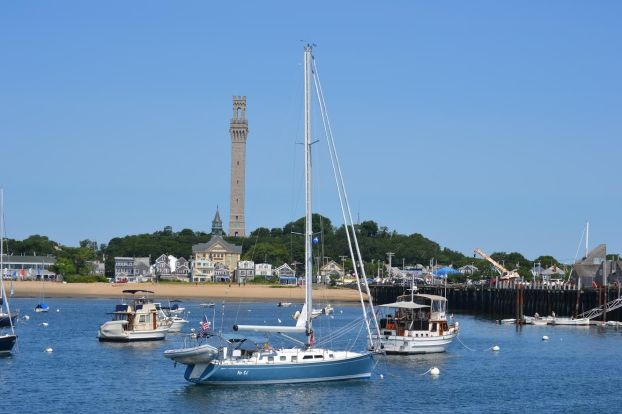 f you can take only one summer vacation you have a tough choice to make. The beach is great, but the cool, fresh air of the mountains is equally seductive. Can you have it all?
If you’re willing to travel 800 miles or so north, North Carolinians can find the best of both worlds at Cape Cod.
“After weeks of air conditioning, scorching temperatures, and sticky nights, I look forward to open windows, no pollen (despite the plentiful blooming flowers), and gentle breezes,” says Emily Santillo, a Salisbury resident who vacations annually on Cape Cod with her husband, Luke (and this year, for the first time, sweet baby Grant). “It’s the perfect combination of the cool North Carolina mountain summers I grew up with (in Boone) and the warm salty air of our Southern beaches.”
The cooler summer temperatures have also, for the past few years, lured my native New Englander husband away from his beloved Outer Banks and back to the vacation spot of his youth. This summer, I was finally able to go with him.
Cape Cod is a long, narrow stretch of land jutting out into the Atlantic in the easternmost part of Massachusetts, with more than 550 miles of coastline. Henry David Thoreau described it as “the bared and bended arm of Massachusetts,” with the “sandy fist” at Capetown. Just off the cape are the islands of Martha’s Vineyard and Nantucket, which can be accessed by ferry from Cape Cod.
We chose to stay on the Outer Cape, which includes the towns of Orleans, Eastham, Wellfleet, Truro and Provincetown. We rented a little cottage in Eastham with a bliss-inducing hammock in a shady backyard that made me imagine I was in the mountains. When I was able to tear myself out of the hammock, there was an awful lot to do. Home to the 44,000-acre Cape Cod National Seashore, designated by President Kennedy in 1961, the Outer Cape is heaven for nature-lovers.
We didn’t work in any paddling during our week, unfortunately, but Emily and Luke Santillo always make time to kayak the Cape’s freshwater kettle ponds during the annual Cape vacation they share with their extended families. “The wooded and sometimes steep banks isolate you from the sounds of civilization,” Emily says. “An early sunny morning outing on the water often yields my favorite weather, allowing me to wear a swimsuit and hoodie (warm but not hot, cool but not cold).”
When you want a break from activities involving water, the Cape Cod Rail Trail is a wonderful place for biking, whether you’re a serious cyclist or a casual cruiser. We chose our rental cottage in part based on proximity to the trail, which extends for 22 miles through villages and marshes and past sandy beaches. The trail follows the Old Colony Railroad right-of-way from South Dennis to South Wellfleet, passing through Marwich, Brewster, Orleans and Eastham. Walkers, runners, and in-line skaters co-exist peacefully, more or less, with bikers. If you’re hungry, veer off the trail to treat yourself to a lobster roll or, if it’s cool out, some New England clam chowder. (My husband says I have to mention Arnold’s in Eastham, a seafood restaurant so popular that the line is usually out the door.)
Right next to Eastham is the town of Wellfleet, which is known for its oysters and bustling harbor. It’s the narrowest part of the Cape, and visitors here have convenient access to the trifecta of water fun: big wave beaches, the serene bay and freshwater ponds. With their towering sand dune cliffs and dramatic views, Wellfleet beaches are like nothing I’ve ever seen. Scrambling up and down the dunes, especially if you’re lugging beach gear, is challenging but worth it. Keep an eye out for seals, which are abundant just off shore.
We didn’t get a chance to experience it, but the Wellfleet Drive-In is a popular retro escape, a taste of yesteryear that even includes 1950s mono speakers (techies, don’t worry; you can tune your radio to the drive-in’s own FM station).
If you continue north up the cape you will hit Provincetown. An artsy town long known for its acceptance of the LGBT community, Provincetown is the perfect day trip. Hang out and watch the entertaining parade of humanity on Commercial Street, shop for art, or linger in an outdoor café. Or hike up the Pilgrim Monument, a 252-foot-tall all-granite tower commissioned in 1910 by President Teddy Roosevelt to commemorate the site of the Mayflower’s first landing in the New World. If the sea beckons, whale-watching excursions leave several times daily from the harbor, and whale watchers are rarely disappointed. We found the boat ride so lovely that even if we hadn’t seen any whales the trip would have been worth it.
I’m hoping next year we can take Emily’s suggestion and catch a Cape Cod Summer League baseball game. At the Chatham Anglers’ field, Emily advises bringing a blanket and a bag of peanuts and watching from the outfield embankment for a classic Cape experience.
I’m a Cape newbie, but the week I spent there made me understand what Emily meant when she said she’d gone and left her summer vacation heart in Massachusetts. North Carolina will have to forgive us, because I might have left mine there, too.