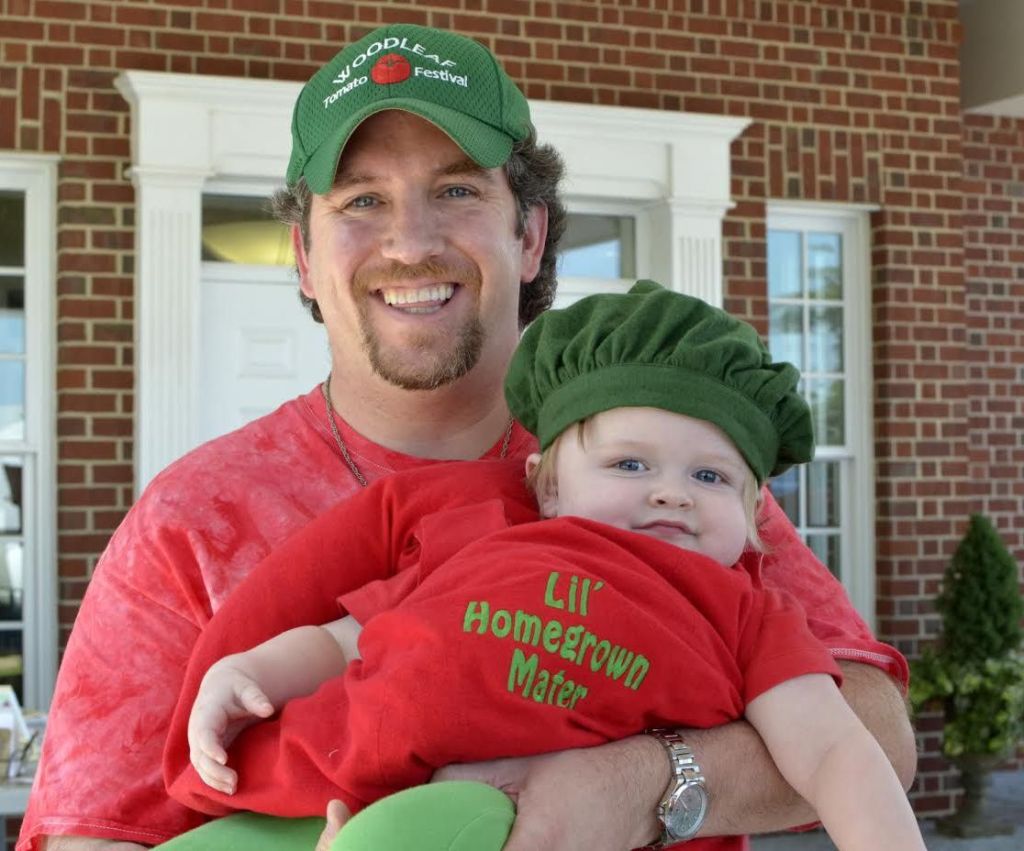 WOODLEAF — Thanks to enough rain and temperatures that haven’t been too hot, the tomato crop in Woodleaf is coming in just fine this year.
And just in time, too, for the annual Woodleaf Tomato Festival, which drew several hundred to the grounds of Unity Presbyterian Church on Saturday.
With a parade full of floats and restored antique cars, live entertainment and more than 30 vendors, there was plenty for all to see.
But the center of attention was the red, ripe fruit that many say is their favorite vegetable.
Jacob Watson stood by the tent of his family’s business, Wetmore Farms, which he said is run by his father, grandfather and great uncle.
Nearby, baskets full of different tomato varieties were waiting for shoppers to pick their favorites.
“We’ve got three different fields, and finished (harvesting) the first one the beginning of this week,” Watson said.
As for the second crop that’s on its way, he said, “there’s about 16,000 plants in it, maybe three and a half, four acres.”
In other words, a lot of tomatoes.
The Rev. Phil Hagen, pastor of Unity Presbyterian, said three local family farms — Wetmore, Correll and Fleming — were represented at this year’s Tomato Festival.
Woodleaf’s tomatoes are sold around North Carolina at produce stands and markets, Watson said.
And there were also peppers, melons and other produce on sale, along with vendors offering old-fashioned jams, jellies and pickles.
Hagen said this year’s weather helped the turnout. “Last year, it was 65 and raining,” Hagen said.
For the past eight years, Hagen said, the event has helped fund the new fellowship hall at Unity Presbyterian.
“This year, we’re tithing 10 percent of the proceeds to the West Rowan Bible Teaching Association,” Hagen said.
The live entertainment, pageants, parades and sales give the event the feeling of a homecoming celebration.
Kids and adults in costumes celebrated the tomato theme, right down to Hagen’s toddler son, Jack, in a red costume with “Little Homegrown Mater” on the front, and a green “stem” cap.
“This is a way to bring the community together,” Hagen said.
Many gathered together under a nearby tent for farm-fresh tomato sandwiches.
It’s a simple meal to make, but there’s a trick to making a perfect “mater sandwich.”
“White bread, tomato, mayonnaise, salt and pepper,” said Nancy Malone, who was helping sell the sandwiches and other goodies.
From her spot on the other side of the tent, Woodleaf native Tania Frazier spoke up.
“Only Duke’s. It’s the best mayo,” Frazier said. “That other stuff is for Yankees.”
Organizers said the church ladies sold so many sandwiches that, several times, they ran out of bread and mayo. Someone ran to the store for more, and they started up again.
“And we’ve been slicing tomatoes, I don’t know how many. A pile,” Malone said.
Frazier lives in Charlotte now, but said she comes back every year for the Tomato Festival.
Not only is the food good, Frazier said, but she comes to see people she grew up with.
This year, she said, the festival “was bigger than ever.”
And, of course, she bought some tomatoes to take home, although she said she’s seen Woodleaf tomatoes for sale in Charlotte.
“These are the best tomatoes in the world,” Frazier said.
In the children’s pageants, Raelin Stamp was named Little Miss Mater. Jack Hagen won the contest for Lil’ Mater Sprout, while Will Brainard was named Lil Tommy Toe.
And John Thompson was named Miss Tomato Festival 2014.
This year’s Tomato Festival parade honored former Woodleaf Elementary School Principal Susan Herrington, chosen to be this year’s grand marshal.
Peg and June Williams, a local couple who Hagen said had been married for 65 years, were the king and queen of the Tomato Festival.
“The folks that I talked to said we had more people this year than ever before,” Patti Safrit said.
She attributed the higher turnout to increased advertising, including the debut of the giant tomato.
“Every year, we try to add something new, yet keep all the good things that worked,” Safrit said. “They know that that’s going to be there, but when they see all the new stuff that’s coming, they get excited,”
That giant tomato isn’t going anywhere, Safrit said.
At New Year’s Eve, she said, plans are in place to drop the giant tomato, just as they drop a ball in Times Square in New York.
The focus is on family entertainment, Safrit said. “We open it up to the whole community. Other churches set up here. … It’s been a fun day,” she said.
The festival didn’t just draw locals, but also brought people in from out of town.
Ray Zeman, of Davidson, said he heard about the Woodleaf Tomato Festival from a friend, and had to come see it in person.
For Zeman, the best part was the produce — “being able to get the fresh vegetables, and the tomatoes that are so good from this area,” he said.
Indeed, Hagen said he’s seen crowds at the festival growing year over year.
“For us, it’s a chance to reach out into the community to demonstrate our faith, and the necessity to be one family,” Hagen said.
And a chance for a small community to celebrate its farming traditions, and spend a summer day having down-home family fun.
Contact Hugh Fisher via the editor’s desk at 704-797-4244.