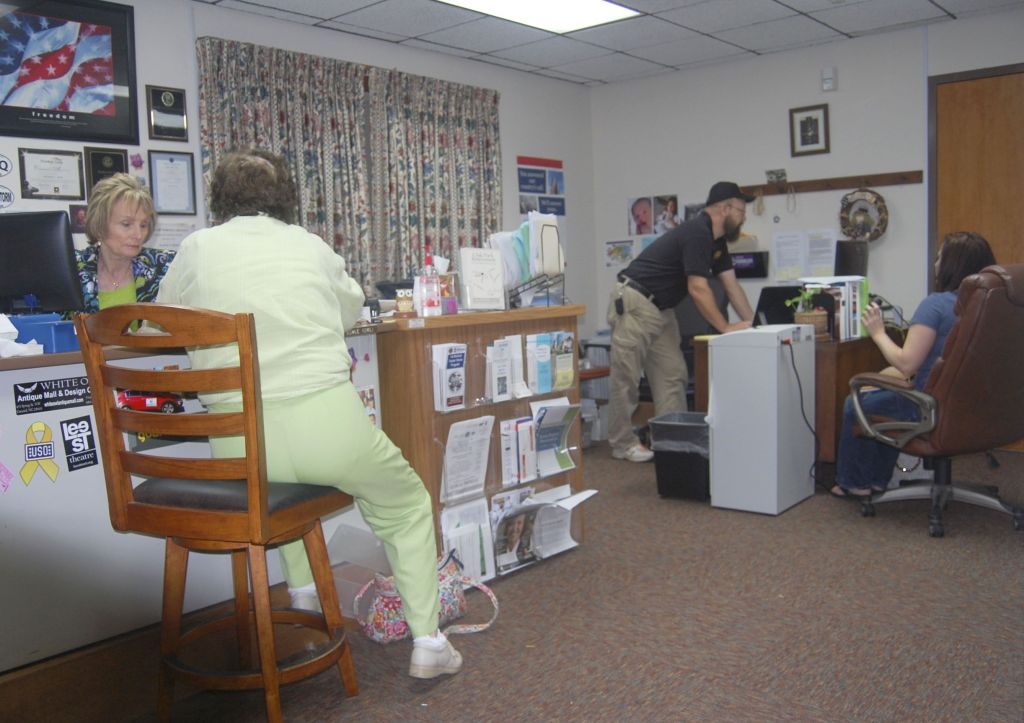 Brandy McGuire takes a chair in the Rowan County Veteran Services Office. McGuire stays seated only a few moments, though, before she and Rick Johnson leave the office and head down the hall at Rufty-Holmes Senior Center.
Johnson pokes his head in the first room they come to, but it’s occupied, so they keep going. At the end of the hall, they find a room that is, for the moment, empty. So they grab it.
Johnson goes looking room where he and McGuire, a U.S. Army veteran, can conduct their business privately because a few feet away from his desk, fellow Veteran Services Officer Elaine Howle is also working with a client.
This scene repeats itself about four times a day, said Johnson, who came on as the county’s second Veteran Services officer in February. It’s necessary to maintain privacy and confidentiality where the law requires it, he said, “plus it’s just hard to talk over each other.”
“If somebody’s wanting to talk about a sensitive issue, it’s just not right,” he said.
Johnson and Howle now share a 300-square-foot office at the Senior Center, to which the Veteran Services Office was relocated a couple of years ago. While it’s bigger than the first office Howle had there, it makes for cramped quarters with two officers who both work with veterans all day long.
That could be changing soon, in a big way.
County commissioners will consider awarding a bid at their meeting Monday to renovate about 1,600 square feet at the former Salisbury Mall to house a new Veteran Services Office. Two weeks ago, they approved the bid for a new Board of Elections at what’s now called West End Plaza.
The county bought the troubled 320,000-square-foot mall in December for $3.425 million with plans to renovate portions and move some of its departments there while maintaining leases with existing retailers. The purchase proved controversial and helped fuel opponents’ campaigns in this springs primary elections.
Candidates running for what will constitute a new majority on the Board of Commissioners after the November elections have asked its current members not to spend more money on the mall, and most of them signed a letter asking the state not to OK a loan to cover its purchase and some renovations.
The Local Government Commission voted Aug. 5 to delay action on the loan application — which would reimburse money the county took from its savings to buy the mall — until at least October. But county commissioners are going ahead with renovations.
Johnson said he’s not taking a position on whether the mall is the best place for the Veteran Services Office.
“Adequate space is adequate space,” he said. “I’m not going to argue any way on that, because it’s just nice to have anybody looking out for us.”
He did point out, though, that plans call for the Veteran Services Office to be located next to Thelma’s restaurant, which has opened a coffee shop that caters to veterans and offers them free coffee and a place to meet and talk on Tuesday mornings.
“It’ll give us more opportunity to go over and meet with the veterans face to face and do more community outreach,” Johnson said.
A drawing Johnson provided shows the new Veteran Services Office would have three private offices, allowing the department to expand with another part-time or full-time officer in the future, if needed. And with Johnson and Howle already booked weeks in advance, that could be coming.
“There’s a large influx of veterans who are going to be coming out of active duty,” Johnson said.
Projections supplied by the Defense Manpower Data Center and based on the 2010 Census show the numbers of active-duty service members leaving their services and returning to North Carolina nearly doubling from 2013 to 2015. This year, the number is projected to be about 19,600; next year, 22,049; and 2016, 21,834, before falling to about 7,200 in 2017.
And Johnson said Rowan County, because it’s home to the W.G. (Bill) Hefner VA Medical Center, has historically gotten about 5 percent of the state’s veteran population.
“We’re just going to have more and more opportunities and more and more need,” he said.
The new office, which would be completed in November if commissioners award a bid, would also have a reception area. Currently, Johnson said, “people walk in that door while we’re trying to work.”
For now, Johnson said, he and veterans his office serves will have to keep shuffling off several times a day looking for a place to conduct business. Sometimes, even that’s not fruitful. Recently, with no rooms available, he had to settle for the quietest corner of the hallway.
Veterans, Johnson said, “are mostly the type of people who just don’t complain.” Even so, he said, it’s not a good practice.
“Think about how that makes a veteran feel when you’re wandering from room to room looking for a place,” he said. “It wouldn’t give you a vote of confidence.”