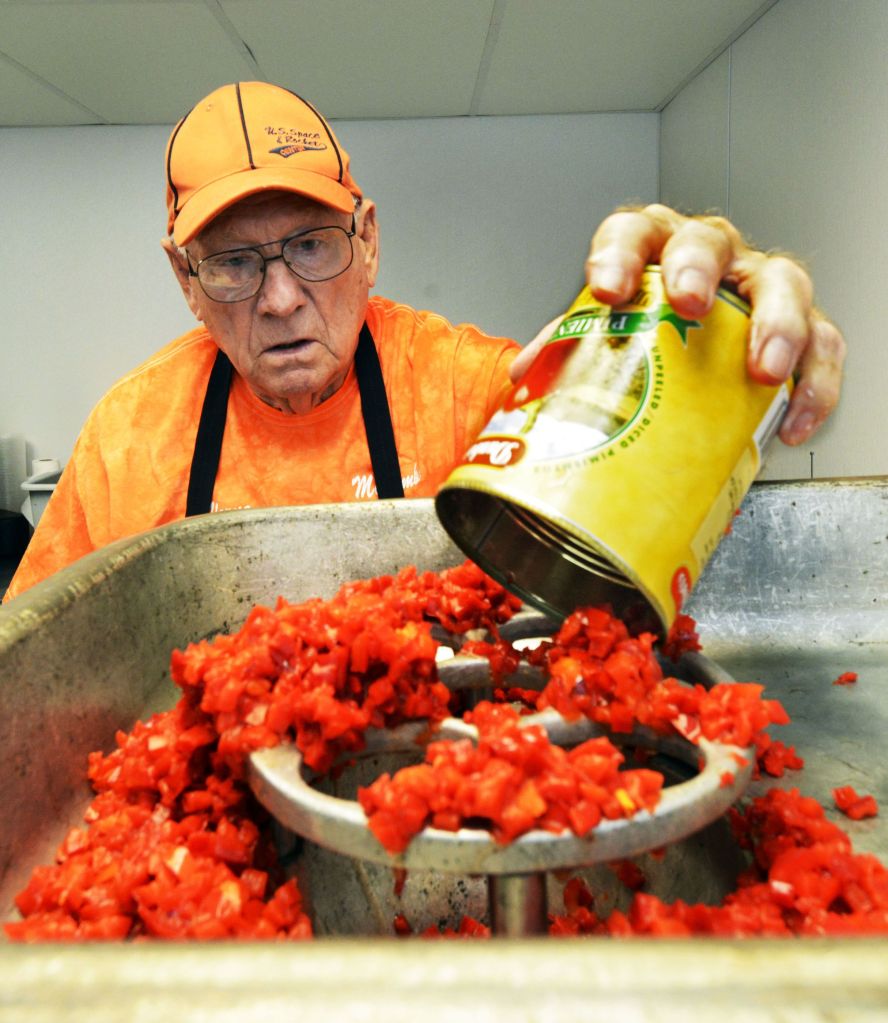 SALISBURY — Verne McCombs’ hands are in constant motion under the 1950 model electric grinder.

The cheeses — sharp, mild and daisy cheddars, Colby and American — come out of the grinder like spaghetti strings. McCombs, the mix-master, catches their fall and blends the cheeses with the ground pimento peppers, Duke’s mayonnaise, sugar, vinegar and evaporated milk already in the big tub.

His arms never stop going back and forth.

Once all the cheeses have been blended to the texture McCombs is looking for and he sneaks a confirming taste, he rolls the tub on a cart over to a work table holding a small scales. There, he scoops the pimento cheese into 16-ounce and 8-ounce plastic containers and weighs each one.

McCombs is almost always dead-on with his measuring, and as he stands there, twisting back and forth from tub to scales, he hardly looks up. Again, his grandson is impressed.

“He has an unofficial Ph.D. in this.” Blalock says.

If you haven’t figured it out by now, Verne is back. Two mornings a week, the 83-year-old McCombs travels over to daughter Julie Blalock’s house and helps her produce another batch of the sought-after McCombs & Co. pimento cheese, which has been around since 1958.

In 1999 at age 68, Verne closed the McCombs & Co. store in Faith, where he had made the pimento cheese for decades. On a small scale, he continued producing the spread for awhile before eventually turning over his recipe to niece Kim Shores, who kept the pimento cheese legacy alive these past six or seven years.

Meanwhile, with his 70-hour weeks at the grocery behind him, Verne enjoyed retirement with his wife, Mary Ellen.

“Kim actually talked to me about the business before she started it,” says Julie Blalock, whose “real” job is as a financial advisor. “She wanted to make sure neither me nor my sister wanted to do it and that it wouldn’t upset us.

“… We were thrilled she wanted to keep it going.”

Shores decided earlier this year she was getting out of the pimento cheese business, and she asked Julie whether she were interested now. Julie talked things over with her husband, Jeff, and they floated the idea past Verne one day when he was visiting.

“Well, I can make it for you,” Verne offered.

Julie wanted him to know they weren’t asking him to do that, recognizing he already had undergone surgery on both hands from all those years of work at the store.

Verne tells the story like this: “She wanted to know if I’d help her out a little.”

Julie worked with her cousin Shores for a time learning the ins and outs of the business. Meanwhile, she and Jeff converted a basement area of their house into a nice-sized kitchen, which for their wholesale business, had to pass inspection by the N.C. Department of Agriculture.

In May, Julie took over McCombs & Co. and the operation moved to the Blalock house. Jarrett, who will be 25 next week, became sales chief; and Verne, the mix-master.

Jarrett handles most of the deliveries to the company’s retail customers (see box), and he also mans a spot at one of the farmers market locations.

On production day, he seals the containers his grandfather has weighed out with a hot gun and plastic wrap.

Julie Blalock, a great cook in her own right, also makes 65 pounds of McCombs & Co. slaw weekly, which is growing in popularity with her egg salad. (The family sells spicy “Firecrackers” to go with their spreads.)

Julie handles the paperwork for the business and ,with Jeff, does whatever else has to be done, including going to the farmers’ markets.

If he’s not at his job in Mooresville on production days, for example, Jeff Blalock slices up all the cheese so it can be fed into the grinder.

McCombs & Co. makes close to 200 pounds of pimento cheese a week for sale in six local stores, a restaurant and two farmers’ markets. That’s more than the 158 pounds a week Verne used to make in Faith at a time the newspaper called him “The Big Cheese.”

He didn’t like the nickname, because of all the ribbing that went with it.

What’s it like, working with the pimento cheese again?

The always low-key McCombs shrugs off his contribution. “I just mix and help with weighing it,” he says.

Verne doesn’t use any measuring cups when he throws in a couple handfuls of sugar, dumps in the Duke’s or pours in some evaporated milk. It’s all pretty much by his well-honed pimento cheese instincts.

Longtime pimento cheese connoisseurs can tell, however, that Verne is back in the production mix.

“When he does it, it’s just going to be different,” Julie says.

Asked to describe their pimento cheese compared to others, the family members say Verne’s recipe doesn’t rely so much on mayonnaise for creaminess. If it needs to be creamier, Verne adds a dash of evaporated milk instead.

If customers taste salt, it’s coming from other ingredients such as the cheese or mayonnaise.

Jarrett Blalock says what makes his grandfather’s pimento cheese different is that it’s made with heart and soul.

Verne himself doesn’t eat a lot of pimento cheese — probably two sandwiches a month, he says.

There are many ways to enjoy pimento cheese, of course. On crackers. On celery. On hamburgers. As a grilled pimento cheese sandwich.

McCombs & Co. pimento cheese has a following. Natives who return to Rowan County on visits often buy some to take back to their new homes. Julie Blalock says someone recently ordered three quarts for a wedding in Los Angeles, and she also has shipped some to New York City.

As for being able to work with her father two mornings a week, it reminds Julie of sitting in the back of the Faith grocery as a kid and watching him make another batch of pimento cheese.

She loves this new-old experience.

“He’s also a lot mellower than he used to be,” Julie says.

Wineka column: When it comes to travel, the Ketners…