North Rowan battles for win over Rocky River in scrimmage 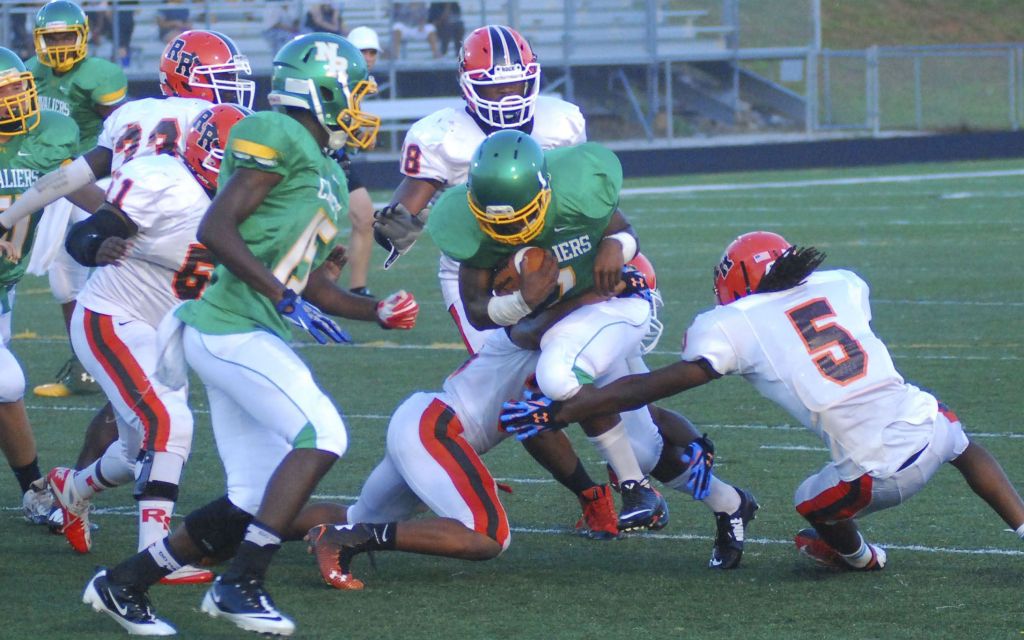 CHARLOTTE — North Rowan’s final test before the season did not get off to a good start.
Rocky River’s Elijah Jett streaked up the sideline for a gain in the neighborhood of 70 yards. Jett was looked assured of reaching the end zone, but the score was thwarted on a shoestring tackle by Raekwon Wynruit. Rocky River scored three plays later for a quick 7-0 lead.
The Cavaliers, however, settled in and played well in the middle of the scrimmage for a 14-7 victory over the Ravens in the third game of the CarolinaPreps.com Jamboree at Rocky River.
“There was plenty of mistakes to be corrected, but we’ll go back tonight, grade the film and start back on Monday,” North Rowan head coach Joe Nixon said.
The Cavaliers open the 2014 season Friday at home against East Rowan. The game is at 7:30 p.m.
North Rowan quarterback Alexis Archie was part of a few big plays. In the first period, he threw a pick-six that was returned 70 yards. That bullet was dodged when an inadvertent whistle by an official negated the play.
In the second period, the senior quarterback found Sakil Harrison over the middle of the field for a big gain on fourth down. The 20-yard play got the ball inside the Rocky River 10.
On the Rocky River 3, Jareke Chambers got the ball in the backfield. He stumbled, recovered and turned up field for the touchdown. The game was tied at 7 with 9 minutes, 44 seconds left in the second period.
Chambers, who ran for more than 2,000 yards in 2013, unofficially ran for 30 yards on seven carries with the touchdown.
Later in the period, a shanked punt by the Ravens from inside their own end zone gave the Cavaliers the ball inside the Rocky River 10. Andre Cowan pounded the ball into the end zone from three years out for a 14-7 lead.
Rocky River had one more chance. The Ravens moved the ball down the field as the clock worked its way toward zero. The Cavaliers’ victory was sealed on an interception by Jalen Sanders in the end zone with less than 30 seconds left in the scrimmage.
“We faced adversity and the guys responded,” Nixon said.