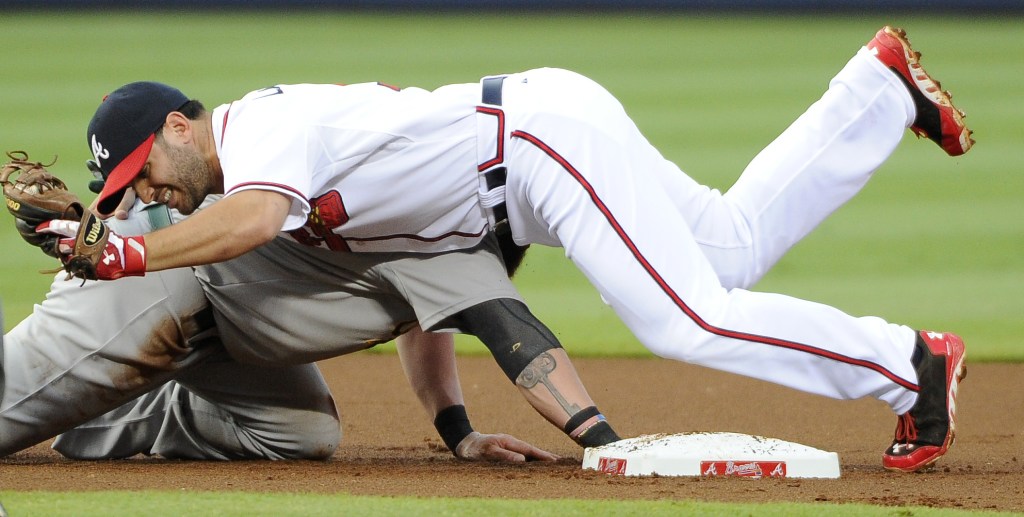 ATLANTA (AP) — Freddie Freeman said before the game the slumping Braves needed an immediate turnaround.
The power-hitting first baseman then backed up his challenge at the plate.
Freeman hit a three-run homer, one of four by Atlanta, and the Braves beat the Oakland Athletics 7-2 on Friday night in the opening game of the interleague series.
Justin Upton and Evan Gattis hit homers off Jason Hammel (1-5) in the second inning. Rookie Phil Gosselin hit a two-run homer, the first of his career, off Jesse Chavez in the sixth.
The Braves had not scored more than four runs in any of their past six games. They entered the game having lost 12 of 15.
Atlanta is six games behind first-place Washington in the NL East.
“Everyone wants to say we can’t panic, but we’ve got to go,” Freeman said before the game. “… The time is now.”
After the game, Freeman applauded Atlanta’s power surge.
“That was a good night,” Freeman said, noting Oakland brought the majors’ best record to Atlanta.
“We always play those teams the hardest, and it was no different tonight,” Freeman said.
Alex Wood (9-9) allowed two runs in six innings — a two-run homer by Nate Freiman in the fourth.
The A’s have lost three straight and five of six.
“We’re just going through a tough time right now,” Oakland manager Bob Melvin said. “You start to press a little bit offensively and it can be contagious as a group. You start swinging at some pitches out of the zone. We’re pretty good about looking for our pitch and waiting for it. We haven’t been as good here recently.”
Wood allowed four hits in six innings. Relievers David Carpenter, Jordan Walden and James Russell combined for three perfect innings.
Hammel allowed five runs and six hits, including three homers, in three innings. He was pulled after walking B.J. Upton to open the fourth.
“Three-run homers do some damage,” Hammel said. “Solo ones you can deal with, but that third one obviously was a big one.
“Otherwise I felt great. My body hasn’t felt that good in a while.”
The Braves had their second four-homer game of the homestand and only their fourth game with four or more homers this season. They also hit four homers in a 7-6 win over Washington on Aug. 8.
Before that, the Braves hadn’t hit four homers in a game since May 25 against Colorado. Their high mark was five homers at Philadelphia on April 14.
Freeman’s homer, his 17th, drove in Jason Heyward and Gosselin, who reached on singles. Justin Upton leads Atlanta with 22 homers.
Chris Johnson was credited with a ground-rule double when A’s centerfielder Coco Crisp lost his deep fly ball in the lights in the third. The ball landed well behind Crisp and bounced over the wall. Hammel hit Gattis with a pitch and then escaped the jam.
A NIGHT OF FIRSTS
Gosselin’s first homer came in his first start at shortstop. He previously started two games at second base and one at third.
His homer followed a two-out fielding error by Freiman, the first baseman, on Heyward’s grounder.
“It was awesome just to contribute to a win tonight and get the series off on the right foot,” Gosselin said.
OVERTURNED
After Wood issued one-out walks to Jonny Gomes and Josh Donaldson in the first, the left-hander made a pickoff throw to second base. Umpire Ted Barrett called Gomes safe. Braves manager Fredi Gonzalez challenged the ruling and the call was overturned following a review of 1 minute, 50 seconds.
The ruling proved important when Derek Norris followed with a single to left field that likely would have driven in Gomes from second.
TRAINER’S ROOM
Athletics: CF Craig Gentry, on the 15-day disabled list with a broken right hand, will take batting practice with Triple-A Sacramento on Saturday.
Braves: LF Justin Upton started after leaving Thursday night’s game with a mild left hamstring strain. … SS Andrelton Simmons was held out after having two teeth extracted.
UP NEXT
Athletics: RHP Sonny Gray will try to snap a streak of losses in three straight starts in Saturday night’s game. The three-game skid is the longest of his career.
Braves: RHP Julio Teheran will try to improve his 2-3 career interleague record in his first appearance against Oakland. He is 1-2 with a 2.41 ERA in two starts against AL teams this season.