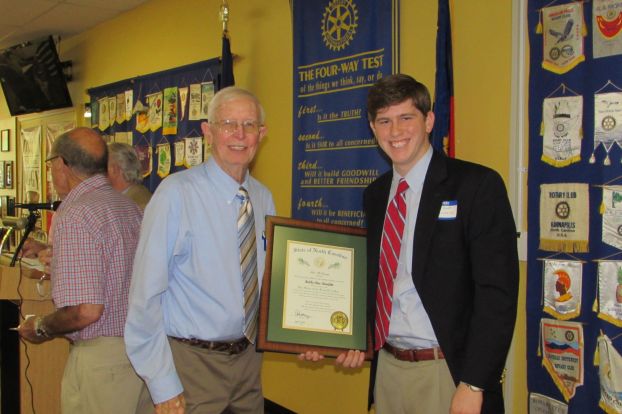 KANNAPOLIS — They had anticipated 40 people at the Kannapolis Rotary Hall on Saturday, but instead they got four times that.
“We’ve got 140 chairs here,” Kannapolis Rotary’s William Andrews said. “It won’t be enough.”
There were tables filled with wrestling officials and tables crammed with wrestling coaches and tables stuffed with former wrestlers and tables packed with teachers. The common theme uniting those folks was they felt they influence of Bob Mauldin, who is known as “Mr. Wrestling” in North Carolina.
Clay Ruff represented the governor’s office to, after a series of short speeches that were equal parts roast and testimonial, award Mauldin with the Order of the Long Leaf Pine. That’s a prestigious award North Carolina grants for extraordinary service, community contributions or extra effort.
Mauldin, who had no clue he was being honored until he showed up, qualified on all counts.
“I found out about longleaf pines when I was stationed at Fort Bragg,” Mauldin said. “But I never knew I’d get one.”
Mauldin, born in 1936, is still active and still unique. He never wrestled a match, and yet he’s in the National Wrestling Hall of Fame for lifetime service to the sport.
He’s lived a charmed life. Even when he messed up, things worked out.
“I was shy and didn’t want to give an oral report, so I failed my English class,” Mauldin said. “If you didn’t pass English, you didn’t pass your grade, so I got held back a year. That was a good thing. When I was a senior at Appalachian [State University], I met my future wife (Donna), who was a freshman. If I’d given that oral report I never would’ve met her. Yes, the good Lord has a plan for Bob Mauldin.”
Mauldin played football and basketball in high school and played soccer in college. At Appalachian State, he got interested in wrestling. As team manager, he washed uniforms, cleaned mats and learned a lot.
After Appalachian, Mauldin came to A.L. Brown as an assistant coach in football and track and the head wrestling coach. He recruited good football players to wrestle, guys like Mike Freeman, the fullback who became a 19-0 Western North Carolina High School Activities Association champion.
Mauldin started a publication called “Mat News” in 1968. He slowly established a network of wrestlers, officials and coaches. Coaches from across western North Carolina started sending him scores.
“I remember Bob handing me a Mat News in 1972,” said David Rothwell, who was coaching Albemarle. “It was just $2 or $3 for eight issues.”
Mauldin’s life changed when friend and colleague Dan Hamrick talked him into applying for an Experienced Teacher Fellowship at the University of Tennnessee,
“I thought he was trying to get rid of me,” Mauldin said with a laugh.
Mauldin came back to Kannapolis with a degree in school administration. He was a principal 24 years and a beloved figure at McKnight School where all the youngsters learned to sing “The Old North State” under his watch.
Tamara Jones remembers Mauldin steering her through her first day as a young kindergarten teacher at McKnight. She’s still thankful and is heading back to school Monday for her 28th year.
McKnight became a wrestling official after he stopped coaching. He remembers the first match he was booked to referee — Watauga at Myers Park.
“I drove to Charlotte apprehensive and arrived sweating and with my hands shaking,” Mauldin said. “The gym was empty — snow had kept Watauga from making the trip. All I could say was ‘Thank the Lord.’”
He became an outstanding official. Then he became a booking agent and administrator for officials.
He mentored aspiring referees. Salisbury’s Howard Cowan was ready to quit after the first match Mauldin booked him for was a disaster. But Mauldin has a gift for encouragement, and Cowan stuck with it. Cowan reached the top and has officiated state and national championship matches.
All the while, Mauldin kept pumping out “Mat News.” The publication is still alive and well. Former North Rowan wrestling coach Ralph Shatterly was present on Saturday, He’s one of the two original subscribers to “Mat News” and has never missed an issue.
In 1999, the “Mat News’ was honored as the national wrestling publication of the year. In 2000, Mauldin was recognized by the N.C. High School Athletic Association as one of the 50 men and women who had made a difference in N.C. athletics in the 20th century.
Mauldin was inducted into the National Wrestling Hall of Fame in 2004.
In 2010, 50 of his former A.L. Brown wrestlers, boys he helped turn into men, threw a surprise party. One was an ex-soldier who still carried the letter Mauldin sent him in Vietnam.
For Mauldin, it’s been a lifetime of achievement, but mostly it’s been a lifetime of encouragement and service. Beyond sports, he’s been a great Sunday School teacher. He’s practiced what he’s preached. People will tell you he holds the records for funeral visitations and hospital visits.
Mauldin has always put others ahead of himself. Saturday, it was his turn to take a bow.

GREENSBORO — There were some mistakes in his first round in a PGA Tour event on Thursday, but Salisbury native... read more