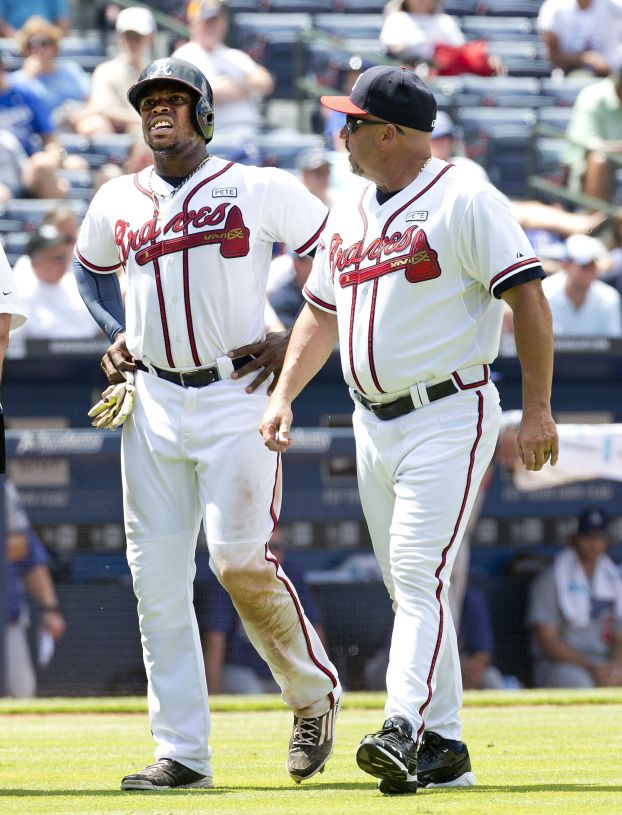 ATLANTA (AP) — Despite hitting only .229 in the first 12 games in August, Dee Gordon remained confident in his approach as he refused to make changes that might lead to bad habits.
Gordon had three hits and scored four runs to lead the Los Angeles Dodgers past the slumping Atlanta Braves 6-4 on Thursday.
Gordon, hitting .291 overall, also stole two bases, increasing his total to 54, the most in the major leagues.
Gordon had plenty of help. Yasiel Puig and Adrian Gonzalez, who followed Gordon in the batting order, each also had three hits. Gonzalez drove in three runs.
Drew Butera hit a two-run homer, his first in almost three months, in the second inning for the NL West-leading Dodgers,
The Braves have lost 12 of 15.
Royals 7, Athletics 3
KANSAS CITY, Mo. (AP) — The Kansas City Royals didn’t let Jarrod Dyson’s defensive miscue slow them down on Thursday.
Dyson drove in the tying run in a five-run seventh, while Nori Aoki and Billy Butler each drove in two runs and the surging Kansas City Royals rallied to defeat the Oakland Athletics 7-3.
The Royals have won 18 of 22 to move 12 games above .500 for the first time since July 20, 2003.
The Royals took the season series, winning five of seven against the Athletics, who have the best record in the majors.
Aoki’s two-run triple put the Royals ahead 5-3. Butler’s single scored Aoki and Alcides Escobar.
Right-hander Jeff Samardzija (3-2) took the loss, giving up four runs, three earned, and eight hits in 6 2-3 innings.
Nationals 4, Mets 1
NEW YORK (AP) — Stephen Strasburg bounced back from a poor start to pitch seven efficient innings, Bryce Harper and Adam LaRoche each hit a two-run homer, and the Washington Nationals beat the New York Mets 4-1 Thursday night to set a franchise record with their 11th consecutive win on the road against one team.
Strasburg (9-10) gave up three hits and an unearned run, improving to 2-8 in 13 road starts this season. He struck out eight and walked two.
Washington finished a three-game sweep and increased its NL East lead to six games over Atlanta.