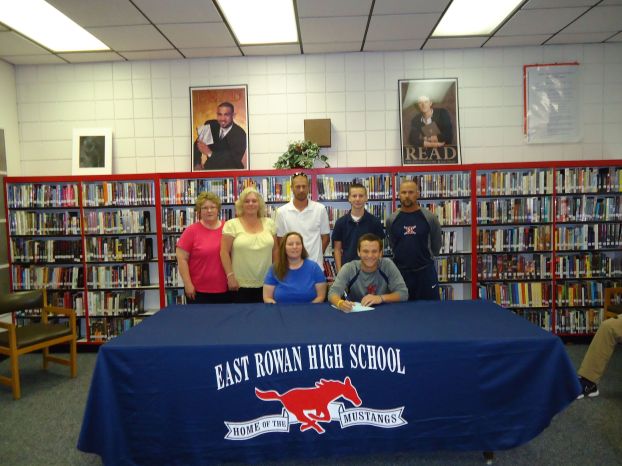 Player of the Year heads to Pitt CC

Caldwell, the baseball player of the year in the South Piedmont Conference and the Mark Norris Memorial Award winner as the Rowan County Player of the Year, planned to be on the road today at 8 a.m. for Greenville’s Pitt Community College.

“Hopefully, I’ll have a chance to just hang out a little bit on Thursday night,” Caldwell said. “But classes start Friday morning.”

Caldwell has the right attitude about what he’s getting into and what he’s leaving behind.

“In college ball, I’m starting from scratch,” he said. “I’m starting over. Everyone is even. I know I’ve got to work even harder than I have before.”

Caldwell will be given a chance to compete for the second base job at Pitt, which is always strong in the junior college ranks and went 32-14 last spring. Former Northwest Cabarrus star Tanner Bigham played second base for Pitt in 2013, did well, and is returning, but there’s a possibility Caldwell could play second smoothly enough to move Bigham, a lefty power hitter, to third base.

“We don’t stockpile players and it’s not like we’re bringing in 10 second basemen for tryouts,” said Pitt coach Tom Eason, who played at nearby East Carolina. “Everyone we bring in here is someone who we believe is good enough to compete for a starting spot. We believe competition breeds success.”

Eason was a college teammate of Carson coach Chris Cauble at ECU, and he’s been in Greenville for 18 years. The last 10, he’s coached at Pitt.

“Coach (Brian) Hightower at East is not one that ever cries wolf,” Eason said. “If he says he got a kid who can play, that kid can play, and there were other coaches in Rowan who recommended Michael and Dustin. They’re both blue-collar kids and we love to get the kids from Rowan County. They’re always winners. We’ve had a great deal of success with them.”

Pitt shortstop Clay Fesperman is a guy from Stanly County that Caldwell knows from American Legion ball. He also knows Bigham from playing against him in high school.

Caldwell had a super senior high school season as East’s leadoff man. He batted .407 in 16 games in the tough SPC, was on base 49 times in 30 games and scored a team-high 29 runs.

“He was the one who made us go,” Hightower said.

At 5-foot-9, 155 pounds, Caldwell isn’t a powerful guy, but he’s a pest offensively and a slick fielder defensively. He’s good at turning the double play and great charging slow rollers and bouncers.

Caldwell may have had a huge summer for Rowan American Legion, but a wrist injury set him back some.

“I was sliding on a steal and bent the wrist backwards,” Caldwell said. “It got to the point where it was bad enough that Coach (Jim) Gantt told me to bunt every time, but then I went 8-for-8, something crazy like that.”

Caldwell had a five-hit game and several four-hit games and helped Rowan go 24-9.

His wrist is fully healed now, so he’ll be ready for a brisk fall baseball schedule at Pitt that will include 15 games against other schools beyond the standard intrasquad games.

“Our goal is to help every kid we recruit get to the highest level of baseball that he can play at,” Eason said. “How high a level Michael can go to, we don’t know yet, but the goal is to help him get to that level, whether it’s Division II, Division I — or the majors.”

Caldwell thinks about being a physical therapist down the road, but for now he’s still a baseball guy 24/7.

“I’m pretty anxious to get back on the field at Pitt and see what I can do,” he said. “This is a brand new beginning for me.”