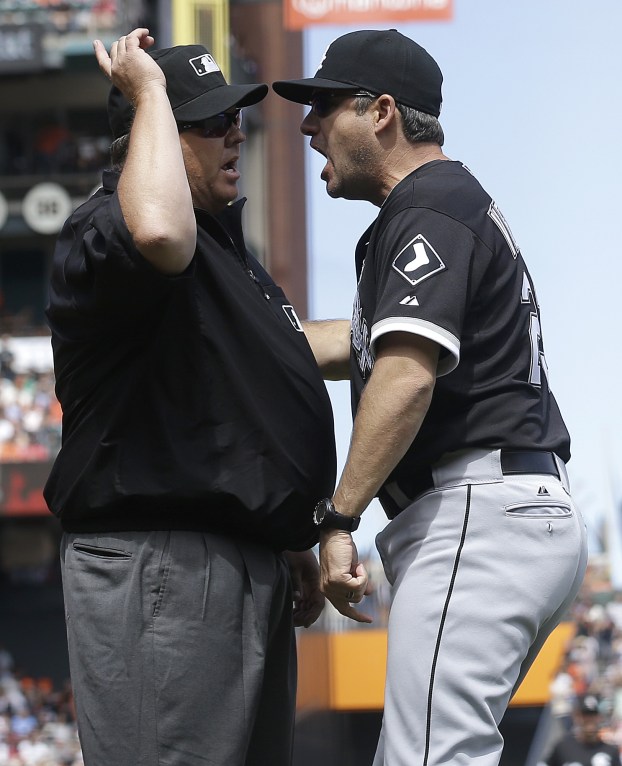 SAN FRANCISCO (AP) — The Giants scored seven runs in the seventh inning after a video review led umpires to overturn an out call at home because Chicago catcher Tyler Flowers illegally blocked Gregor Blanco, and San Francisco went on to beat the White Sox 7-1 on Wednesday.

White Sox manager Robin Ventura argued the call and was immediately ejected, setting off an epic protest in which he repeatedly kicked dirt on the plate.

San Francisco snapped a five-game losing streak and Jake Peavy (1-3) won for the first time since April 25 with Boston. Peavy had lost 12 consecutive decisions, the longest skid of his career.

CINCINNATI (AP) — Mike Napoli hit a two-run homer and drove in three runs to help the Boston wrap up its first winning road trip of more than three games this season.

Anthony Ranaudo became the first Boston rookie to start his career 2-0 since Justin Masterson won his first three in 2008 and the Red Sox finished their eight-game trip with five wins.

Skip Schumaker and Cincinnati starting pitcher Mike Leake each hit their second home runs of the season, but the Reds still ended their seven-game home stand with a 3-4 record after opening by sweeping a two-game interleague series against in-state rival Cleveland.

Burke Badenhop and Junichi Tazawa each pitched one perfect inning before Edward Mujica overcame back-to-back leadoff singles in the ninth for his third save.

Ranaudo allowed eight hits and four runs with one walk and one strikeout in six innings.

CLEVELAND (AP) — Zach Walters’ one-out homer in the ninth inning gave Cleveland a win in the first game of a doubleheader.

Walters, acquired at the trade deadline from Washington for Asdrubal Cabrera, hit a 1-2 pitch from Randall Delgado (1-3) that narrowly cleared the wall in right field.

Walters was called up from Triple-A Columbus on Sunday when outfielder David Murphy and designated hitter Nick Swisher went on the disabled list with injuries. The home run was the fourth of his career.

Cody Allen (4-2) worked around a two-out walk in the ninth.

Trevor Bauer, pitching against the team that took him with the third pick of the 2011 draft, allowed two runs and struck out nine in a career-high eight innings.

HOUSTON (AP) — Joe Mauer homered to break a scoreless game and Kyle Gibson gave up one run in 7 2-3 innings for Minnesota.

Mauer hit a 2-2 pitch into the right field bullpen off Brett Oberholtzer (4-8) to make it 1-0. He extended his hitting streak to 15 games with a first inning single.

Minnesota extended the lead to 3-0 in the eighth inning when Kennys Vargas hit a two-run single into the left field gap off reliever Josh Fields.

Chris Carter singled in a run for Houston.

Glen Perkins pitched a perfect ninth inning to earn his 30th save.

Jedd Gyorko tied his career-high with four hits for the Padres, who are 16-8 since the All-Star break, including winning 11 of 14. The Padres swept a series for the third time this year, all at home.

The Rockies, who have the worst record in the majors at 18-44, struck out 13 times against Ian Kennedy (9-10) and Joaqin Benoit, giving them 66 in their last six games.

Liriano was called up from Triple-A El Paso on Monday. His homer off left-hander Tyler Matzek (2-8) went an estimated 427 feet.

Masterson, acquired in a trade with Cleveland on July 30, allowed three hits — all singles — and no walks and threw only 91 pitches before departing for a pinch hitter.

After recording only six outs in his previous start, he lowered his ERA to 6.00 in three outings with the Cardinals, and 5.14 overall this year.

The 6-foot-6 right-hander improved to 2-1 with St. Louis and 5-6 overall. He also earned his first career RBI in the sixth with a two-out single.

NEW YORK (AP) — Asdrubal Cabrera hit his first home run for Washington and tumbled over a retaining wall to make a terrific catch, leading the Nationals to their 10th straight victory at Citi Field.

Rafael Soriano held on in the ninth inning following Travis d’Arnaud’s leadoff homer, getting the final two outs after the Mets put a pair of runners in scoring position.

Matt den Dekker was thrown out at home on pinch-hitter Eric Campbell’s grounder to shortstop. Curtis Granderson hit a comebacker on the next pitch, giving Soriano his 27th save in 31 tries.

Bryce Harper and Kevin Frandsen each hit a sacrifice fly in the seventh to make a winner of Jordan Zimmermann (8-5).

ATLANTA (AP) — Ervin Santana won his sixth straight start at Turner Field, Justin Upton drove in the go-ahead run in the fifth inning and Atlanta won for the third time in 14 games.

Andrelton Simmons returned to the lineup after missing six games with a sprained left ankle and had two RBIs for the Braves, who had lost 11 of 13.

Hyun-Jin Ryu (13-6) left the game with an apparent right leg injury after allowing six hits and three runs with two walks and seven strikeouts in 5 2-3 innings.

Santana (12-6) improved to 5-0 with a 2.70 ERA in his last six starts, giving up eight hits, two runs and two walks with nine strikeouts in six innings.

Atlanta closer Craig Kimbrel got the last three outs to earn his 35th save in 39 chances.

Starlin Castro, Rizzo and Baez, the nucleus of Theo Epstein’s rebuilding effort, drove in all four runs against the NL-leading Brewers. Castro and Chris Coghlan contributed three hits each.

Cubs starter Tsuyoshi Wada (2-1) was coasting until he was chased in the seventh, when he allowed consecutive home runs to Rickie Weeks and Martin Maldonado. Wada allowed two runs on five hits in 6 2-3 innings. He struck out five and walked one.

Hector Rondon pitched a scoreless ninth for his 16th save in 20 tries.

Lohse (11-7) allowed four runs on seven hits in three innings, and tweaked his right ankle during at at-bat.

Vargas (9-5) retired the final 23 batters he faced in only his third start since an emergency appendectomy. The left-hander also helped Kansas City bounce back from having an eight-game winning streak snapped and maintain a half-game lead over Detroit in the AL Central.

Salvador Perez drove in the Royals’ other run off Scott Kazmir (13-5), who lost to Kansas City for the second time in 10 days. He has won just once in 10 starts at Kauffman Stadium.

Limited to three hits through seven innings, Baltimore trailed 2-1 before Schoop tied it with a drive off Dellin Betances. Shawn Kelley (2-4) then gave up a single and a walk before Jones hit a shot into the bullpen area beyond the center-field wall.

As the ball dropped over the fence for his 23rd home run, Jones raised his right arm in triumph as he rounded first base.

Darren O’Day (4-1) worked the eighth and Zach Britton gave up a run in the ninth en route to his 25th save.

It was the eighth straight series win for the AL East-leading Orioles, who increased their margin over the fading third-place Yankees to eight games.

Archer (8-6) had his only two walks in the first three batters he faced. But the hard-throwing right-hander got out of the inning when Alex Rios went down swinging, the first of six consecutive Rangers he struck out.

It was Archer’s third career game with at least 10 strikeouts, and two have come against the Rangers. He struck out 11 against Texas in a home game on Sept. 8, 2012, in his third career start.

Joyce homered in the first, an inning before Sean Rodriguez and Brandon Guyer hit two-run shots off righty Miles Mikolas (1-5).

The Tigers, who are suddenly facing adversity amid mounting injuries, rallied from a 4-1 deficit on a night when they had to send Buck Farmer to the mound to make his major league debut.

Castellanos put Detroit ahead 5-4 with a solo homer off Vance Worley (5-2) in the sixth. Victor Martinez added a two-run single in the seventh.