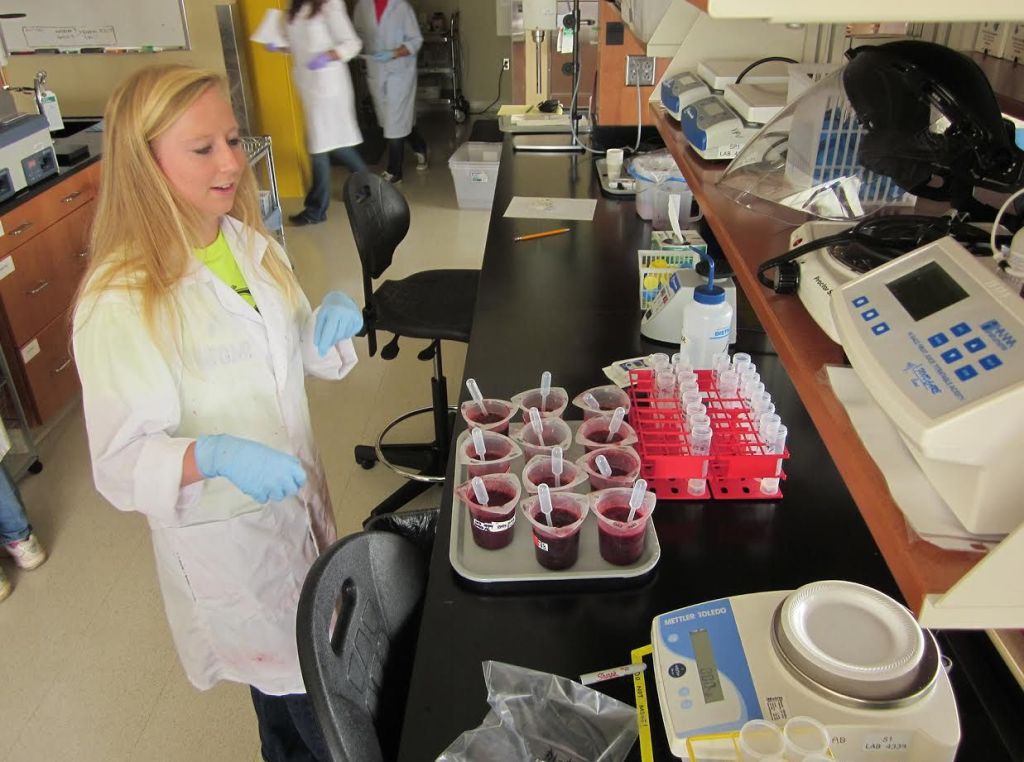 Again this summer, five Catawba College students interning at the North Carolina Research Campus in Kannapolis helped to gather and organize data in a project that will ultimately result in a knowledge database to help improve human nutrition. The Research Campus is a collaborative of 20 corporate, academic, technology and healthcare partners working to improve human health and nutrition.
These five students are continuing collaborative research that began in summer 2013 as part of the Plant Pathways Elucidation Project (P2EP), a program that brought together university scientists, industry professionals and students from a variety of North Carolina colleges and universities.
The primary goal of P2EP is to identify and map plant pathways in food crops and better understand how they function with a goal of better crops and better nutrition.
The Catawba interns each focused on different fruits or vegetables. Biology majors Allison Baucom and Ashton Pryor, both of Salisbury, are focusing on small fruits, including berries. Maria Gurski, a chemistry major from Norristown, Pa., studied blueberries, while broccoli was the focus for chemistry major Fernando Guerrero of Kannapolis and biology major Titus Hunt of Lexington.
The internships took some of the students into the field to pick their products at Piedmont Research Station in Salisbury, then to the lab, where they flash-froze or pureed their fruits or vegetables to extract and test the attributes of and nutrients in them. In the lab, some of the interns examined the sugar content, acidity and lycopene content of their assigned fruit or vegetable.
Later, students were able to input the lab results into a computer to create genome linkage maps for each species. Scientists and researchers will eventually be able to see the genome sequence for each fruit or vegetable analyzed. This genomic library will help farmers, allowing them to choose parent plants for breeding that possess certain desirable attributes.
Titus Hunt explained that his work with broccoli “looked at organic and natural solutions.”
“We’re trying to find not just the best product, but one without preservatives, one that can result from natural breeding,” Hunt said. “Biology was an end goal for me when I came to Catawba because I wanted to be a doctor, but I didn’t really think about its effects on life. Here, we’re actually looking into biology and its effect on our future as a species.”
The enlightenment that Hunt has received due to his internship has made him rethink his career direction. “Now, I’m actually looking into graduate school for nutrition and this (internship) was a way for me to get a taste of what is to come.”
Hunt and Guerrero, who spent time entering and manipulating genetic data in specialized computer programs, admit they were a bit overwhelmed with the computer mapping when they first arrived. However, talking to students from other institutions who shared their feelings and doing tutorials on the computer software helped put them at ease. Their goal became to do good work so that if their supervising scientists publish scientific papers using their inputted data, their names can be included on that paper.
Maria Gurski, who tested fruit gels in the lab that she had made from pureed blueberries, admitted that she too was initially overwhelmed with the subject matter. “I didn’t know about any genetics except simple things. I studied to catch up,” she confided.
Gurski most valued the laboratory time that her internship provided. She contrasted the finite time she was allowed with her labs on Catawba’s campus and the time she was allowed at the Research Campus. “Here you can try again if you screw up and learn why you screwed up,” she said, noting her experience was great preparation for her planned studies in pharmacy school.
Allison Baucom spent time testing berry purees for a variety of different content levels — everything from sugars to lycopenes and phenolics. Her internship took her from the field picking fruit to the lab where she tested it, and like Gurski’s internship, she believes the experience will serve her well as she pursues veterinary school after graduation from Catawba.
Baucom and the other student interns created scientific posters to explain the results of their research and presented their findings during an Aug. 5 Research Symposium held at the Research Campus. Her poster concerned the health benefits of raspberries.
Ashton Pryor, a Noyce Scholar at Catawba, also tested different fruit purees during his internship and noted that the experience had provided what he had expected — fieldwork and lab work. He noted the impact of climate and soil additives, such as an Epsom salt solution, had on plants and their fruits. His scientific poster presentation concerned raspberry shelf life in North Carolina.
Dr. Connie Lowery, associate professor and chair of biology at Catawba, said she was pleased with the students’ work and their exposure to new concepts and ideas.
“An internship is one of the most important and valuable experiences that a student can have during his or her college career,” Lowery said. “The students also build a network of peers and contacts which can be valuable when applying for graduate or professional school or even a job after graduation. I continue to be proud of our students and the work they have contributed to this important ongoing project.”
During the P2EP Research Symposium, the interns learned just how fruitful two years of work on the knowledge base project had been. Jeremy Jay, a Ph.D. student at UNC-Charlotte’s Bioinformatics Service Division at the Research Campus who oversaw some of the undergraduate interns, reported that to date, 16 million unique identifiers and 433 million pairs of links had been made to entries in the knowledge base. For more information on P2EP, visit www.P2EP.org.