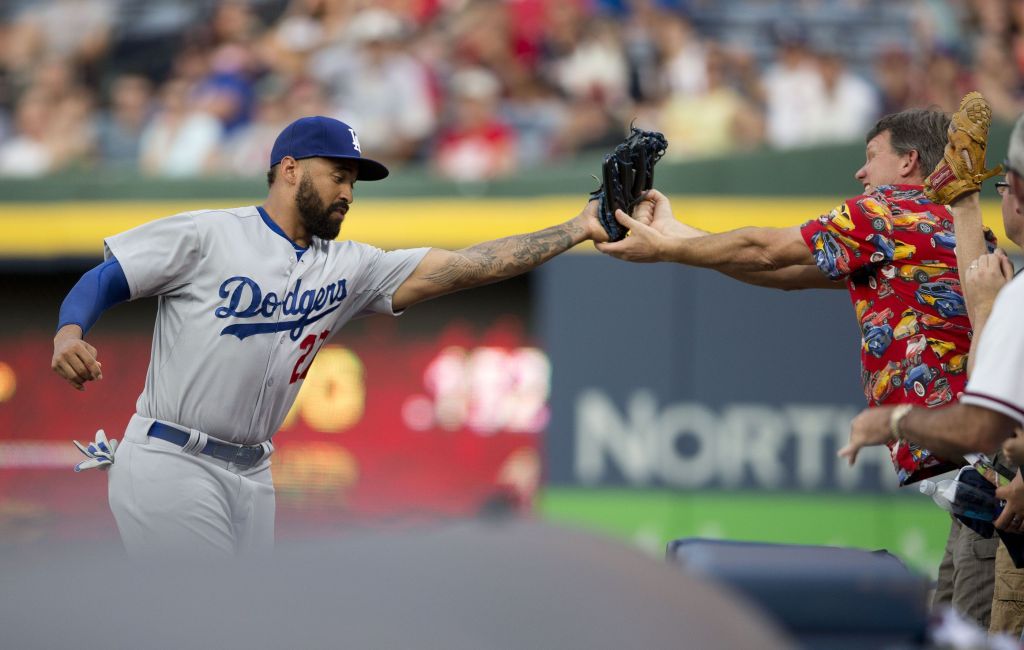 ATLANTA — Dan Haren pitched six solid innings and sparked the go-ahead rally with a single, leading the Los Angeles Dodgers to another win over the skidding Atlanta Braves, 4-2 on Tuesday night.
Haren (10-9) surrendered a fourth-inning homer to B.J. Upton that put the Braves up 2-1, but the light-hitting pitcher came through with a one-out single to right in the fifth. Carl Crawford followed with a double, and Haren scored the tying run on Yasiel Puig’s grounder to third.
Matt Kemp hit a little blooper to right that just got over the glove of second baseman Tommy La Stella, bringing home Crawford.
That was enough for the Dodgers.
Mike Minor (4-8) matched his longest outing of the past month after being skipped his previous turn in the rotation. The Atlanta lefty went 6 2-3 innings, allowing eight hits and all three Dodgers run.
Kenley Jansen earned his 33rd save.
The Braves lost for the 11th time in their last 13 games, including two straight to the Dodgers.
With Los Angeles up 1-0, Upton drove his ninth homer of the season deep into left-field seats. It was his sixth career homer off the Dodgers right-hander; Upton has no more than three homers against anyone else.
Minor came into the game with a 5.42 ERA, having surrendered nine hits, two homers and five runs in his most recent start Aug. 1, a 10-1 loss at San Diego.
TRAINER’S ROOM
Dodgers: 2B Dee Gordon didn’t start because manager Don Mattingly wants to make sure the slender infielder doesn’t get too worn down in the heat of summer. “Trying to keep him at 170 (pounds), basically,” Mattingly said before the game. Gordon struck out as a pinch hitter in the seventh.
Braves: SS Andrelton Simmons took grounders before the game and continues to show improvement from a sprained left ankle. But he missed his sixth straight game, with Emilio Bonifacio starting in his place. La Stella, who had to leave Monday’s game in the second inning, was back in the lineup after his right hamstring cramped because of dehydration.
UP NEXT
Dodgers: LHP Hyun-Jin Ryu (13-5) goes for his fifth straight win. Since July 13, he has allowed only seven earned runs in 33 innings (1.91 ERA) while limiting opposing hitters to a .198 average. He has 32 strikeouts and only four walks during his winning streak.
Braves: Ervin Santana (11-6) will also be looking to stretch his winning streak to five in a row. He has worked at least six innings in his last 13 starts, and hasn’t gone less than five innings in any start this season.
—