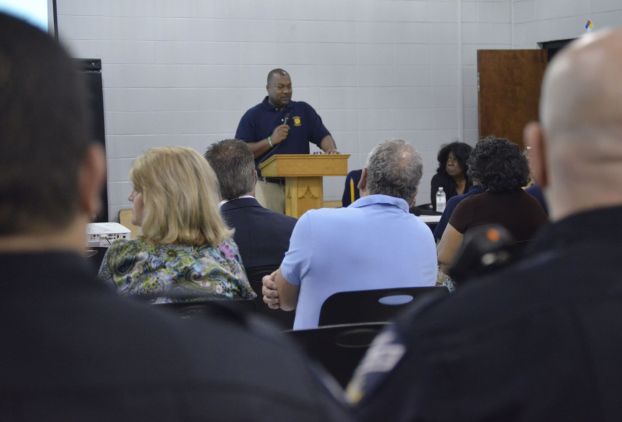 Although there were few youth sitting in attendance at a community meeting held at Miller Recreation Center, youth involvement was the topic of concern for much of the adults who attended.
Monday’s meeting was a follow-up to a meeting held June 23 to address crime in the West End and other parts of the city. During that meeting, organizers, which included West End Pride Organization and West End Community Organization and The Chamber (not the Rowan County Chamber of Commerce), asked residents to tell them what issues they felt were important in their community.
One organizer, Ken Hardin, said before the meeting began, he hoped people would take the ideas shared at the meeting and share it with their communities.
The meeting was not as heavily attended as previous open forums.
However, the number of people did not deter organizers from their goal, which was to share survey results and come up with tangible solutions.
During the July meeting, attendees answered a series of questions about their communities. The answers were compiled and discussed Monday.
The top issues identified from those who participated in a survey were drugs, gangs, and gun violence.
Organizers identified five points of interest based on the survey results:
• Residents don’t feel safe in Salisbury, nor do they feel have a high quality of life because of the issues identified.
• Residents want police to be more visible.
• Residents want police and city leaders to culturally understand and respect them.
• Residents want their neighborhoods to look clean and beautiful. They want to partner with the city to achieve it.
According to the data collected, almost everyone surveyed mentioned youth and there not being enough for them to do in the communities. One person surveyed said although they live in an area where there is not a lot of violence they did feel as though there was a need to invest in the youth.
Esther Atkins told those gathered she believed the youth should be part of the plans. She did suggest collaborating with colleges, student organizations and other area organizations already in place to help engage youth.
She also said less emphasis should not be placed on the arts and sciences.
Not all children excel in sports, she said.
She said there are some drug dealers who have excellent business sense and why not redirect that talent into something positive and employ them.
Mayor Paul Woodson also challenged business owners to provide the youth in the community with jobs.
Local insurance agent Greg Edds said the community should look at nontraditional means of education. For instance get children involved in culinary arts.
“This community has a tremendous amount of power,” he said.
Tom Speaks also said providing the youth with something to do would engage them. He suggested a talent show of sorts. He added at the end of the friendly competition provide speakers who could really provide some positive reinforcement. He suggested Salisbury look at similar cities that have tackled these same issues and succeeded in making a difference.
Atkins asked during the meeting where the community could get crime statistics and could they be made available. Police Chief Rory Collins said his department is working on gathering some crime stats. Collins went on further to say he has a police planner within the department whose job is to handle crime statistics.
Hardin said one of the solutions given could be to provide a place for the youth to learn a trade or skill. He wasn’t alone in his thinking, others also suggested providing a place to teach youth something not found in a traditional school setting.
Several people mentioned the Salisbury Police Athletic League. Some people said they weren’t aware the athletic league still existed and others said it’s going, but needs more support from the community. The athletic league teaches valuable life lessons like decision making and provides an outlet to teach youth 5 to 12 how to play football.
Someone suggested invigorating neighborhood watch groups and possibly partner with churches and other organizations.
Organizers will meet in 90 days with residents to see if those suggestions that were made at Monday’s meeting have been carried out in their respective communities.
Contact reporter Shavonne Potts at 704-797-4253.