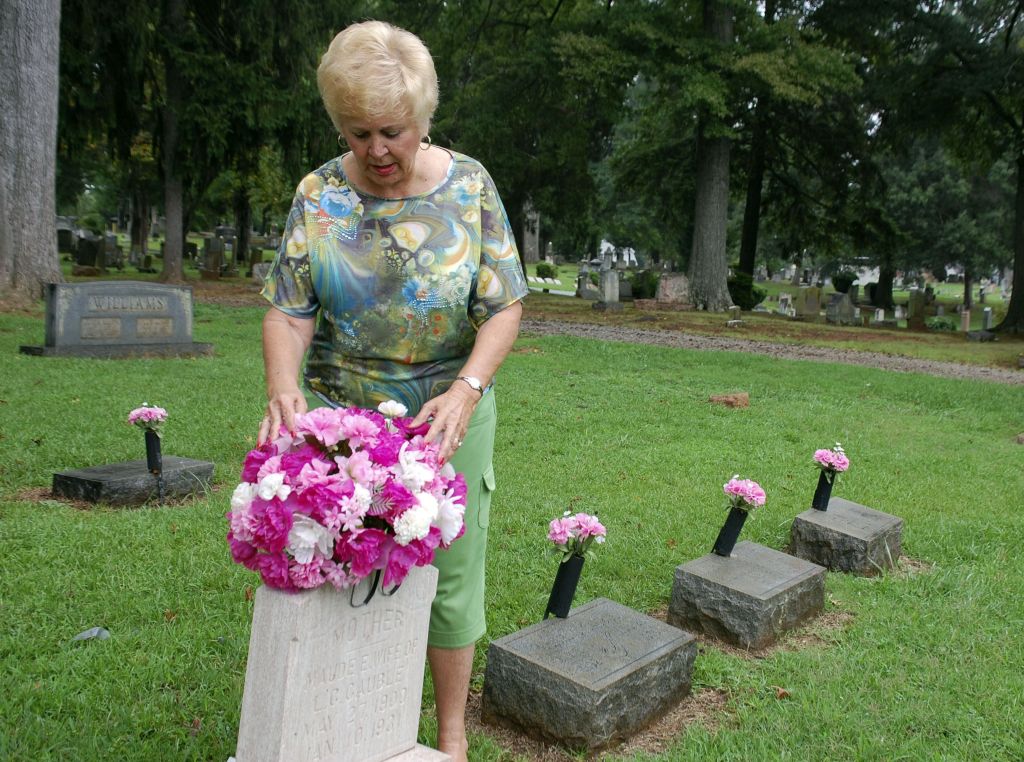 SALISBURY — This story has been buried for too long.

By the time it’s over, you’ll be confused and crying for a family genealogy scorecard, but the best summary is this:

“Now what are the odds of this happening?” asks Penny Sides, whose grandmother, Maude Newsome Cauble, is buried at the first headstone in the line, if you were looking at it left to right.

Maude died of tuberculosis in 1931 when she was only 30 years old. She was married for almost a dozen years to Louie Cauble (Penny’s grandfather), the next headstone in line. Louie lived 44 more years, and on April 25, 1936, he married Dora Howard Causey, the third gravestone.

Some incredible coincidences are at work here. You see, Dora had purchased three plots in Chestnut Hill long before she knew her second husband, Louie Cauble.

It took almost 25 years into the marriage of Louie and Dora before family members realized when Dora was visiting the graves of her first husband and their young daughter, she was right beside the Cauble family plot.

In fact, where her grave would be someday was next to where Louie’s predetermined spot was, next to his first wife.

It happened entirely by chance. Again, Penny Sides asks, what are the odds?

Sides offers several sad notes to the stories of both Dora and Louie.

Dora was pregnant with her first child when Joe Causey died in 1925. The girl wasn’t born until April 26, 1926, then she died in July 1929, not long after her third birthday. Her little gravestone is just south of Joe’s.

Penny Sides feels a close spiritual connection to Maude N. Cauble, a grandmother she never knew. Sides says Maude was a “bound” girl until she was 18, which she thinks meant Maude was legally under someone else’s guardianship, not her parents.

Maude married Louie when she was 19, and by all accounts, their lives together were difficult. They had three daughters together: Mildred, Glendina and Juanita, and they were only about 12, 9 and 8 when their mother contracted the tuberculosis that would kill her.

“It’s a pitiful story,” Sides says. “… Can you imagine what went through the poor girl’s mind?”

Mildred Cauble Gerock was Penny’s mom. Mildred, Glendina and Juanita stayed close the rest of their lives, and Louie looked after them until they were old enough to go out on their own.

“Life was not easy for those girls, but he did raise them,” Penny says.

Today, Penny takes on the responsibility every spring and Christmas of putting artificial flowers on all 10 graves — the 7 from the Cauble family plot and the three from Dora’s side.

“They’re my people, and I want other people to know they are not forgotten,” Sides says.

She gives special attention to Maude’s headstone because Maude seemed to have such a tough, short life.

“I hope she’s up in heaven and sees I do that for her,” Sides says.

Benjamin D. Cauble, Penny’s great-grandfather — was a 21-year-old guard at the Salisbury Confederate Prison. Before his death in 1922, Benjamin Cauble bought the seven lots in Chestnut Hill for his family. He and his wife, Amanda, had five children.

But the Caubles represented by those seven plots are Benjamin and Amanda; Louie and Maude; Juanita and her husband, Tip Williams; and Louie’s brother, Harvey Cauble.

Penny Sides says she will be buried at Rowan Memorial Park, where her parents, Freeman and Mildred Gerock, are entombed.

“I already have my condominium,” she says.

In the past five weeks, Penny has learned worlds of new information about the Gerock side of her family. She and Terry traveled last week to Maysville in eastern North Carolina, where she found gravestones for her grandfather, great-grandfather and great-great grandfather, dating back to early American days.

One of her ancestors, Sides learned, was friends with President George Washington. She made her arm sore with all the gravestone rubbings she performed.

The Chestnut Hill Cemetery story cannot be closed without mentioning one more coincidence.

Penny Sides remembers the turn into Chestnut Hill on the day of Larry’s funeral and how surprised she was when the procession seemed to be heading directly toward the Cauble family plot.

She knew no vacant plots remained there, but the mourners stopped on the road right beside it.

Larry’s grandparents, Burton B. and Hattie Daniel Brown, were buried in a family plot adjacent to the Caubles, and that’s where Larry’s final resting place is.

When Kathy dies, she will lie close to her mother. Again, it all happened by chance.

“How weird is that?” Penny Sides asks.