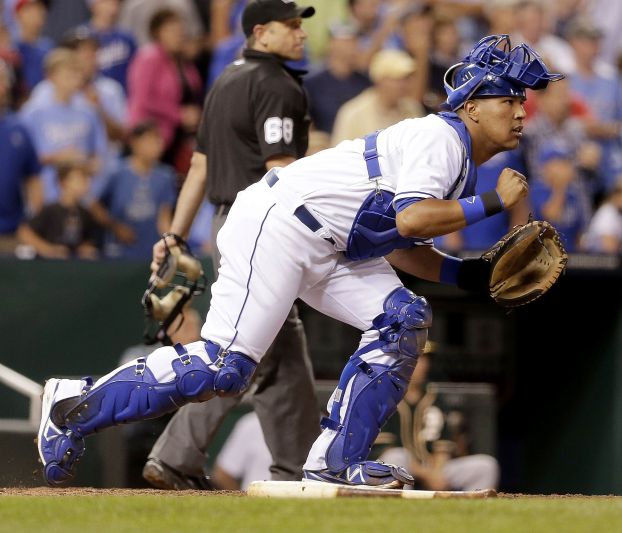 The victory, coupled with a loss by Detroit in Pittsburgh, gave the long-suffering Royals a division lead at the latest point in a season since 2003.

Alcides Escobar drove in a run in the second inning before delivering a two-out single off Gray (12-6) in the seventh, putting Kansas City in front.

PITTSBURGH (AP) — Travis Snider hit two home runs and Starling Marte had a bases-loaded triple as the Pirates coasted to a win against the Tigers.

The loss, coupled with Kansas City’s 3-2 win over Oakland, dropped the Tigers a half-game behind the now first-place Royals in the AL Central Division.

Justin Verlander (10-11) left after one inning with right shoulder soreness. He gave up five runs — four earned — on four hits. He walked two and struck out three.

Martin hit his sixth home run of the year in the sixth inning, and Ike Davis followed with his eighth.

ARLINGTON, Texas (AP) — Drew Smyly allowed three hits in his first win since the David Price trade, Matt Joyce had a two-run single and the Rays beat the Rangers.

Smyly (7-10) struck out nine in a career-high 7 2-3 innings to beat the Rangers for the second time this season.

CHICAGO (AP) — Yovani Gallardo pitched seven sparkling innings and Khris Davis had a tiebreaking RBI double, leading the Brewers to a victory over the Cubs.

Gallardo bounced back nicely from a sluggish outing against San Francisco, allowing one run and six hits while improving to 9-3 with a 3.00 ERA in 18 career starts against Chicago.

Coming off his worst start of the year, Jake Arrieta (6-4) gave up two runs and five hits in 7 1-3 innings for the Cubs.

ATLANTA (AP) — Kevin Correia won in his debut with the Dodgers, outpitching All-Star Julio Teheran and leading Los Angeles over the slumping Braves.

Los Angeles has won four of six to increase its NL West lead to five games over idle San Francisco. The Braves have dropped 10 of 12 and fallen four games behind NL East-leading Washington.

Correia was tied for the major league lead in losses with a 5-13 record when he was traded from Minnesota to the Dodgers on Saturday. He excelled for Los Angeles, giving up one run and four hits in six innings, striking out five and walking one.

Carl Crawford got three hits and drove in two runs for the Dodgers.

Steve Cishek escaped the ninth to record his 30th save in 33 chances. With two outs, Cishek allowed an RBI triple by Kolten Wong and an RBI single by Matt Holliday allowing the Cardinals to pull to 6-5. Cishek struck out Matt Adams to end the game.

Jon Jay hit a two-run home run, Holliday had four hits, and Shelby Miller (8-9) allowed five runs in five innings for the Cardinals, who have lost three of four.

Darin Ruf hit a two-run shot for the last-place Phillies.

Recker was in an 0-for-18 skid when he connected off reliever Justin De Fratus.

HOUSTON (AP) — Joe Mauer had two hits in his return from the disabled list, including a go-ahead RBI single in the ninth inning, to help the Twins to a win over the Astros.

A pair of walks by Josh Fields (2-5) left runners at first and second with two outs in the ninth when Mauer’s groundball single to left field scored Jordan Schafer. Brian Dozier also scored on the play.

Brian Duensing (3-2) got the last two outs of the eighth inning for the win.

Chris Carter and Jose Altuve both had solo homers for Houston and Jake Marisnick had a career-high four hits.

Tommy Milone allowed eight hits and two runs in his debut with the Twins after being traded from Oakland for Sam Fuld on July 31.

Twelve inducted in Hall of Fame