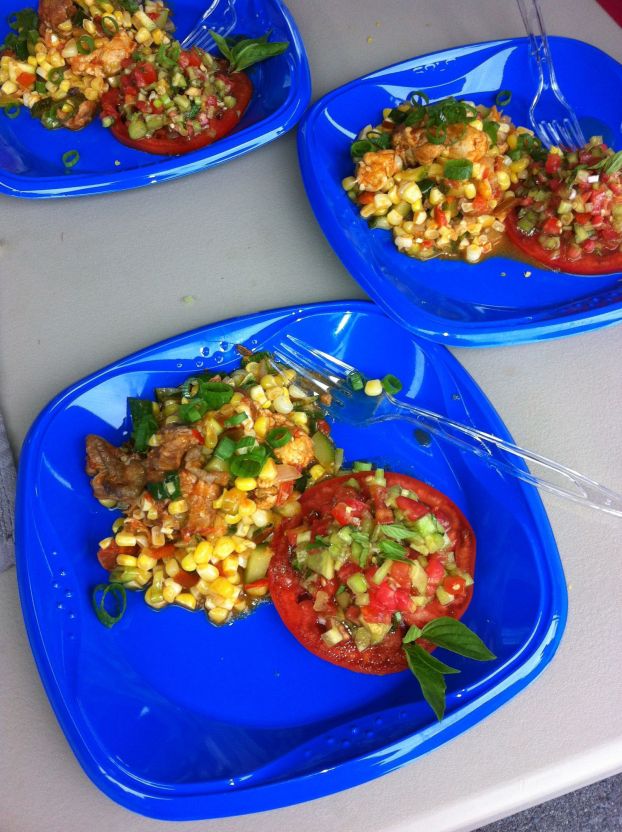 It was a busy, loud and frantic Market Chef competition on Saturday, with three chefs and their assistants vying for the win.

Becky and Autumn Ulrich, winners of the first competition on July 19, were back, along with Christine Wilson, who chose Quinn Scarvey, the first round’s second place winner, as her assistant, and Penny Collins and Laura Vella, both of whom have “done some chefing,” as Laura pointed out.

The secret ingredients for this round were guinea fowl from Yorke Reynolds and bitter melon from Lee Ly.

You could see some surprise on the contestants’ faces. They also had to use three of these four ingredients: eggplant, tomatoes, hot and sweet peppers or mustard.

There was a mad grab for ingredients, then contestants had $10 and 15 minutes to shop. Christine and Quinn picked up purple okra and Thai basil. Penny and Laura got corn, scallions, zucchini, onion and basil, and Becky and Autumn got squash and basil.

Bitter melon was new to most of them. They’d been given a hint to think Asian before choosing their 10 pantry items, so they brought coconut milk, soy sauce, ginger, vinegars and rice.

Autumn started slicing the bitter melon and said, “It tastes disgusting.” They planned to blanch the melon to get the bitterness out.

Laura skinned and boned Penny’s guinea with ease using a super sharp knife and giving a lesson to those watching.

Christine was having trouble taking apart her guinea, Slicing went on at all the tables, as eggplant, tomatoes, squash, pepper and onions all got broken down. Penny started taking corn off the cob.

As happened the first time, not all the cooking devices worked. A hot plate was not, and the two-sided grill wasn’t heating fast enough. There was a scramble at the cooking tent and Becky and Autumn had to modify their plans.

They had wanted to marinate the bird but were having trouble cutting it up. They were going to grill it and stir fry the vegetables, but the grill wasn’t heating and Laura and Penny were already using the wok to do their dish, which emanated a spicy and delicious fragrance.

Autumn and Becky decided to blanch their melon. They had planned to buy garlic, but there was none at the market, so they bought white wine and garlic jelly from Dover Vineyards.

Christine and Quinn had gotten a hint that stewing the bitter melon was one way to tame it, so they worked on a stew of guinea, tomato, melon and zucchini.

Penny and Laura opted not to cook their bitter melon, instead dicing it finely with tomatoes for a salad they would serve on a slice of tomato.

The grill finally started to heat, but Christine and Quinn grabbed it to do their okra and eggplant. Becky and Autumn looked a bit frustrated. Penny and Laura remained calm.

Penny and Laura’s salad had a dressing of salt, basil, lemon juice and balsamic vinegar.

And it began to rain. Mist turned into a shower, with umbrellas popping up and Cooperative Extension agents Toi Degree and Danelle Cutting worrying about power to the cookers.

The judges were Salisbury Mayor Pro Tem Maggie Blackwell, Angela Crowell and Yorke Reynolds, the market vendor who provided the guinea. Crowell is allergic to pepper and asked that no one use it.

Christine and Quinn’s rectangular pottery plates included jasmine rice as a base for the stew. The garnish of grilled okra stood out.

Becky and Autumn also used rice as a base on square, white plates.

With a call of three minutes, Penny and Laura were working on presentation, “Three minutes,” Laura said. “We could take a nap!”

Laura arranged the vegetables and guinea on one corner of the plate, the guinea stir-fry with corn, tomatoes, and scallions on the other. They missed pepper, but use pimenton, smoked paprika from Spain, which gave a peppery kick.

Becky and Autumn used ginger, soy, sesame oil and coconut milk to cook their dish, both kinds of pepper, squash, tomatoes and basil.

The judges walked by looking at the appearance and presentation. Then they went back to smell and taste, taking just a few bites from each.

Then a rather long wait began as the scores were tallied. Extension volunteers cleaned and dismantled the cooking tent; contestants cleaned their tables and put away ingredients, tents began to come down.

Finally, Cutting came back with the scores.

Becky and Autumn, last round’s winners, came in third with 156 points. They looked disappointed and a bit tired.

Christine and Quinn, were second, with 161 points. They jumped and hugged.

In first place were Penny and Laura with 185 points.

The second place winners got colorful peppers from the market, and the first place winners, who had experience with guinea, got a whole guinea.

Penny Collins moves on to round three on Sept. 6, which will focus on desserts.

By Susan Shinn For the Salisbury Post On Saturday, more than 60 volunteers worked to bring a dose of Raider... read more