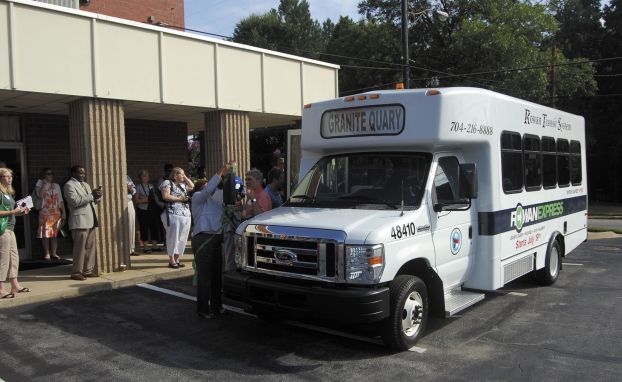 Rowan County will discontinue its Rowan Express East service Sept. 15 due to lack of funding and low ridership.
The Express service, which runs Monday through Friday, will be replaced with the countywide RITA service, which will serve the eastern Rowan area one day each week, currently slated for Fridays, Gary Price director of the Rowan Transit System, said Tuesday.
The Rowan Express service started with a route to China Grove and Landis in the southern end of the county and connecting Salisbury’s public transit to the CK Rider bus system in Kannapolis. The county established the eastern Rowan route when residents in that area expressed an interest, Price said.
But ridership on the eastern route — which runs seven daily loops with stops in Salisbury, Rockwell, Granite Quarry and Faith — has averaged only 26 a day last month, and only 16 a day in January.
“Ridership has not been what we had hoped for that,” Price said. “We were looking at some kind of service change anyway.”
Meanwhile, the route has lost its major source of funding. With a fare of only $1 per ride, Rowan Transit services are paid for mainly through grants with local matches, Price said, and the agency was using money for rural communities to operate the Rowan Express East service.
After the 2010 Census, the federal government now “designates that whole area the east route runs on as an urban area, and because we were using rural money, we can no longer fund it,” he said.
When it ceases Rowan Express East, the county will offer residents the service they had prior to it, the RITA, or Share-a-Ride system. That service used to run two days a week in each area, but funding cuts have forced the county to cut it to one day, Price said.
“At least they’ll have that to be able to go to the doctor, buy groceries, pay bills and things like that,” Price said.
The RITA fare is $2 per stop unless a rider is covered by Medicaid or the county can match a resident with a grant program to cover the cost. Price encourages residents to call about the grant programs, which are determined by factors such as age and disability.
For more information on available grants to help cover fares, call Rowan Transit at 704-216-8888. For more information on transit services, call or go to the department’s web site at www.rowantransit.com .