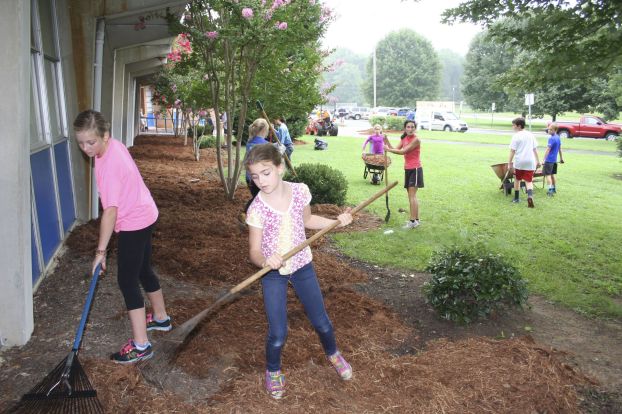 A little drizzle Sunday afternoon didn’t dampen the spirits of dozens of volunteers at Knox Middle School. Students, parents, administrators and community members worked together during the first Knox Beautification Day.
A second event is set for 8 a.m. to noon this Saturday, Aug. 16.
Volunteers spread mulch — a lot of mulch — and spiffed up gardens in the courtyards. Jason Sparger, parent of sixth-grader Emma, brought his front-end loader, which sped up the process enormously. David Kafitz, who lives just across the street with wife Paula, unloaded mulch from a cart attached to the back of his zero-turn radius lawnmower.
Co-principal Michael Waiksnis said he didn’t mind the cloudy day. With him were his wife and their two children, as well as his in-laws.
“The weather’s actually perfect,” Waiksnis said. “It’s not too hot. We’re doing all landscaping today. Whatever we don’t get finished today, we’ll do Saturday. The pressure cleaning will have to wait.”
Another truckload of mulch will be delivered, too.
In the courtyard across from the main office, Paula Kafitz was helping put down weed barrier and mulch with her two granddaughters, Emma and Kate, who live near Monroe.
“That’s good teamwork,” she said, watching the girls.
Also putting down weed barrier were Kelly Alexander, her daughter Maggie and Meredith Burton. Maggie and Meredith are rising sixth-graders at Knox. The three worked together to lift heavy planters so that they could secure the barrier underneath.
“We wanted to make the school look nice and help out with everything,” Meredith said.
Maggie attended the recent Crossover Academy for rising sixth-graders.
“I think it’s gonna be a good experience for her,” said Alexander, whose older daughter also attended Knox. “We look forward to the new principals and appreciate all the hard work they’ve put in so far.”
The entire administrative team was on hand: Co-principals Waiksnis and Latoya Dixon, and Tonya German and Tyrone Freeman, assistant principals.
By early afternoon, German was dirty and sweaty. She did not care.
“It’s just good to look around and see all the different people representing the community as a whole,” she said. “Look at the teamwork!”
German recruited her husband, Daniel, as well as her older daughter, Caylynn Westberg, to work. Younger daughter Bella enjoyed tooling around campus on her pink bicycle.
Elizabeth Derrick came because she, as well as her two sons, all went to Knox. Working with her was Kathy Rusher, whose two older children went through Knox and whose daughter Lillie is a rising sixth-grader there.
Out front, Meredith’s mom Melanie was spreading mulch at the school’s main entrance.
She came to help, she said, “out of a desire to improve Knox, and help fulfill that dream that the principals have. We are taking pride in our school.”
The landscaping, she said, would increase the school’s “curb appeal.”
Eighth-graders Blake Clark and David Holden, along with sixth-graders Vance Honeycutt and Emma Sparger and many other students, used wheelbarrows to help ferry mulch from the ever-shrinking pile.
Waiksnis said earlier he wanted students to have a “Wow!” experience on the first day of school, and by the end of the afternoon, the group was well on its way to accomplishing just that.
If you’d like to help with the second beautification day this Saturday, call Knox Middle School at 704-633-2922.
Freelance writer Susan Shinn lives in Salisbury.