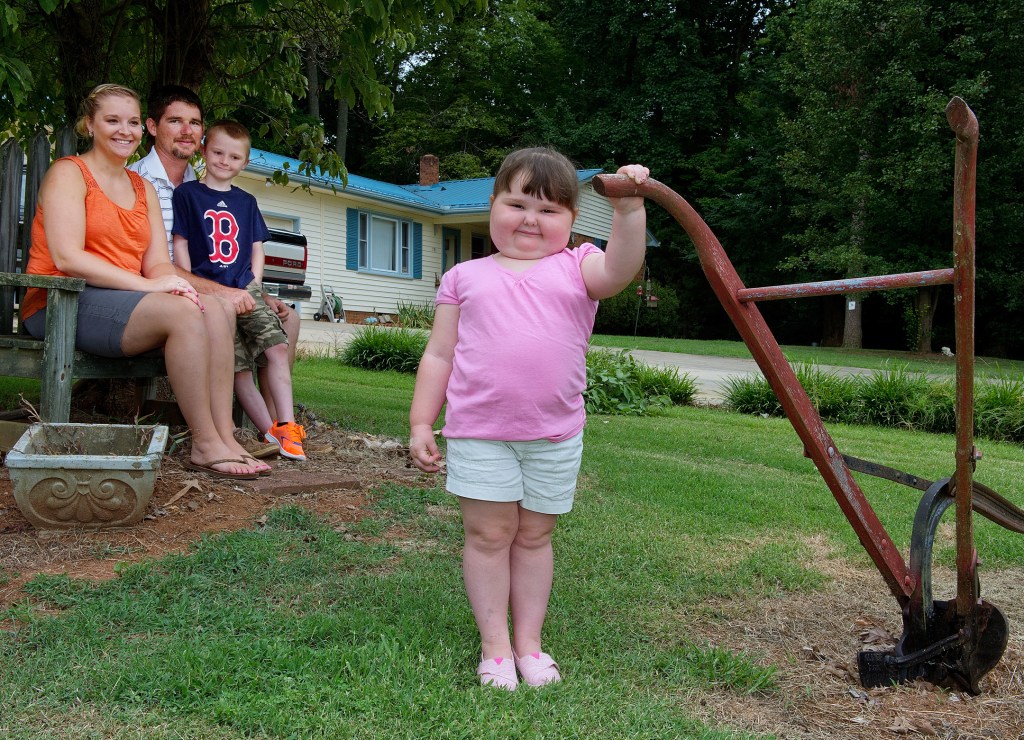 LEXINGTON (AP) — The unique name suits her. Rylee is a fun-loving, independent 4-year-old who manages a smile even through her taxing times.
“It’s a little quirky and different. It matches her personality,” suggests her mother, Jessica Lambeth. “She’s pretty shy until she gets to know you. But, she loves to dance and tell stories. She has a very strong personality.”
Rylee also has a rare autoimmune disease that severely affected her motor skills, and subsequent treatments have caused her to swell excessively, especially her face.
For three months she was being treated with steroids for what doctors thought was ataxia, or acute disseminated encephalomyelitis, which impacts the central nervous system.
At one point Rylee was unable to feed herself or walk.
With all aspects of her dilemma being atypical, it seemed fitting that the budding young gymnast was initially misdiagnosed, and oddly enough it would be chemotherapy treatments that are helping her to fully recover.
“She is slowly going back to Rylee, her old self,” says her mom.
There are plans for her to continue with gymnastics again soon and return to preschool in a few weeks. She will turn 5 on Aug. 13.
The Lexington family’s medical saga began in December of last year when Rylee decided to do homework.
She tried to pick up a pencil and write her name, but she couldn’t seem to hold it, her mother describes. “The next day I noticed she was a little wobbly when she tried to walk and fell out of our car getting out.”
After visits to her family physician, Rylee was eventually referred to Brenner Children’s Hospital in Winston-Salem, then last March to Boston Children’s Hospital where Lambeth credits Dr. Leslie Benson, a neurology specialist, with the correct diagnosis and treatments that are effective.
Benson concluded that Rylee is afflicted with small vessel central nervous system vasculitis, a complex malady that causes her immune system to attack her body and the small vessels in her brain to swell.
On their first trip to Boston in March, the Lambeths planned to stay just three days for a couple of tests. They wound up staying 13 days for even more testing on Rylee.
There was a second trip, this one for three days in June, to talk about results of the tests and look at MRIs.
“We’ll make another trip in October,” Lambeth notes. “We’re probably on a two-year journey.”
Rylee continues to take low doses of steroids because doctors are afraid her body may go into shock if the injections are stopped abruptly. She is being slowly weened from those treatments.
She will continue her chemotherapy, which serves to reduce the swelling. Eventually, she will go from the IV treatments to a pill.
Meanwhile, Rylee tolerates the IV and needles in her arm to withdraw blood for testing, like a champ, according to her mother.
“She’s a trooper,” says Lambeth, 27. “She’s definitely fussy sometimes, but she goes every two weeks for blood work. She stays strong, whatever is being done, and afterwards she’s pretty proud of herself.
“Whenever she stays in the hospital or taking a trip to Boston, she seems to find the good in everything situation she’s put in.”
Rylee has a strong support system at home. In addition to her mom and dad, Robert Lambeth, 30, her big brother, Bryson, 8, also becomes involved.
“He’s amazing,” Lambeth says. “He does everything he can to make her life easier.”
The family as a unit has also had financial support from friends, family and community.
A silent auction and benefit motorcycle ride in Lincolnton has been held, and Lambeth’s boss at Tumble Tots held a yard sale in May.
“We’ve been super-blessed,” Lambeth said. “We’re very thankful.”
The auction generated some $4,000, and the motorcycle ride more than $2,000.
Expenses for a third trip to Boston Children’s Hospital have already been secured.
However, some $36,000 in bills are pending.
“The medical institutions are working with us, and we’re doing what we can. The community has truly been so helpful.”

For Freeze, trip let him ‘see, hear, feel and…