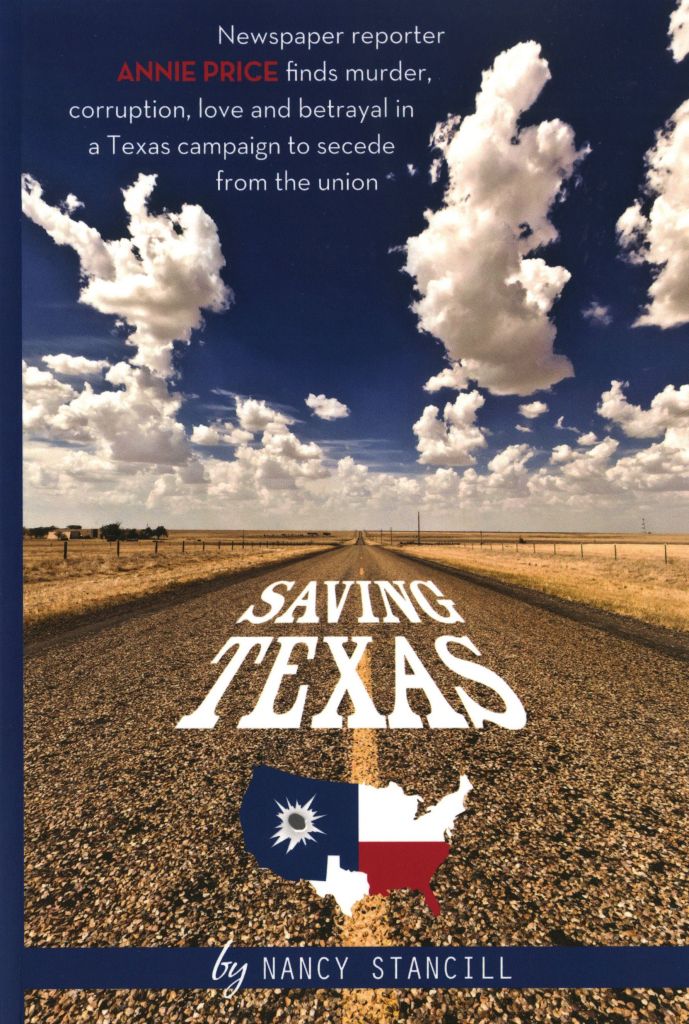 Nancy Stancill wrote her first novel, “Saving Texas,” because she wanted to portray journalism as it is now, full of angst and stress, and she wanted to look back on its glory days.

Her story is a thriller about a newspaper reporter covering a corrupt campaign in Texas that involves secession from the United States. Stancill handles it well; she spent 38 years in journalism, including time at the Houston Chronicle and the Charlotte Observer. She covered just about every beat, but her favorite was investigative journalism.

At the Observer, she worked on a project about the inequities of divorce, stories that prompted the legislature to change divorce laws so they were more fair towards women. She worked on a lot of other big stories, but she’s out of the business now, a victim of layoffs in 2009.

It worked out OK. Her husband was assigned to London for three years. When they got back in 2012, she got serious about publishing the book.

Her heroine, Annie Price, is a 36-year-old veteran journalist who wants nothing more than to be chosen for the investigative reporter team. Annie has a little problem with her drinking and with her love life. Stancill, in contrast, has been married to the same man since she was in her 20s and she doesn’t drink much.

Stancill’s story is a remembrance of the heyday of investigative journalism in the 80s and 90s and a cautionary tale of where journalism is today with its buyouts and down-sizing.

In the book, Annie’s paper, the Houston Times, is sold by the family who has owned it for decades to a group called McKnight Publishing. The inside joke is one journalists get — she’s talking about McClatchy buying the Charlotte Observer from Knight-Ridder.

Back to the fiction. She remembered Rick Perry’s comments, something about if Texas didn’t like what was going on in the federal government, it could always secede. “That got me to thinking, what if?

“I wanted a secessionist candidate as the main focus of the story, and the people behind him.” She describes gubernatorial candidate Tom Marr as wrong-headed but decent. His friends, Dan Riggins and Ed Gonzales, are just wrong, “nasty and evil.” She had a good time piecing it together. “I got to write about a few murders, some heavy corruption, a love triangle. It’s the kind of book I enjoy reading.

“Even though it is a thriller with murders and action, it has a serious point behind it. A lot of people out there in Texas and other places talk about seceding or being a separatist organization and I think it’s a very bad idea. It happened in Texas because it’s like a whole other country anyway and it was a republic for 10 years, but it’s not the right idea.”

Stancil loves West Texas, its landscapes, its isolation. She was born in Tennessee, graduated from UNC-Chapel Hill, married in Virginia and ended up working in Charlotte. “I think my two favorite states are Texas and North Carolina.”

Her father was an editor and publisher in Virginia. When he died, the family set up a fellowship that would send a reporter from a small newspaper to the Investigative Reporters & Editors conference.

Her character, Annie, is triumphant in the end. “She exposes some of the truth despite problems in the newsroom. … She goes about her work kind of the way I did. She’s very intense, always looking for something new, a new challenge. I had a little bit of fun with her. She’s 5 foot 11 and a half. I’m also tall and I found that an advantage in reporting.”

Stancill liked doing dialogue, but she liked the action, too. “This is the first time I’ve written fiction.” She says everyone should have the chance to pursue his or her dreams.

Stancil worked on the novel while in London, then picked up Writers’ Market and sent out 60-100 query letters. “Why not?” she says. She got a response from Black Rose Writing, a small press in Texas, and the book has been out since October. Now Stancill is doing the hard part, promoting it.

It’s done pretty well in Texas, and pretty well in the Charlotte area. “I’ve gotten some good reviews online.” Still, marketing yourself is hard, Stancill says. She’s going back to school to get a master’s of fine arts in creative writing.

She loves having the book in her hand, though she uses e-readers, too. “My original thought was to write a trilogy of Annie and the newsroom. I’m on the second book now, in the middle of it. And I’m not sure if I’ll wrap it up in two or three books. Annie is a little older, a little wiser, a little more careful with her love interests. She’s an editor now, but still loves reporting. It has some fun characters. There’s a strip club mogul in it, but I don’t want to give it away.”

Prepare your lines, songs and dance steps for upcoming…