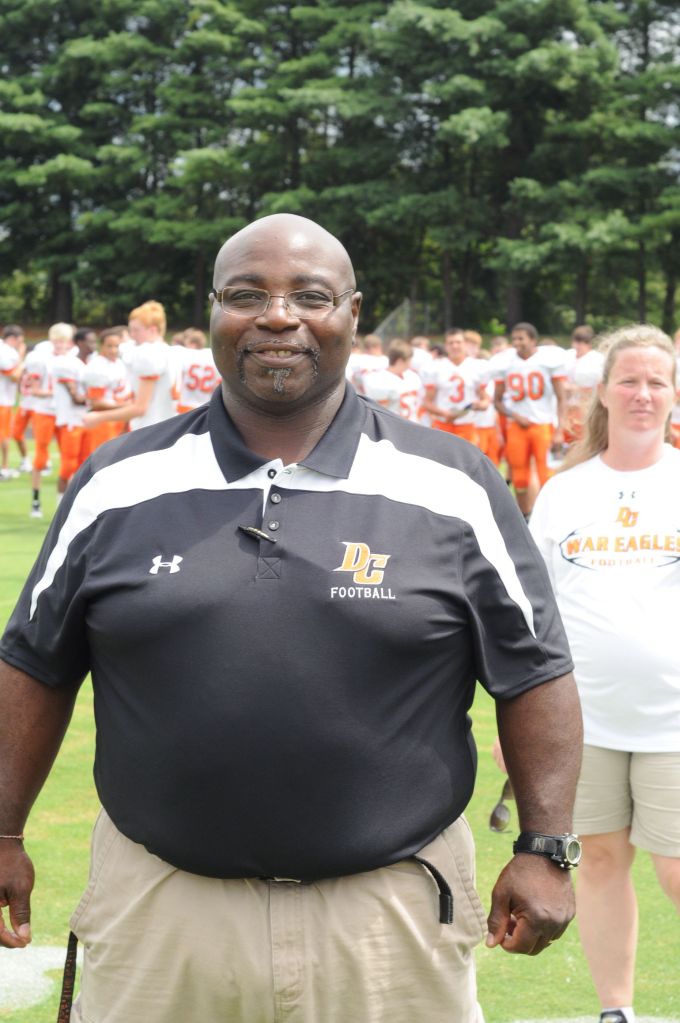 MOCKSVILLE — Davie County football struggled to 4-7 in 2013, just three years after playing in the 4A state championship game.
That wasn’t the scenario coach Devore Holman dreamed about when he took charge at Davie prior to last season, but Holman, who learned much of his football as a defensive lineman for Mike Carter-coached Davie teams, is resilient. He expects the program he leads to b resilient as well.
Holman uses the phrase “The DC way” frequently. The DC way is all about work ethic, and his team has embraced a rigorous offseason workload.
“Believe me, 4-7 is never going to be acceptable at Davie County,” Holman said.
Davie was close more times last season than Holman cares to recall.
“If we win six plays that we lost then we’re 8-3 and going to the playoffs,” he said.
Davie’s loss at West Rowan hinged on a Falcon punt-return TD and a West Rowan defensive stop on fourth-and-short. If Davie wins those two plays, it wins in Mount Ulla.
The Page and West Forsyth losses could’ve swung Davie’s way, while a blocked punt turned around Davie’s game at North Rowan when the War Eagles were leading late in the first half.
“Special teams bit us a few times, and we were just really young on defense,” Holman said. “We had some injuries and we had to bring kids up from jayvees and we got exposed by some good teams. But the good part of that is kids learned, kids matured and kids got better.”
Holman believes Davie “won” the offseason, but it would be hard to find any coach in America who’s not optimistic this time of year.
“We believe we’re better but we won’t really know we’re better until things go wrong and we face adversity,” Holman said. “We’ve been putting our kids in tough situations, repping them in tough situations, but until they’re in those sitations on a Friday night, we don’t know how they’ll respond.”
The Central Piedmont Conference always provides adversity and opportunities to respond. It’s a challenging league where Mount Tabor and West Forsyth are perennial powers, North Davidson and Reagan are on the rise, and R.J. Reynolds is talented. Only Parkland is struggling.
“Our league is very difficult,” Holman said. “No CPC gimmes — just dogfights every week. You have to wear full armor and be in attack mode every Friday.”
Davie’s offense, powered by stellar running back Cade Carney and outstanding QB Parker Correll, returns almost intact — 10 starters back — and that’s a unit that averaged 30.7 points per game in 2013.
Davie’s defense — where seven starters return — is the group that has to take a step forward against the good teams. It might.
“Because of depth, we’re going to play some skill guys both ways,” Holman said.
Holman didn’t name names, but look for Carney, a junior who has a stack of ACC offers, to play a lot of safety.
Holman said the War Eagles’ numbers are down a little. Davie has 110 athletes in the program. Davie started last season with 120, but it lost about 15 along the way due to injury and attrition.
Experience alone should make Davie better this year. The War Eagles will start finding out just how much better very soon.
Davie is practicing with Statesville and scrimmaging with the Greyhounds on Monday.
On Friday, Aug. 15, Davie will be part of a jamboree at Mooresville. Davie is taking on the host Blue Devils at 8 p.m. in what will basically be a half of real football. Even the kicking game will be live.
Holman is fighting a cold, but he’s still plowing full speed ahead. He said he’s picked up wrinkles in the offseason from several ACC coaches.
“As a coach, you never stop learning, and I’ve quizzed every coach I’ve come into contact with on how they do things,” he said. “And I just got off the phone with (former Davie coach) Doug Illing.”
Looking at Davie’s schedule, the War Eagles could be pretty stout and still not have a winning season, but if all the key guys stay healthy, Davie can put 4-7 in the rearview mirror.
“All of our kids are saying, “Hey, no more’ as far as losing those close games,’” Holman said. “They’ve worked their tails off, and they talk every day about doing things the DC way. No one here is settling for who we were last year.”