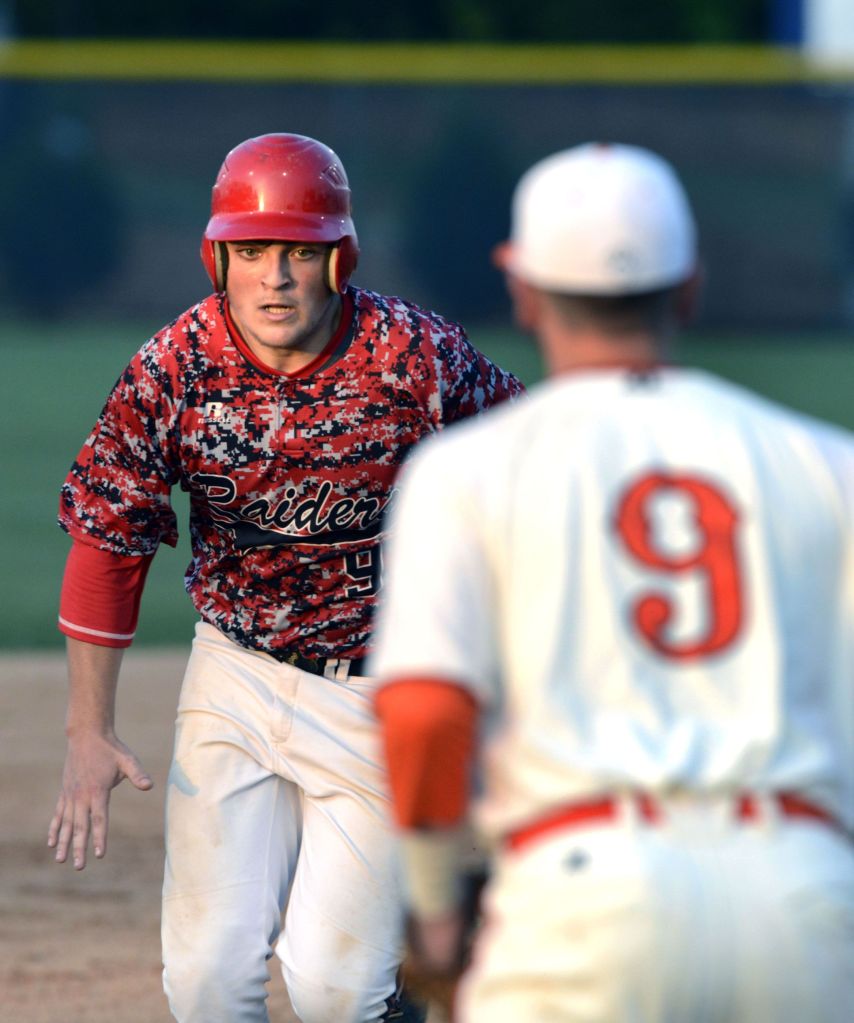 LANDIS — As a South Rowan junior, Chase Labbe only had 21 varsity at-bats and five hits.
As a senior, the big first baseman blossomed into an All-Rowan County and All-South Piedmont Conference performer.
So the obvious question is what the heck happened between Labbe’s junior and senior years.
How did he go from a guy who wasn’t playing much at South to a guy who will be competing for playing time next season for St. Andrews?
“Well, we worked out every Saturday in the offseason,” Labbe said. “That was the single biggest thing.”
Labbe got in better shape, became a better hitter, a better fielder, and a better leader.
“What he accomplished as a senior sends a really good stick-with-it message,” South coach Thad Chrismon said. “It’s never too late. There are late-bloomers in sports, and he’s evidence of that. He decided after his junior year he wanted to keep playing in college and he put in the work to make that happen.”
If the unusual name Labbe — it rhymes with Gabby — sounds familiar, it’s probably because his father is NASCAR’s Richard “Slugger” Labbe, the crew chief for Paul Menard. Chase, who attends the big races in Charlotte, said his father’s nickname didn’t have anything to do with baseball.
“I think he only played baseball for a year,” Labbe said. “He’s always been a racing guy.”
As a senior, Labbe did some slugging. He batted .316, scored 21 runs and drove in 20. He had seven doubles. He batted third all season for the surprising Raiders and came through with key hits.
In the 11-7 win at Concord, Labbe drove in four runs and was the winning pitcher in relief. He also had three hits when South edged the Spiders 2-1 in the rematch.
Labbe drove in two runs when South beat West Rowan 3-2 and he had the game-winning hit when South beat Carson 2-1 for the Easter tournament championship in Kannapolis.
“He obviously improved as a hitter and was one of our bigger threats, but he improved his fielding more than anything,” Chrismon said. “He saved us a bunch of runs with his glove at first base and he really became one of those senior leaders you need. And he led in practice as well as the games.”
It was right after that Easter tournament title that St. Andrews came to scout Labbe at South’s SPC home game against East Rowan. Labbe had some decent at-bats against East ace Connor Johnson in a wild game that South rallied to win 7-6. St. Andrews stayed in contact with Labbe after that, and Labbe liked the school when he went to Laurinburg for a visit.
Labbe helped South go 22-7 and win two 3A playoff games. He said his best high school baseball memory is winning at Marvin Ridge in the second round.
Labbe produced a solid summer for the South Rowan Legion team and was voted to play in the Area III All-Star Game by the league’s coaches.
He should have a good chance to help St. Andrews. St. Andrews was Division II until recently when it switched to NAIA competition in the Appalachian Athletic Conference.
Labbe believes he’ll probably be a teacher/coach down the road, but for now his biggest joy is baseball. He’ll report to St. Andrews on Aug. 21.
“I’m extremely proud of Chase for earning this opportunity,” Chrismon said. “He feels good about where his swing is right now and I think he’s going to do some great things for St. Andrews.”

South Sr. — A first baseman who hit out of the No. 3 spot in his first year as a starter for South, Labbe batted .316 with seven doubles and 20 RBIs. He helped out on the mound and was 2-0. Headed to St. Andrews.