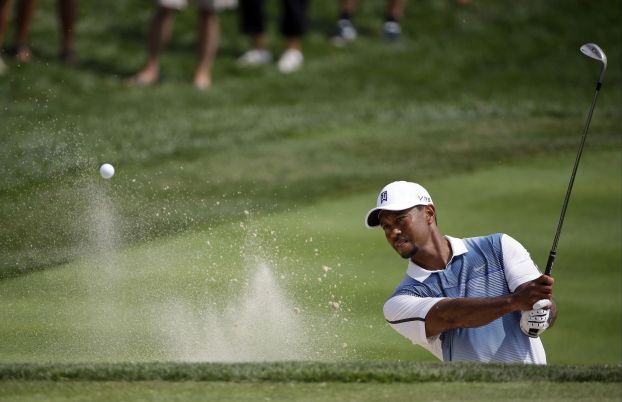 PGA: Woods ready to tee it up

LOUISVILLE, Ky. (AP) — Barely able to tie his shoes three days ago, Tiger Woods is ready to tee it up in the PGA Championship.
Woods caused the biggest sensation of the week Wednesday afternoon simply by driving his silver SUV into the parking lot at Valhalla. He has never arrived so late for a major championship and had so little time to prepare — just nine holes at Valhalla, which he had not seen since winning the PGA Championship in 2000.
But at least he’s playing.
That much was in doubt Sunday when he withdrew from the final round of the Bridgestone Invitational because of back pain that made it a chore to switch out of his golf shoes. Woods said he suffered a pinched nerve, but that it was not at all related to back surgery he had March 31 that kept him out of golf for three months.
He said his trainer adjusted the area above the sacrum.
“Once he put it back in, the spasms went away,” he said. “And from there, I started getting some range of motion.”
The latest injury occurred when Woods tried to play a shot from just above a deep bunker on the second hole at Firestone, and his momentum caused him to land hard in the sand. He kept playing, and hit some horrific shots before deciding to withdraw after a tee shot on the ninth hole.
That was only his third tournament since his return from surgery, leading to concern that he might be done for the year.
“It was a different pain than what I had been experiencing,” Woods said. “So I knew it wasn’t the site of the surgery. It was different and obviously it just the sacrum.”
His arrival put some life into what had been an ordinary week. Dozens of cameras captured Woods putting on his shoes with ease at his car. He got a big cheer just walking onto the practice range and the crowd was six-deep down the first hole, about like it was for the Ryder Cup at Valhalla six years ago.
In the nine holes he played with Steve Stricker, Davis Love III and Harris English, Woods looked the same as he did last week.
He drilled his driver down the first fairway. He badly pulled his tee shot on the third hole. It was a mixture of good and bad, about what can be expected from someone who has played only nine rounds in the last five months.
“Nothing great,” Woods said. “It’s only Wednesday.”
Woods tees off Thursday alongside Phil Mickelson and Padraig Harrington. He simply said, “Yes,” when asked if he expected to win, which seemed to be a tall order considering his return from surgery. Woods missed the cut by four shots at the Quicken Loans National, had his worst 72-hole finish in a major at the British Open and was in the middle of the pack at Firestone when he withdrew.
Barring a victory, this likely will be his last tournament for at least six weeks.
Woods is not eligible for the FedEx Cup playoffs, and he hasn’t given U.S. captain Tom Watson much reason to pick him for the Ryder Cup. Woods said he would have to “play well” to give reason for Watson to take him.
“That’s the only thing I can control,” Woods said. “Try to go out there and win this event. That’s all I’m focused on.”
Watson has said he wanted Woods on the team if he was healthy and playing well. About the time Woods arrived at the course, Watson was successfully dodging questions about his chances of making the team.
“It’s speculation what’s going to happen,” Watson said. “I can’t tell you what’s going to happen with Tiger.”
The excitement over his arrival was sure to be tempered by the reality of the task ahead. Not only has Woods gone more than a year without winning — and six years since he last won a major — Rory McIlroy has replaced him as the overwhelming favorite. McIlroy went wire-to-wire at the British Open, then rallied from a three-shot deficit to win the World Golf Championship at Firestone.
Sergio Garcia was a runner-up both times. Garcia, who went 0-3 playing in the final group with Woods at three majors, was asked about similarities between the two.
“When they are both at their best, to me it seems like Rory is less afraid of hitting driver,” he said. “And when he’s hitting it as well as he’s hitting it now, he’s hitting it very far and quite straight. So it’s a little bit of an advantage at that point.”
Woods might have lost his advantage from being a past champion at Valhalla. He missed the Ryder Cup in 2008 while recovering from knee surgery, and course architect Jack Nicklaus has made plenty of changes, particularly on some of the greens. Woods spent much of his time chipping from collection areas that weren’t around 14 years ago.
“It’s a totally different golf course than what I played in 2000,” he said. “The greens are all different. I have my book from 2000 — it’s useless. There’s some new things that we have to learn out there.”
With that, he headed to the back nine to walk the remainder of the course with his putter. He had 15 hours before teeing off in the final major of the year.

KANNAPOLIIS — There’s no precise conversion rate available, but the general feeling is that a 7-5 football season at A.L.... read more