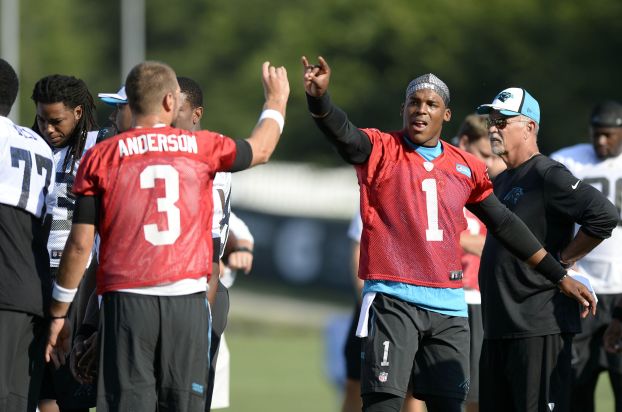 SPARTANBURG, S.C. — Carolina Panthers quarterback Cam Newton is eager to test out his surgically repaired left ankle Friday night against the Buffalo Bills.
He’s just not sure if he’ll get that opportunity.
Newton said the plan is to follow the advice of team trainers and coaches when it comes to his availability for Carolina’s preseason opener. He threw passes on the side during practice Thursday, but did not participate in team drills.
“Do I want to play? I do,” Newton said Thursday. “I think this is an opportunity for me to play. But I’m sticking to the program and what coach is asking me to do and (trainer) Ryan Vermillion is asking me to do.”
Newton has been looking forward to getting some live game reps with a revamped group of wide receivers that includes rookie Kelvin Benjamin, his new close friend and favorite option in training camp.
But that may have to wait another week.
Coach Ron Rivera said he hasn’t made a decision on Newton’s status, adding that even if he does play it will only be for a series or two and may consist primarily of handoffs.
“We want to make sure we do it right,” Rivera said. “We want to make sure he’s ready to roll and he can protect himself.”
Rivera might have bad memories of Bills defensive end Mario Williams. Williams had 41/2 sacks in Buffalo’s regular season Week 2 win last season over Carolina — at least three of those against Byron Bell, who’ll be starting at left tackle.
Rivera said Derek Anderson will start if Newton doesn’t play.
Newton had surgery on his left ankle in March, but has participated in all drills since the start of training camp before being limited on Wednesday and Thursday.
The Panthers have been careful with their Pro Bowl quarterback. Offensive coordinator Mike Shula hasn’t even called a single running play for the normally mobile Newton in practice for fear he might suffer a setback.
“I feel like my ankle is getting stronger,” Newton said. “As long as we keep this progress up, I think we will be in good shape.”
The Panthers are facing a Bills team that also is trying to stabilize their situation at QB.
Coach Doug Marrone is hoping EJ Manuel can establish himself as the franchise’s long-term starter entering his second season in the league.
Manuel has been inconsistent during training camp and struggled in a 17-13 loss to the New York Giants on Sunday night. Two of Manuel’s seven pass attempts were batted down at the line of scrimmage and another was nearly intercepted when he locked in on wide receiver Sammy Watkins.
The Bills will certainly be looking to showcase Watkins.
The fourth overall pick in the draft from Clemson has been impressive in camp, but failed to catch a pass in his preseason debut.
Watkins and newly acquired receiver Mike Williams are starting. The Bills are working Robert Woods and Chris Hogan in the slot. Woods, last year’s second-round pick, had a slow start to camp but has stepped up his play recently and scored Buffalo’s only touchdown against the Giants.
Marrone had a chat with Woods on Wednesday after the walk-through, assuring the wide receiver his role in the offense and also telling him he needs to play with more of a chip on his shoulder. Woods responded in practice by making a great one-handed catch in practice.
Buffalo’s offensive line remains unsettled with left tackle Cordy Glenn still on the active/non-football illness list and with questions at both guard spots.
The Buffalo offense will be tested by a Carolina defense that finished No. 2 in the league last year, behind only the Super Bowl champion Seattle Seahawks. Carolina is led by middle linebacker Luke Kuechly, but Rivera said two key starters — defensive end Charles Johnson (hamstring) and safety Roman Harper (toe) — will not play.

KANNAPOLIIS — There’s no precise conversion rate available, but the general feeling is that a 7-5 football season at A.L.... read more