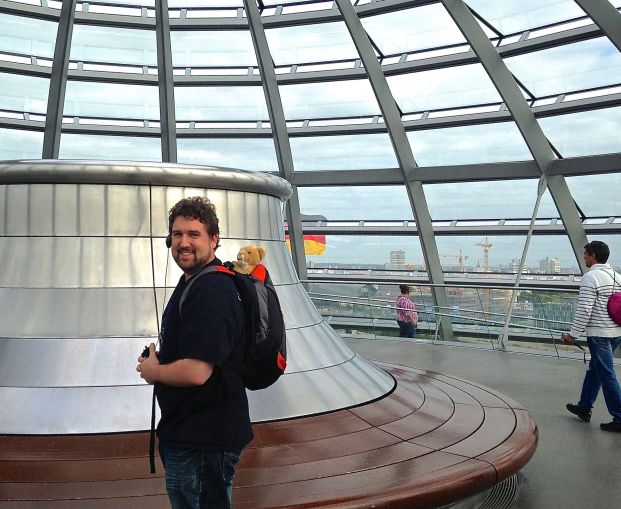 Alex Reynolds and Rebecca Merriman left Germany with the same takeaway — the kids in Germany really aren’t all that different from the kids in North Carolina.
Reynolds and Merriman were two of roughly 30 “Global Teachers” from across North Carolina who traveled to Germany with the University of North Carolina’s Center for International Understanding this summer.
Reynolds is the drama teacher at Rowan-Salisbury’s Carson High School, and Merriman is a kindergarten teacher at Jackson Park Elementary in Kannapolis. Both were 2013 teacher of the year for their respective districts.
The 10-day trip took them to five German cities — Berlin, Stuttgart, Freiburg, St. Peter and Munich — to learn about Germany’s educational system and energy independence.
All of the teachers had the opportunity to teach a class in a German school.
Merriman taught two — a kindergarten class and a fifth-grade class.
She said she taught the kindergarten class a “very simple song in English.”
In the fifth-grade classroom, she passed around a roll of toilet paper and told the students to take as much or as little as they needed. Then, she had the students either tell her something about Germany or ask her a question about America.
Using the facts they shared and the answers Merriman gave, they created a Venn diagram comparing and contrasting the two countries.
Merriman said the activity helped the students build their English vocabulary.
“The kids really seemed to enjoy it,” she said.
Since there wasn’t a theater class at the school where they were, Reynolds was assigned to a physics class.
All but one of the students spoke fluent English, so he decided to talk about different American dialects.
So Reynolds demonstrated five different accents, including ones from New York, the High South and the Appalachian mountains.
After his demonstration, he asked the students to weigh in.
“Then they pronounced a lot of different German dialects for us,” he said.
“We also got to learn about their education system as well,” Merriman said, adding that she was particularly impressed with the Germans’ foreign language program.
“Starting in kindergarten, they begin immersing the children in foreign language,” she said.
In kindergarten, part of the day is taught in English. As the children get older, additional foreign languages such as Latin and French are added into the mix.
Merriman and Reynolds both said they found Germany’s tiered educational system interesting. In that system, students’ academic progress is tracked from an early age and they are placed in different tracks accordingly.
The tracks determine which children are university bound, will train in a vocational trade or need more practical learning for a career in sales, hospitality or customer service based on aptitude.
Track decisions are made with parents’ input, and students can always jump tracks, Merriman explained.
“The best part about the German system is how they run internships,” Reynolds said.
Private companies offer internships and the businesses not only pay the interns, but also pay for the students’ training.
“They have highly trained people,” Reynolds said.
Merriman said she’d like to see North Carolina be a frontrunner for increasing the number of vocational trade opportunities that children who are not college bound can turn to as a career.
One of the teachers’ stops was St. Peters, an entirely energy-independent town.
Reynolds said he enjoyed seeing how the town worked together for a common, good cause.
The town uses entirely renewable energy sources such as solar panels and windmills, he said.
“That was really neat to see,” Reynolds said, adding that he’d like to bring that unity back into the schools.
“We like competitive sports, but we don’t need competitive education,” he said. “We’re all in this together.”
Merriman’s and Reynolds’ trips were made possible by donations from local foundations. The Robertson Foundation annually sends the Rowan-Salisbury teacher of the year and the Hayes Charitable Foundation sent Merriman.