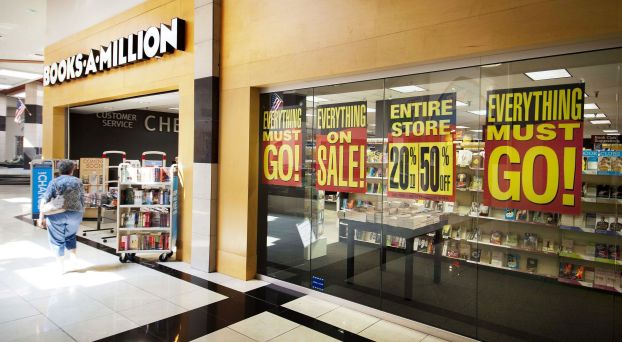 Books-A-Million at West End Plaza will close by Sept. 30.

Books-A-Million at West End Plaza will close by Sept. 30.
General Manager Kelly Nash said Wednesday afternoon that she and the store’s three other employees received the news on July 27.
“It was pretty bad,” she said. “It was kinda emotional. We’ve all been here quite a long time.”
Nash has been with Books-a-Million for the past eight years. Two part-time employees have worked there nine and six years, respectively.
County Manager Gary Page told the Post that he received notice of the bookstore’s intent to close last week.
“I’ve offered to negotiate a better lease and spoken with the on-site staff several times, to no avail,” Page said.
Nash said that sales had been dropping gradually as other stores in the former Salisbury Mall began to close.
“When we lost Belk and J.C. Penney, that was very bad,” she said.
Nash said she didn’t know whether she and her employees would get any help with packing up the store’s books, cards and other merchandise to send back to the warehouse.
“I’ve never had to do a store closing before,” she noted.
An email to a Books-a-Million corporate representative was not immediately returned late Wednesday afternoon.
Nash said she and her employees have also not yet been told whether they’ll be reassigned to other Books-A-Million stores nearby. There are locations at Carolina Mall and Concord Mills, as well as in Charlotte and Statesville.
Nash said it was her understanding that Books-A-Million may be looking for another Salisbury location.
“They don’t want to give up on Salisbury,” she said.
At present, everything in the current location is 20 percent off, including all books and magazines. Greeting cards at 50 percent off, and general merchandise is 30 percent off. Some audiobooks and bargain books are priced 20 percent off their sale prices.
Nash, whose green Books-A-Million apron was covered with at least a dozen small buttons, said this was only her second job. She worked at Food Lion for five years, and came to Books-A-Million after being hired during the Christmas season.
“I really like it,” she said. “I love to read.”
One of her many buttons read, “Keep Calm and Read On.”
She said that, despite the popularity of e-readers, customers still want to read real ink printed on real pages.
“I have tons of people who say, ‘I like a regular book in my hand,” Nash said. “I will never read on an e-reader. I love a book.”
Books-A-Million’s hours are 1-6 p.m. Sunday, 10 a.m.-8 p.m. Monday-Thursday, and 10 a.m.-9 p.m. Friday-Saturday.
Freelance writer Susan Shinn lives in Salisbury.