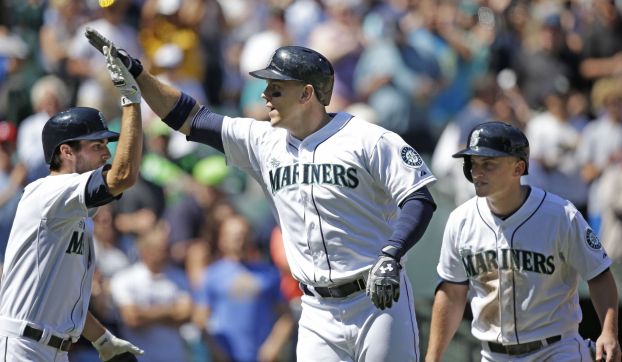 Braves lose eighth in a row

SEATTLE (AP) — Without wavering, Chris Young will say it each time he is asked: Individual wins are not important to him. It’s about the team’s success, the veteran right-hander says, going to painstaking lengths to get his point across.
Young reached his first double-digit win total in a season since 2006 on Wednesday, but it truly was a team effort this time around as the Seattle Mariners sent the Atlanta Braves to a season-high eighth straight loss with a 7-3 victory.
It is the first time since May 2012 that the Braves, who were swept at Dodger Stadium and San Diego before losing two straight at Safeco Field, have lost eight in a row.
“You can’t get caught up in wins and losses as a starting pitcher. One day the media will stop evaluating us on that,” Young said with a laugh.
Young (10-6), who allowed all three runs in the third, was immediately picked up by his teammates, as the Mariners responded with a four-run third.
Dustin Ackley led off with a home run and Logan Morrison added a three-run shot off Julio Teheran (10-8) for a 5-3 lead.
Teheran was wildly inconsistent in six innings, yielding six runs in three frames, while allowing just one baserunner in the other three innings.
Even after allowing Ackley’s homer, Teheran appeared to have settled down with two quick outs and a 3-2 advantage. Kyle Seager and Chris Taylor hit back-to-back singles, though, and Morrison deposited a fastball into the right-field seats.
After Young protected the 5-3 lead through the fifth, the bullpen took over. After a quick hit, four Seattle relievers combined to throw four innings of scoreless relief, allowing three hits.
“It’s nice to have an eight-man bullpen with so many quality arms down there, so many choices,” Seattle manager Lloyd McClendon said.
Seager drove in Seattle’s first run with a single in the first, and Taylor and Kendrys Morales later added RBI singles.
The Braves scored all three runs in the third, with Freddie Freeman driving in two with a bases-loaded double, but Tommy La Stella was thrown out trying to score from first on the play.
“It’s just not matching up right now,” Braves outfielder Jason Heyward said. “It’s not clicking on all cylinders at the same time for us.”
TRAINER’S ROOM
Braves: SS Andrelton Simmons, who sprained his left ankle during Tuesday’s game, was wearing an air cast and using crutches on Wednesday morning. He still hopes to avoid time on the disabled list.
Mariners: OF Michael Saunders, on the 15-day disabled list with a strained left oblique, will join Triple-A Tacomaon Thursday to begin a rehab assignment. McClendon said Saunders will DH before moving to the outfield. … INF Willie Bloomquist did not get a positive report after being checked out by a doctor on Wednesday and will get a second opinion on his bruised right knee.
UP NEXT
Braves: Atlanta returns home to start a 10-game homestand against the Nationals on Friday. Ervin Santana (10-6) lost his only career start against Washington.
Mariners: Rookie Roenis Elias (8-9) will make his second career start against the White Sox on Thursday. Elias allowed five runs in five innings in Chicago on July 4.
ACK-ATTACK
Ackley continues his torrid pace at the plate and is hitting .346 (37-107) since July 1 after collecting two hits, including the home run.
HOME VS. AWAY
Teheran did nothing to help boost his road stats. The right-hander entered the game 6-6 with a 3.91 ERA away from Turner Field. At home, Teheran is 4-1 with a 1.48 ERA, which is tied for the major league lead in that category.

SALISBURY — Even in state championship seasons, not everything’s come easy for the Salisbury football team. The Hornets have never... read more