The Great NC BBQ Map will lead you to pork palaces 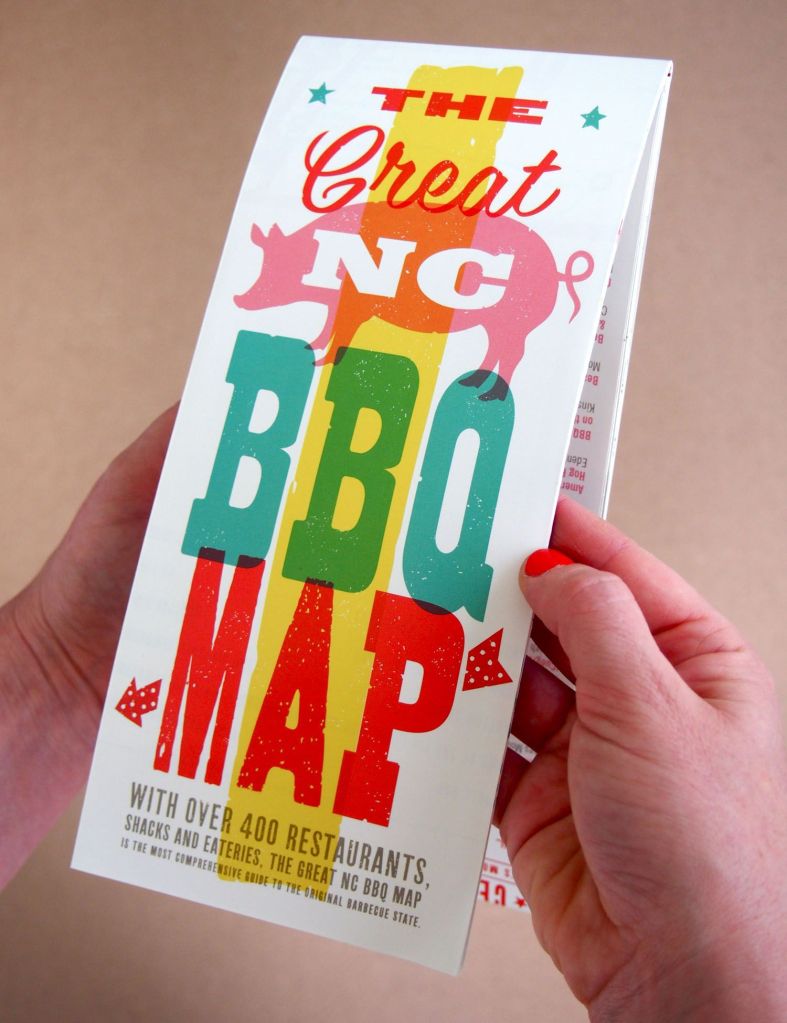 Are you a barbecue fiend? There are plenty of you out there. Now, if you have to travel in North Carolina, you’ll have The Great NC BBQ Map to help you get your fix.

Amanda Fisher and Paul Bright of Charlotte released The Great NC BBQ Map for sale to the general public on Aug. 1. The printed road map, in a style that combines a modern infographic approach with a traditional road-map format, condenses a large amount of information on each barbecue restaurant. Map symbols indicate whether each restaurant cooks the whole hog or part of the pig, what cooking method is used, and what style of sauce is served.

A press release about the map says it “is the most comprehensive guide to the state’s barbecue tradition, including information on 434 barbecue restaurants, a list of 42 barbecue festivals, and historical information about barbecue in America and its two North Carolina styles.

Fisher and Bright have been working on the project for more than a year and have uncovered more barbecue restaurants than previously recorded in other guides. They say their map “is the first to include such depth of detail on each restaurant’s style of barbecue and full information to help patrons plan their visits. The two interviewed people at the restaurants.

“We’ve always loved working barbecue stops into our own road trips, so we knew what information was missing,” said Fisher. “For some of these places, it’s otherwise impossible to find accurate information, or in some cases, any at all. We wanted to take the guess work out of finding barbecue.”

In the alphabetical restaurant listing on the back of the map, each restaurant’s address, phone number, and hours, including seasonal variations, are given. If a restaurant is cash-only or take-out only, it is noted.

The map also breaks down the differences in North Carolina’s two styles of barbecue – Eastern style and Piedmont style (also known as Lexington or Western style). “I think we dispelled some myths, there,” Fisher said. “A lot of people think that barbecue in the Piedmont has a thicker tomato-based sauce, but both styles are vinegar-based. Piedmont sauce has just the tiniest bit of ketchup or tomato-based product and sugar added, but it’s still a thin, vinegary sauce.”

The map symbols show the influence of geography on each restaurant’s barbecue style. For example, there are heavy concentrations of whole-hog barbecue in Eastern North Carolina, which is historically accurate to that style. There is a strong patch of red to represent Piedmont sauce around the I-85 corridor through Kannapolis, Salisbury, Lexington and up into Winston-Salem. That color starts changing between Burlington and Hillsborough, as sauce transitions to Eastern-style.

There is also a symbol color for other sauces that aren’t traditional to N.C., and this color is found most around the borders, as barbecue traditions from South Carolina, Georgia and Tennessee creep in.

The map also helps users find anomalies, like the one whole-hog cooker in the far west. “You can see how styles aren’t always confined to their original regions. You’ll find restaurants that blend the styles and create their own interpretations,” Bright explained.

Unlike other barbecue guides, Fisher and Bright haven’t given reviews or rated the restaurants in any way. “Everyone has different tastes. We want people to try the barbecue and decide for themselves what they like,” said Fisher.

“Even though we’ve given people more information on barbecue restaurants than they’ve ever been able to find before, we didn’t want to completely demystify the entire experience. What gives any road trip its magic is that feeling of discovery,” Fisher said. “We’ve found out a lot of interesting things about a lot of these restaurants, like which one raises its own hogs, which ones you can land a plane at, places that are on the river, in a building behind the owners’ house, and that list just goes on. But those are the things that are still left for people to be surprised by.”

The pair emphasize the inclusiveness of the map. “Some restaurants thought they had to pay to get on it, but if they’re a barbecue restaurant, they’re just on the map, period,” Bright said.

The Great NC BBQ Map is a North Carolina product, conceptualized by Fisher and Bright in Charlotte, designed in Raleigh, and printed by Meredith-Webb Printing Co. in Burlington.

For the graphic design, the two worked with Chris and Elizabeth Boyette, the Raleigh-based husband and wife team Good-South. Good-South is most known for their label design for Slingshot Coffee Company’s Cold Brew bottles, featured on Buzzfeed’s 34 Coolest Food Packaging Designs of 2012.

“We really wanted to bring together a group of North Carolina minds for this project to give the map a great southern feel,” Fisher said. “Everyone who worked on this project is completely obsessed with barbecue. We’d talk to the designers or the printers, and they were all ravenous for barbecue from working on this map.”

Bright confessed, “I can’t even begin to count the number of barbecue sandwiches Amanda and I have had this year. And the funny thing is, at home, we’re pretty close to vegetarian.”

You can order The Great NC BBQ Map online at http://www.thegreatbbqmap.com/ . Maps will also become available at restaurants and shops across the state in the coming months.