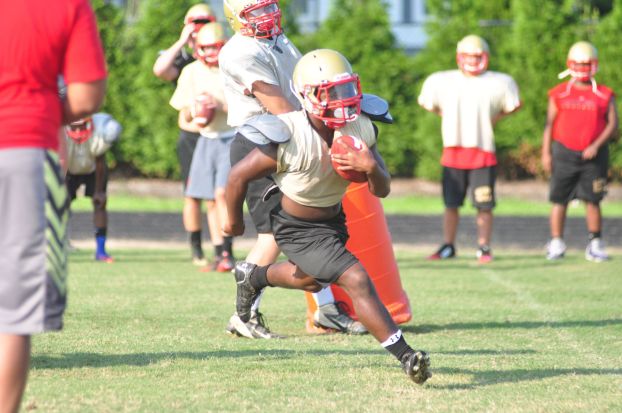 SALISBURY — Even in state championship seasons, not everything’s come easy for the Salisbury football team. The Hornets have never shyed away from making it hard on themselves.
You might forget, but in 2010 SHS lost to Carson, West Rowan and Davie County in a 3-3 start. Of course, West won its third consecutive state 3A title that year, Davie was a 4A finalist and Carson finished 10-3 beyond a Division I signee in Shaun Warren. The Hornets won their first state championship this year, so that gets lost.
But the hard fall Salisbury took at the beginning of last season was something it wasn’t prepared for.
A tough schedule and inexperience at key positions left SHS out of the state 2A playoffs for the first time since 2001. Replacing college athletes like Brian Bauk, Justin Ruffin and Keion Adams hit the Hornets hard.
Unfortunately, that tough list of non-conference opponents is back and the conference slate includes a season finale against North Rowan, who’s ranked fourth in 2A to start the year. Carson, East Rowan, West, Lake Norman and 2012 state champion South Iredell are again the first five games and they equaled an 0-5 start last year.
It wasn’t the way Salisbury coach Ryan Crowder envisioned his first season as head coach after being defensive coordinator for eight years. But he’s kept his sense of humor.
“I can promise you the schedule’s already different next year,” Salisbury coach Ryan Crowder said with a laugh.
“The big thing is, we never played a schedule like that even when we were winning state championships. It doesn’t start easy and it doesn’t end easy.”
However, SHS was competitive in Central Carolina Conference play, beating Lexington and West Davidson and holding the lead late against Thomasville and East Davidson. Salisbury appeared to be at least a competitive 2A squad who’s confidence was shaken.
“In that East Davidson game, we didn’t have the confidence we should have,”Crowder said. “We’re not going to let a East Davidson game get away from us this time.”
Senior quarterback Riley Myers suffered a significant elbow injury during baseball season, but he played throughout legion season and is okay to lead the offense again. Myers backed up Bauk for a couple years before taking over last season. Myers was just short of 1,000 yards passing despite missing the South Iredell game due to a concussion.
“We’re still young, but we’ve got those seniors in the backfield,” Crowder said. “The young guys got to play a lot and some there’s experience there.”
At the start of his second season, Crowder feels his team is ahead of where it was at the starting point last year. SHS has had a little under 80 show up for the first few days of workouts if you include jayvee guys. A few more will show up after vacations are over.
Willie Clark is the leading returning rusher and is backed up by Antwond Glenn and Dae’Shaude White. Cameron Horne and Marcus Corey will get handoffs as well in the run-heavy SHS offense.
Senior Ryan Jones is one of the better athletes at SHS and will come back to play receiver. Damann Millsaps and Will Steinman are suitable backups at WR.
Defensively, there’s seven returning starters to bolster the loss of County Athlete of the Year Clint Comadoll, a four-year varsity linebacker, and defensive back Antwuan Payne.
Cornerback Dante Gaston returns for his senior season and linebackers Jordan Oglesby, D.J. Alexander and wrestling stud J.C. Burton all come back after significant time in 2013. Darius Jackson plays the Hornet position, sort of a jack-of-all trades, and Desmond Millsaps and Cameron McLendon are back on the defensive front.
“We’ve got a lot of guys with varsity experience so we feel good about that,” Crowder said.
Stephen Mazur is in his third year as the varsity kicker. Mazur nailed a field goal in the final seconds of a 2012 playoff win against High Point Andrews.
A few new coaches are on staff. Greg Derrick, who played at N.C. State and briefly with the New York Giants, is an offensive line coach. J.J. Gwyn, who played at SHS in the 2000s, is a new defensive line coach and former Catawba wideout Terrance King will help the receivers. Familiar faces like Scott Eagle and Ryan Ochier are back to assist as well.
The Hornets have scrimmaged against Albemarle, Northwest Cabarrus and Piedmont.