Wineka column: Rowan longrifles had a style all their own 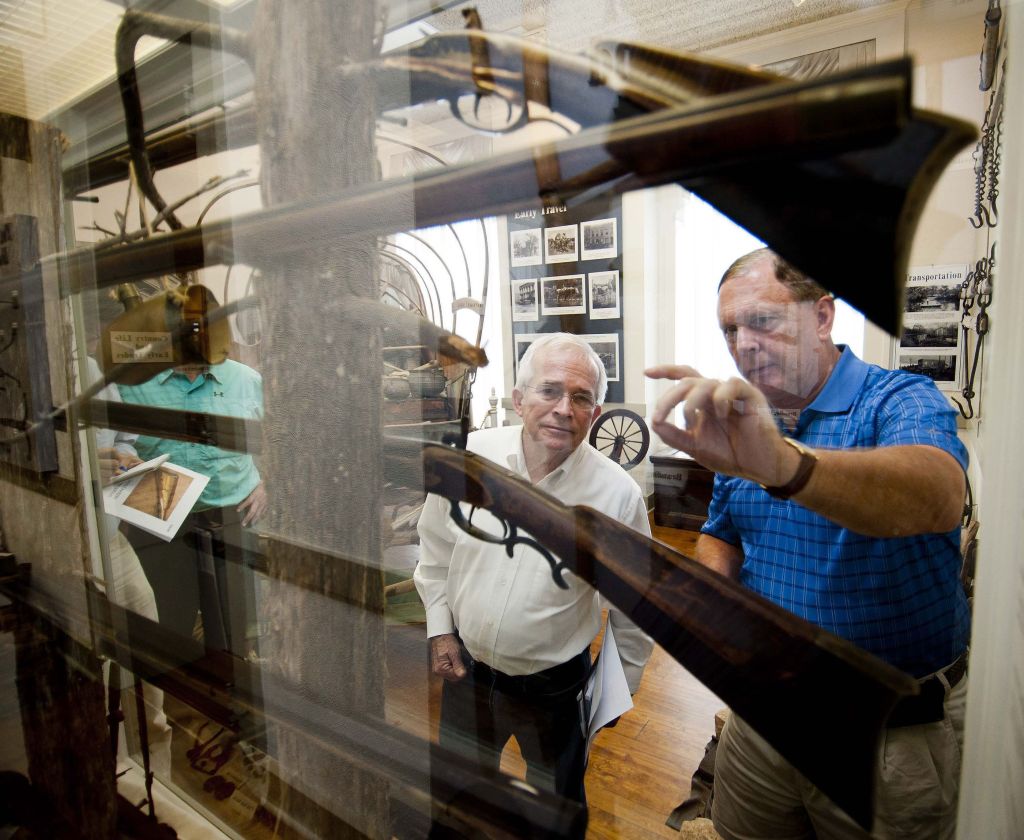 SALISBURY — When he picks up a Rowan longrifle, C. Michael Briggs can’t hide his passion for the guns.

The Rowan longrifle — one of nine “schools” of longrifles operating in Piedmont and western North Carolina from 1770 to 1830 — had a wonderfully different architecture and remains a highly coveted model, Briggs says.

He shows how the butt stock had a much more dramatic drop to it. He admires the scooped-out cheek rest and a high comb also scooped out on both sides of the tiger-striped maple stock.

He points to a double-incised, carved line starting at the butt plate, continuing up and around the trigger guard and returning to the butt plate on the other side of the stock.

Other longrifles of the era did not have that line.

The Rowan longrifle often featured fore-stock moldings and two-screw side plates with hooks — Germanic in design. There was chip carving on the rear butt-stock, and Rowan longrifles had nose caps with a wedding-band style to them.

The brass Christmas tree patchboxes — long and tapering — also were features belonging to a certain subschool of the Rowan longrifle: the Eagle-Ribelin-Nash group.

There are only 14 known examples of this style of patchbox on Rowan longrifles in private collections or museums.

Briggs says if a Rowan longrifle is signed by its gunsmith, it is signed on the patchbox lid, usually upside down so it could be read by the person holding the rifle.

It’s hard to say exactly how many Rowan school longrifles survive. There were two subgroups: the Bruner group and the aforementioned Eagle-Ribelin-Nash group.

Briggs says there are about 20 known surviving longrifles of the Eagle-Ribelin-Nash group and three of the Bruner group. Briggs owns three Rowan longrifles, and the Rowan Museum has three as part of its permanent display.

Briggs, president and chief executive officer of Call Coverage Inc. in Greensboro, recently brought four of his longrifles to the Rowan Museum so Ben Ribelin, Norman Ribelin and Pat Beck could get a closer look.

Ben Ribelin is a great-great-great grandson of Isaac Ribelin, who may have been the most prolific maker of longrifles in the Rowan school.

Briggs says at least five signed rifles by Isaac Ribelin are known to exist, while others are attributed to him. Born in Morgan Township in 1801, Isaac also had a son, Jesse, known to be a gunsmith.

These days, Briggs has become as much a genealogist as he is a gun collector and historian. Next year, he hopes to publish a history of the longrifle makers of the Rowan school, but he is still looking for as much information as he can collect on at least 27 gunsmiths he has identified as possible practitioners in the Rowan school.

That information could be in the form of genealogies, longrifles or pistols, artifacts and documents related to that gunsmithing era, photographs, deeds or maps showing where gunsmith shops were and more.

Briggs plans to be at the Rowan Museum from 1-4 p.m. Sept. 13 to allow for visitors to get a look at his rifles, and he hopes people also will show up with anything and everything they might have related to Rowan longrifles and their gunsmiths.

Pat Beck, of the Genealogical Society of Rowan County, and Norman Ribelin are trying to help Briggs with some of his research. Briggs will speak to the local genealogical society Nov. 18 at the Rowan Public Library in Salisbury.

So far, Briggs has photographs of nine Rowan longrifles he intends to include in his book, with plans on obtaining at least five or six more.

The way Briggs explains the “schools” for longrifles is that individual regions had their own styles for things such as furniture and pottery. The same became true for longrifles.

The earliest North Carolina longrifles have always been hard to identify because they look like longrifles made in Pennsylvania and Virginia. That’s where many gunsmiths who settled in Rowan County and other regions came from.

Briggs says the late John Bivins, noting that Salisbury was a trade center in Colonial times, believed there were gunsmiths making longrifles in Rowan County by 1760 and that Daniel Boone’s first longrifle likely was made here.

But to Briggs and others, the big mystery is what an 18th century longrifle from Rowan looked like — one has yet to be clearly identified.

In his book, “North Carolina Schools of Longrifles 1765-1865,” William W. Ivey said, “There are numerous gunsmiths documented working early in Rowan, and I feel there are some surviving rifles that are presently attributable to Pennsylvania and Virginia that were made in this area.”

As for the Bruner group of the Rowan school, Briggs says there were at least three generations of men named Henry Bruner, with some working here prior to the Revolutionary War.

The three surviving longrifles of the Bruners are all linked to Henry Bruner III, who died in 1819 at age 30 and is buried in Salisbury’s Old English Cemetery, according to Briggs.

John Eagle was born in 1790, and the best surviving example of a Rowan longrifle is signed by him and is on display at the Museum of Early Southern Decorative Arts in Old Salem.

Leonard Nash actually lived in Iredell County but trained with the Eagle-Ribelin-Nash group. A number of existing Rowan longrifles are signed “L.N.,” but only one — part of Briggs’ collection — has a Christmas tree patchbox.

Other interesting gunsmiths with Rowan connections included George Vogler, who was born in Forsyth County. He apprenticed under his uncle Christoph Vogler in Salem in 1806 and later married a daughter of Henry Bruner and moved to Salisbury. Vogler made Salem school longrifles in Salisbury for many years.

Gunsmith Philip Yost Jr. was born in 1777 and died in Rowan County in 1848. There is a signed example of his Rowan longrifle in a private collection in California. It is signed “P. Yost” and dated April 1819.

Briggs says it is the earliest known example of an Eagle-Ribelin-Nash style rifle.

Briggs’ love for longrifles began in 1980 when he bought his first three Jamestown school models. He has been in the game long enough to know there will always be new information and discoveries about the longrifles, including the Rowan school of longrifle makers.

“This book is never going to be the be-all and end-all,” Briggs says.

But it should be a good contribution to understanding Rowan history a little bit better.