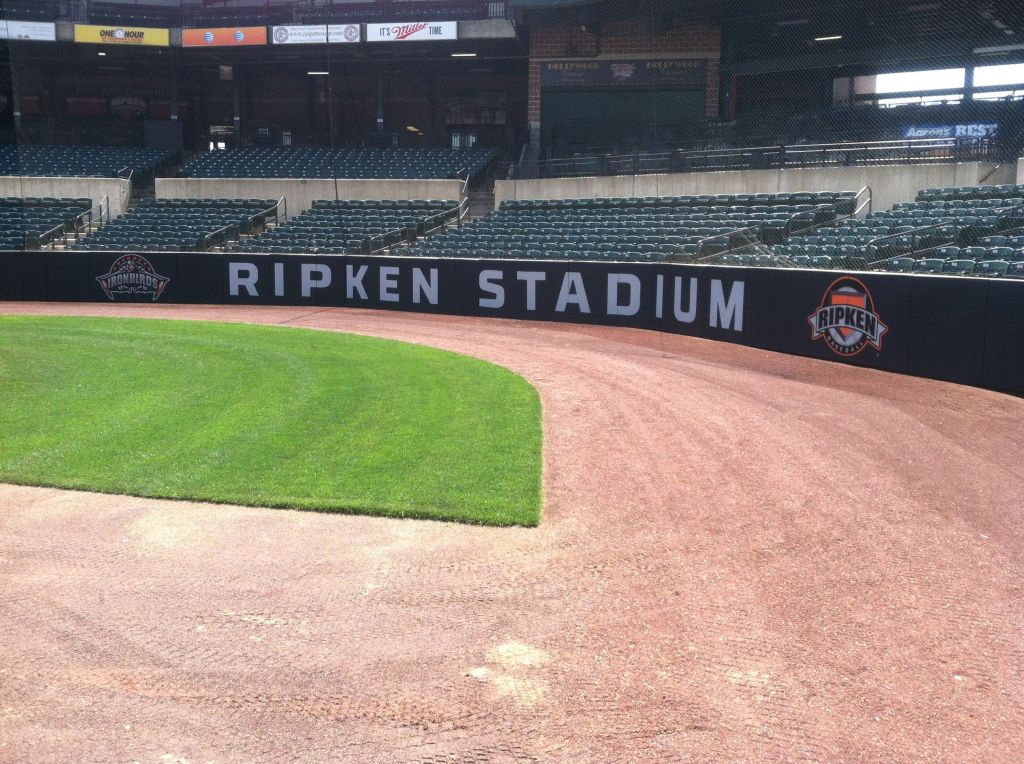 SALISBURY — First it was the green and gold uniforms and white shoes of the Kansas City-then-Oakland A’s during the 1960s. Then came the proliferation of colorful alternate jerseys and caps of the 1990s. Now, with a big assist from Promats Athletics, the explosion of color in professional baseball has come to the walls at Ripken Stadium in Aberdeen. Md., home of the Aberdeen Ironbirds, a New York-Penn League team owned by Hall of Famer Cal Ripken Jr..
When the Ironbirds opened their home season on June 20, fans got their first eye-opening look at the new Ripken Orange protective padding covering the outfield and foul lines walls. To bring the new look to Ripken Stadium, owner Ripken took a hands-on approach in working with the padding specialists at Promats to give the stadium a colorful and much talked-about look. The end result made Major League Baseball’s Iron Man very happy.
“We are thrilled with our new orange outfield pads that were made and installed by Promats Athletics,” Ripken said. “We wanted to enhance the Ironbirds brand and tie our team more closely to the Orioles. This certainly helps us achieve that goal and really sets Ripken Stadium apart from other ballparks. The orange pads and our new overall look has been very well received by our fans and the community.”
To meet the Ironbirds expectations, Promats matched the custom color from the team’s logo to its vinyl covering and produced 275 custom-colored Ripken Orange pads for the walls in the outfield and along the foul lines. To complete the project, Promats made and installed roughly 115 black pads, many with printed graphics in the area around the backstop and dugouts.
“When your services are called for by a living baseball legend, it’s more than just business,” said Matt Cross, director of sales for Promats. “We were excited by the challenge and the opportunity to help create some buzz for the Ironbirds. We couldn’t be prouder of the job and making Cal Ripken Jr. a satisfied customer.”
For more than two decades, Promats Athletics has been making protective padding for all levels of baseball. On the Major League Baseball front, before this season Promats padded Progressive Field (Cleveland Indians), Great American Ball Park (Cincinnati Reds) and Turner Field (Atlanta Braves). The company also completed work on sections of Yankee Stadium (New York Yankees) and Busch Stadium (St. Louis Cardinals).