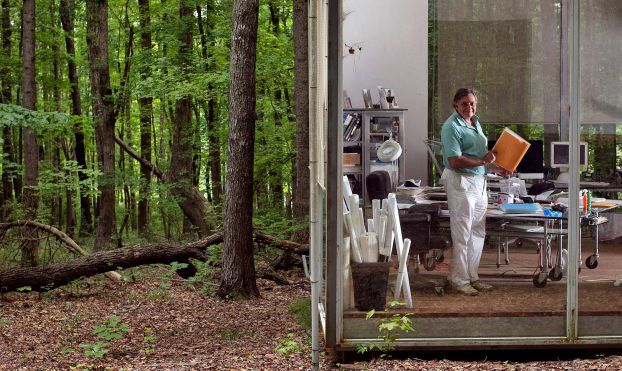 Another feature is the wood’s surface. Baba doesn’t plane the surfaces, cutting only from the bottom until it gets to the right length. The tops of boards are each hand-sanded, then fumed with ammonia to pull out tannic acids and darken the wood.
“If you took a piece of regular oak and let it sit 100 years,” Ortiz said, “that’s what we’re doing with this fuming process.”
After that, all the knotholes and other imperfections are stuffed with round plugs and rectangular chunks called splines. That way, Baba can use longer boards without having to cut around the holes.
“If a high heel can go in it, it’s too big,” said Ortiz, explaining the rule.
All around him, the lumber sits stacked 15 feet high, bygone barns waiting their turn.
Among its references, Baba lists the owners of Starbucks and Chanel.
Bunny Williams, celebrated interior designer, endorses their floors.
Ronald S. Lauder, billionaire son of the Estee Lauder cosmetics family, wrote this letter:
“Dear Jonathan,
I should have told you long before now how much Jo Carole and I love the floors. They add so much to the wonderful feeling of the rooms, and they fit into the décor as though they have always been there.”
But Grumette still calls his turn in reclaimed wood a happy accident, a chance to turn the unused into something vital, the unwanted into treasure. Clients don’t just want it to look pretty. They want it to tell a story.
That was the case for a top executive at Costco. When Baba put in his floors, Ortiz said, the curious client asked exactly where it came from. He enjoyed hearing of its history as a tobacco warehouse, and just for an extra kick, Ortiz told him what now stands in its place.
“It’s a Costco now,” he said. “He was tickled by that.”
———
Information from: The News & Observer, http://www.newsobserver.com