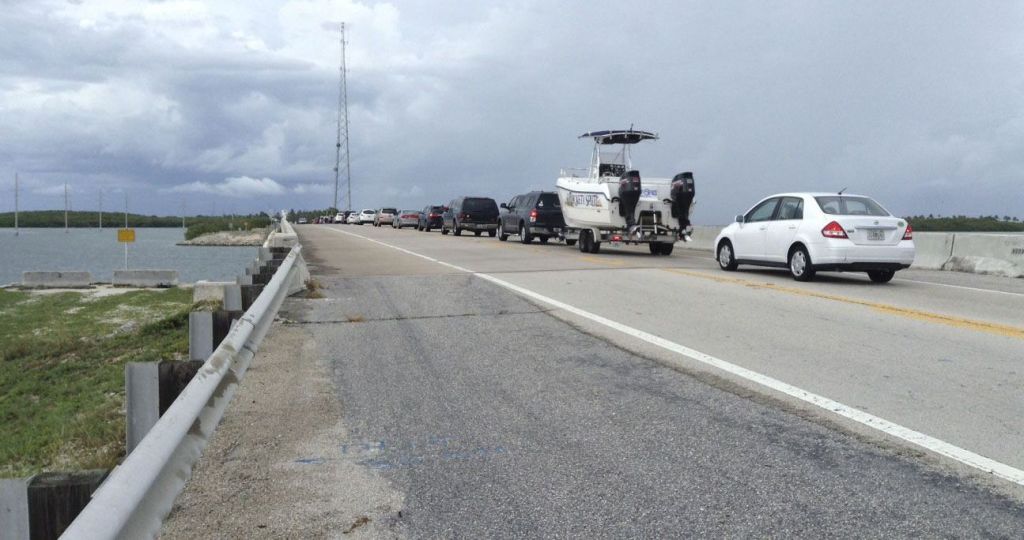 It was with some uncertainty that I left Homestead and headed south toward the Keys this morning. The weather forecast called for early morning storms and I didn’t even have a rain jacket. As soon as I saw the sky, a few streaks of lightning were highlighted against some major thunderstorm clouds. It seemed only a matter of time until I would get really wet.
Almost as soon as I left Homestead, the mileage markers for the distance through the Keys started. Mileage to Key West was being posted. There was moderate traffic headed south, but almost none going north at 7 a.m. Gradually that changed, even by the time that I hit Key Largo. The road to the first Key was straight and freshly paved. The rain did start and came in waves, but never super heavy. One of the signs told us to watch for crocodiles crossing the road. I was a little disappointed to not see one.
A stop at the visitor center for Key Largo was good for some ideas on where to stay and that I needed to get a poncho or rain jacket. I was told that the Kmart just ahead had a good selection. The tip paid off and I got a good one in a bright color.
The road was straight, so there was no need to worry about directions. I rolled through small crossroad communities like Rock Harbor, Tavernier and Plantation Key. The traffic out of the Keys was now heavy with lots of slow moving backups. Inbound was not too bad, though it had lots of big boats and RVs.
Rain fell off and on, but the heaviest showers missed me. Lots of lightning to watch was a highlight of the day. The bike lane alternates with a bike path as the best option for cyclists, though I never saw any other serious riders. Just a few on the their beach bikes were using the bike path.
Islamorada was next, a much bigger town. Just the same as Key Largo, Islamorada had everything. The bigger towns are well-stocked with good businesses, including grocery stores, restaurants and convenient stores.
Layton and Key Colony Beach were the next small places, before I reached what many consider the mid-point of the Keys at Marathon. That is where I will spend the night. Motel prices are high in this area, and the motel manager told me that it has been that way for some time. From what I hear, the cheap motel prices from most of the rest of my journey are done for.
Still, I got a good deal on my unique and spacious little apartment-type room. It is one of the most colorful of my whole trip.
One of the hardest issues from today was a strong headwind when I rode across the bridges. The storms were pushing wind around from all directions, but the wind seemed always to be in my face on those bridges. There is the famed Seven Mile Bridge remaining to conquer. I hope to get it done early in hopes of a lesser wind.
Total mileage for today was 84. Tomorrow is up in the air at this point. I have a plane ticket to return home on Thursday. That was my best guess before the ride started, especially with the possibility of hurricanes or bike issues. Rooms are very expensive in Key West so I am working with Allison Tucker of Travels by Allison to decide the most economical choice for the rest of the week. There are just 50 miles remaining until the end of the journey. Just one more ride will complete another adventure.
Rowan County resident David Freeze is cycling from Bar Harbor, Maine, to Key West, Fla. Contact him at david.freeze@ctc.net.