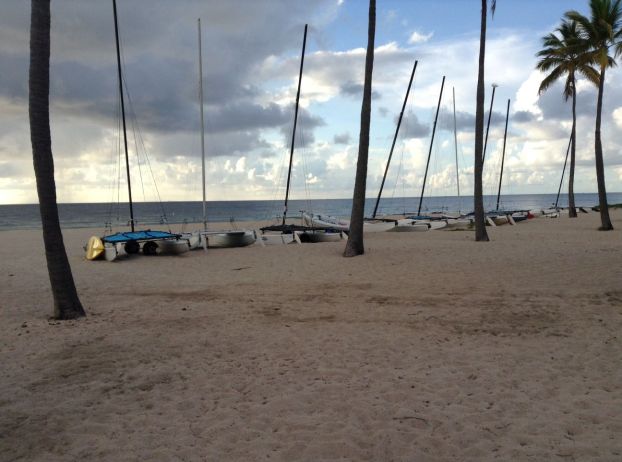 Through Miami, next the Keys

On a Saturday morning, I didn’t expect much traffic early. Almost no cars were on the road, but plenty of exercisers were, even as the sun was coming up. The air was thick with humidity and the temperature was around 78. Probably not that uncommon for South Florida Beaches, but warm for me.
I left my great room at Pompano Beach, and headed out on A1A toward Lauderdale by the Sea and Fort Lauderdale Beach. The hotels got huge right quick, but I was impressed with the area for cleanliness. I had no trouble riding through, even though the traffic was slowly building.
After intersecting U.S. 1 again, I was supposed to go around the Fort Lauderdale/Hollywood International Airport. But somehow I got on the wrong road and was mixed up with hundreds of cars heading for arrivals and departures. I couldn’t figure out how to get out until I saw a huge hole in a concrete wall. With a lot of luck, I crossed over to the regular highway, and after asking directions was back on U.S. 1 South again.
Rain had started to fall, and would be off and on for the rest of the day. As I write this, a huge thunderstorm is going on outside my motel window. Once again, I made it inside in time.
After the airport incident, I had to find A1A and head toward Dania Beach, Hollywood and Hillandale. Good bike lanes, decent drivers and pleasant scenery made up most of the rest of the morning. The hotels got bigger and bigger as I headed toward Miami. I was impressed also with politeness of the drivers in this area.
By the time I got to Miami, there was surprising flooding in the Miami Beach streets. The amount of rain did not seem to be so much to have caused this, but regardless, flooding of a couple of feet made a few streets impassable.
I got lost again trying to get out of Miami, and finally found the Venetian Lane that was actually a toll road for cars. Bicycles were free this time. Quickly, I found myself square in the middle of downtown Miami and searching again for U.S. 1. After backtracking and finally finding it, I got myself mixed in with some of the meanest traffic since New Jersey. No shoulders were available, and the traffic was in a big hurry. About that time, I discovered that Dade County had built a separate bike lane under the metro tracks. It was hard to follow at first, but got easier. Dade County had the bike lane weaving in and out of its metro stations too. After a few miles it opened up and I rode the bike lane most of the way to Homestead, where I will spend the night.
Without a place to stay, I called around and got a price of $70-$80 for a room. Just one more stop found a better price at a Day’s Inn. That is where I am watching the storm from. Total mileage for today was 74.
Tomorrow, I will head down the first part of the Keys with plans to stop near Marathon. Since I am ahead of schedule and can’t fly out till Thursday, I will do some exploring as I head south.
The bike did well again, and honestly the lighter bike is like a reward. I am expecting two more days of riding and a few more weather issues. It does look like the tropical storm is going to stay east of here. Another adventure tomorrow.