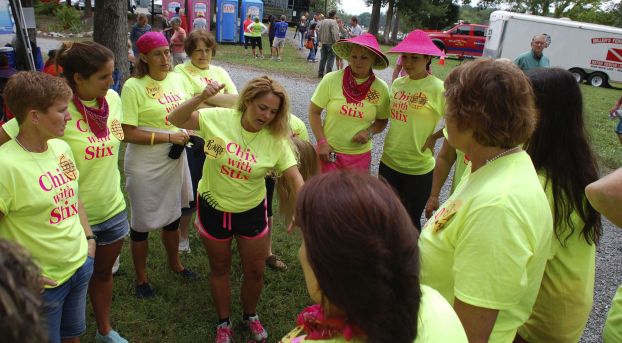 HIGH ROCK LAKE — Cram 20 novices into a narrow, 45-foot-long boat, have them paddle frantically to the beat of a drum and ask them to do it three different times — you might figure it’s a recipe for disaster.

But the Rowan County Chamber of Commerce’s first-ever Dragon Boat Festival Saturday proved to be a day of fun, teamwork and stout competition among mostly local paddlers.

The majority of participants had never set foot in a dragon boat before, except for practices earlier in the week. By day’s end, many of the local competitors were talking like dragon boat veterans.

“You can feel the boat rise off the water when you’re doing it right,” said Greg Philpot, a member of the Novant Health Well-Ness Monsters.

This inaugural Dragon Boat Festival, the brainchild of Chamber President Elaine Spalding and chaired by Ann Pressly of Trinity Oaks, had as many as 23 teams express interest. In the end, 20 teams registered and 16 wound up competing.

Overall, about 800 people turned out for the event, headquartered at the Rowan County Shrine Club’s High Rock Lake property at the end of Long Ferry Road.

The boats sport dragon faces, a scale design on the sides and tails, and they represent a tradition going back 2,300 years to ancient China. Besides the 20 paddlers seated in the boat — 10 rows of two abreast — the boats include a drummer setting down the rhythm of strokes and a steerperson standing at the stern.

Unless a visiting team brought its own, High Five Dragon provided the boats, paddles, life vests and steerpersons. The company also directed and timed all the races.

The rules for Saturday’s boat races at High Rock Lake required teams to have at least eight women paddlers, though several teams had all women.

The course was a straight 350-meter shot paralleling the shoreline of the Shriners’ property, with the finish line near the Shrine Club’s building on the point.

The event raised money for the Chamber of Commerce’s small business program. Pressly said many people approached her Saturday to encourage the Chamber to sponsor the festival again next year.

Spalding said the Chamber had not done a fun, summertime fundraising event in awhile. Her board members advised against a golf tournament, because so many already are being held.

Spalding was familiar with dragon boat races from her previous stops in other parts of the country. She thought the Dragon Boat Festival would be a good way to offer a new experience, enjoy High Rock Lake and show it off to people.

It also provides, Spalding said, a classic team-building exercise for the companies and organizations that compete.

Some local teams were just borne from friendships, such as the all-women Chix With Stix, and the Yadkin Yaks, who included lake residents and members of First Baptist Church.

Most teams set up tents to provide a resting spot between races and a place to congregate for lunch. Saturday’s vendors included United Beverage, Cheerwine, Chick Fil-A, the Kabob Food Truck, the Super Snack Shop, Correll’s Mobile Concessions and Teriyaki chicken on a stick.

U.S. Rep. Richard Hudson, R-N.C., arrived to the lake early in the afternoon to watch the final races. The day was overcast but comfortable, with some drizzling rain in the morning.

Christine Canevari, director of marketing and administration for High Five Dragon boat, said some of these competitions can draw as many as 180 teams and have races over two days.

She said High Rock Lake turned out to be a great venue, with calm water for the most part. The overcast day turned out to be a blessing, Canevari said, because it cut down on the number of motorboats creating turbulence for the dragon boats.

The competition got off to an auspicious beginning Saturday morning when High Rock Lake Association’s boat, preparing to cross the finish line with a victory in the first heat, was overturned by the wake from a passing motorboat.

“I was in it, under it, everything,” a wet Carroll Tysinger said back at his team’s tent. He reminded the High Five steerperson, who said he had never gotten wet in five years of dragon boat racing, that he was wet indeed.

The team drummer, Shirley Price, went into the drink with everyone else.

“The drum is attached, but the drummer is not,” she said.

By lunchtime, Kay Jones was wearing her third shirt.

“We’re the only ones who have a special memory,” Price said.

Larry Jones said he was proud of the association’s team because it probably represented the oldest group among the dragon boat competitors.

Pressly, who also served as captain of the Trinity Oaks team, said its 20 paddlers ranged in age from 27 to 70 and included three residents.

Trinity Oaks ended up edging its arch rival for the day, Trinity Place, to capture first place in the C Division.

Oshi Sims, a member of the Trinity Place boat, sported her team’s “We’re Not Draggin’” T-shirt. But Sims acknowledged she was dragging after the first two races.

“It’s something new,” she said. “Like I could lay down now and not get up for hours.”

Teammates Elaine Story and Carmen Whitley were excited Trinity Place shaved 30 seconds off its time between the first and second races. Whitley said the key is, “Listen to your drummer.”

“That made a huge difference,’ she added.

Over the lunch break, Punkie Jenkins gathered the Chix With Stix team around her and said the start in the next race would be key. The paddlers would have to pull hard in their initial strokes to get the boat on top of the water, Jenkins advised.

“Once it gets up there, you will feel it,” Punkie promised.

The mostly local Chix With Stix team included four “ringers” from Pittsburgh who are friends with Susan Linza: Kristen Coppola and Katy, Beverly and Donna Broskey.

As with most of the paddlers, they were drenched on the sides of their bodies which were closest to the water.

“It has already exceeded our expectations,” Spalding said of the Dragon Boat Festival. “It turned out to be a great way to show off High Rock Lake.”