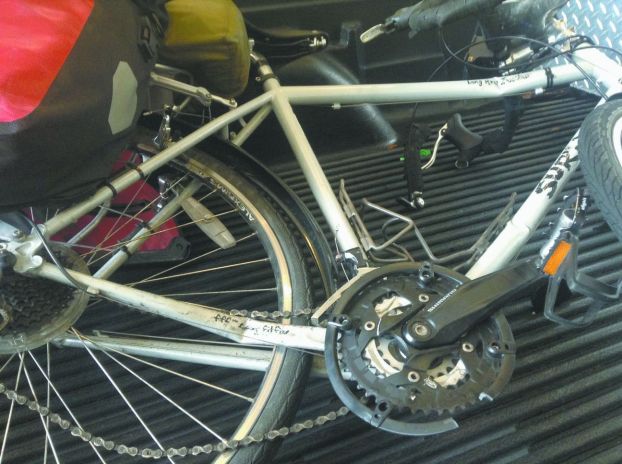 More on the crash and recovery

Yesterday afternoon was developing like most days. I was pushing on with a goal in mind of where to end the day and thinking about how it would set me up for the following day’s ride. The sky was stormy, but the latest round of showers was still in the distance. The road was good, though busy, as I passed through a pretty part of Tequesta, Fla., just before Jupiter.
I noticed a Publix grocery store and a Wendy’s on the right, and then noticed a black car coming right at me out of an exit to the parking lot. I took a chance to cut left as quick as I could, and screamed “No!” I thought I had missed her, and then she hit me. The car pushed me over on my left side, and I hit the pavement. I sensed that the bike was right there too, and I saw that her bumper was above my head but turning.
In just a few seconds it was over. The lady realized that she had hit me and parked partly on the raised sidewalk. Two cars stopped behind me, and I remember looking at one of the drivers and telling her, “She drove over me.” Somebody else told me not to get up, but I realized that the bike was in pieces and some of her car was there, too. I got up and carried it over to the sidewalk.
By that time, the fire department and police department were already pulling up, and traffic was stopped all around. They wanted to know if I was hurt, and I didn’t think so. They checked my pulse and BP, but didn’t tell me the readings. Josh Kitzi, Dan Tilles and Peter Allen eventually gave me and the bike a ride back to the fire station, then took me to the bike shop in Hope Sound.
Dawn Arvin and Matt Gebhart pretty much dropped everything at Bike Street, then got me a suitable bike ready. Matt took the parts that were usable off my Surly. Dawn tried to find me a room, but didn’t have success going in the right direction.
They got me going, then they got me back to the spot of the accident. I mounted the bike, knowing that I needed to still ride some that afternoon. It was odd to ride past the very spot where the accident occurred.
I found a great room at the Hampton Inn. Andy, the desk clerk, was amazed about my ride and posted a link on the Hampton Inn website to the Post.
Last night, I sorted it all out during a fitful night. I couldn’t wait to get going again this morning. I have no other knowledge than that God was once again riding with me because of the prayers that both you and I have offered.
I have a bruised big toe, five road rash places and a tender rib on the left side. That is it. Those prayers worked again.

Your daily look at late-breaking news, upcoming events and the stories that will be talked about today: 1. GAZA TRUCE... read more