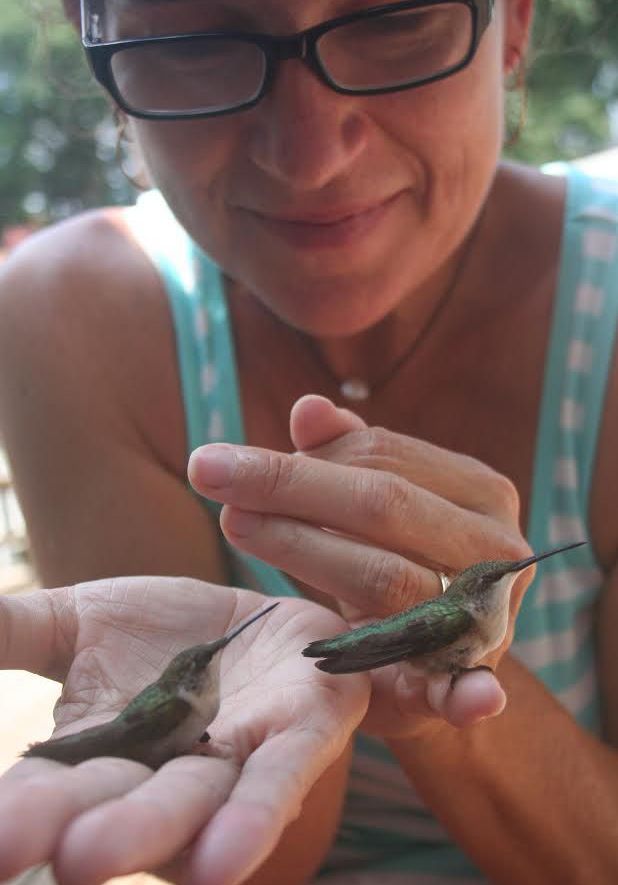 On an uneventful Saturday evening I turned to Facebook to stir something up. “What’s making you happy right now?” I asked.
I highly recommend posing this question. People like to share what makes them happy, and joining in a chorus of “happy” is bound to lift your spirits.
Not surprisingly, food dominated the responses (chocolate Nutty Buddys, Sweet Frog frozen yogurt, grilled tuna with local corn and tomatoes, tacos, lemonade and cookies from a neighborhood stand, Krispy Kreme donuts and tomato pie).
Also making people happy were cats purring on laps, a Ray LaMontagne concert, a Janet Evanovich book, kitchen reorganizing, the feel of warm, squishy flip-flops and … caulking (all righty then, Chris Verner).
Sitting on the patio and watching hummingbirds eating and flitting from bee balm to black-eyed susans to crape myrtles was making Julie Gainer happy.
Her post reminded me of a photo Cara Reische shared recently of herself with a pair of hummingbirds perched on her fingers. “Jon (Palmer) and I heard two hummingbirds hit the window this morning,” she wrote. “After a few minutes of being held and reassured (you CAN fly!) they went along their merry ways. Such amazing creatures!”
That was a great story, but then Nina Dix chimed in with an equally wonderful story about saving a hummingbird’s life:
“Hummingbirds used to get into our shop and tire out trying to get back out the top. I had an experience with one once that I will never forget. I was at work and a tired hummingbird landed on the overhead plumbing pipe. It was so tired it nearly fell off. It hung on beneath like a bat. We had to get out a ladder to get it. When I got it in my hands, it was lifeless.
“I started thinking about all I knew of hummingbirds (not much). But I had heard they need to eat frequently to fly. Not a lot of nectar in a machine shop. So I immediately took off running down our long dirt driveway to where I had seen some honeysuckle last time I had been on the tractor mowing.
“I grabbed a little flower, held the hummingbird’s head up, stuck his beak inside the flower. Then another. I could feel his tongue move in and out of the flower as I was holding it between my index finger and thumb. As it ate I looked at every detail of his little body. His eyes were so tiny and he had little hairlike feathers over his eyes that looked like eyelashes. I studied him hard because I knew this was one of those moments you never forget. After maybe 30 seconds he began to move, so I opened up his palm. He stood up, shook a little, and took off like a bullet.”
Serendipitously, as I was considering how much joy these tiny little birds give us, photographer Wayne Wrights posted a gorgeous close-up of one of the magnificent creatures, and he graciously agreed to share it.
Nature was also making Bailee Johnson happy, in the form of unexpected pumpkin vines in her front yard. The surprise pumpkin, she wrote, “made me happy enough to plant my own in the garden in back.”
Nature manages to find ways to surprise us. I remember years ago when my husband cut back a bunch of wisteria vines in our yard. I thought he’d killed them, and I was sad at the prospect of the blossoms not returning.
One spring day I found a note from my daughter Quinn, who must have been about 11 at the time. It said, “Look at the pretty purple flowers on the bush you thought was dead!”
The flowers from a “dead” bush came at a very tough time in our lives, when Quinn was being treated for a stubborn brain tumor and when moments of joy were often tempered by an encroaching sense of dread. Fortunately, the things we feared did not come to pass — Quinn just graduated from college and is preparing to teach a class of second graders this fall.
I keep Quinn’s note as a reminder: to stop worrying so much and to always watch for the purple flowers.

What’s making you happy? Email me at salposthappy@gmail.com