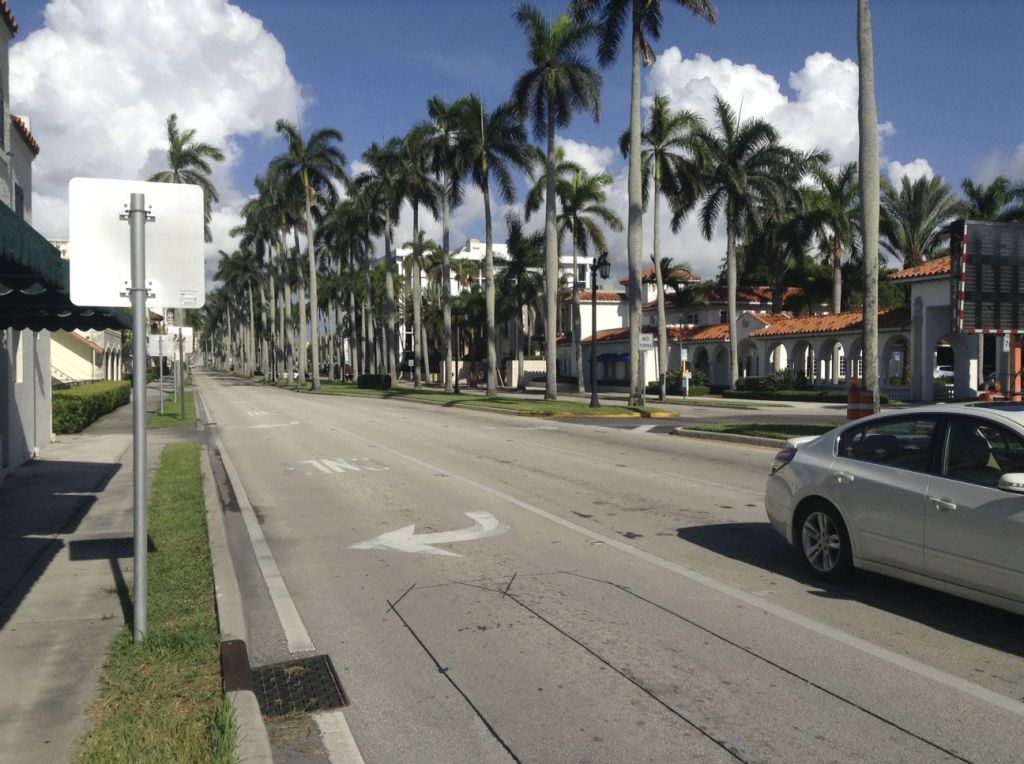 I had a fantastic room last night at the Hampton Inn in Juno Beach, but that didn’t help me sleep. I was up late, then couldn’t sleep past 4:30 a.m. After a good Hampton Inn breakfast, I was out the door with plans to put some real time on the new bike.
First thing, I leave the motel and find a woman’s wallet with money, cards, etc. It felt good to start the day by turning it in at the registration desk. I got on the bike and headed south, getting used to the shifters and gearing of the Trek 1000 bike. It is all much different than the Surly that I have been riding for two years. I do like the fact that the bike is much lighter and hope it will last for the home stretch to Key West.
For at least a couple of hours this morning, I rode past bunches of million dollar homes. Usually, when riding by these homes, I get to see the gate but not the ocean. It does get old after a while, but the morning was passing by as I rode through Riviera Beach, Palm Beach, West Palm Beach and South Palm Beach. It was about this time that I took a wrong turn following A1A, and it didn’t feel right. I stopped and asked a policeman who assured me that I was right. It still didn’t seem good to want to ride the beach and I was going away from it. A stop at a 7/11 proved I was right, so I rode back by the policeman and pointed the correct way. He was behind tinted windows, so I couldn’t see his expression.
Just as I returned to the right road, Gerard Guarino rode up beside me and we started talking about all things biking, traveling, running and the traffic was just light enough to let us ride side by side to enhance the conversation. We rode for about eight miles together and then Gerard headed back to his home in Lake Worth which is mixed in with all the Palm Beaches.
That left me about 25 miles more to ride, and I continued to follow A1A. A few miles later, I heard Gerard again. He went home and wanted to see if he could get me to stop by for breakfast, so he caught me again. We talked some more, but I eventually kept on going. Gerard was the highlight of the day. It is great to meet people like him and Sherry Starr the other day out on their bicycles, too.
On I rode through more exclusive homes. Beaches included Ocean Ridge, Boynton, Delray, Highland, Boca Raton, Hillsboro and Deerfield. There were lots of great views of both the ocean and the river side where most of the boats are parked. I enjoyed riding over lots of bridges with even more great views. All along the way, lots of runners, cyclists and walkers were out. Most were friendly and returned my greetings and waves with a smile,
Pompano Beach was next, a place where I started to consider leaving the road a little early because of two things. I am way ahead of pace for the whole ride at this point, and I needed to spend the night somewhere soon to allow for a good day heading through Miami tomorrow. After a few calls, I considered getting a place close to the beach. That is exactly what I did. I got this great room at the Sea Cove, a throwback motel. I have an oven, microwave, refrigerator and shuffleboard. They let me borrow a beach chair and I had a great time sitting on the beach for a couple of hours while answering messages.
Later, my food came from Walgreen’s and I got two ice creams. Felt good, too. Now with just 54 miles complete and settled in Pompano Beach, I will head through Miami by late morning tomorrow and spend the night near Homestead. Homestead will be the jumping off point for the Keys.
The homestretch is nearly here. Just about 200 miles to go. It has been a wonderful adventure so far, but I have seen Miami. Never have I been farther south. That starts tomorrow afternoon.
Rowan County resident David Freeze is cycling from Bar Harbor, Maine, to Key West, Fla. Contact him at david.freeze@ctc.net.